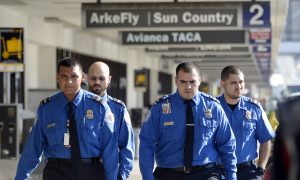 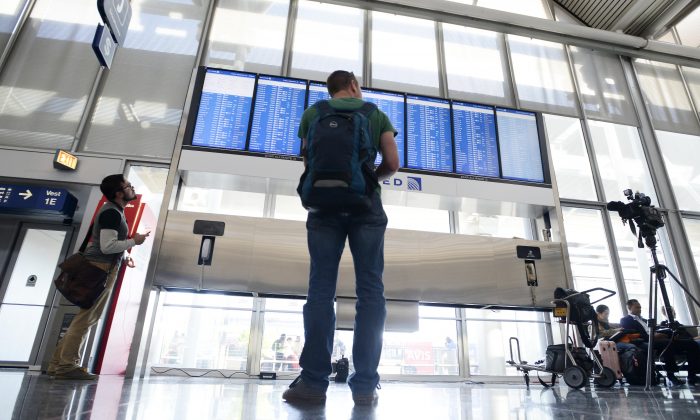 Dennis McCormack of Rockaway, N.J. checks the departure board only to find out that his flight to Newark, N.J. has been canceled at O'Hare International Airport in Chicago, Friday, Sept. 26, 2014. (AP Photo/Paul Beaty)
US

CHICAGO—Jetliners roared down O’Hare’s newest runway as Chicago officials cheerfully touted the latest piece of a decade-long overhaul as a tipping point that could cut delays in half and dramatically improve the reputation for bottlenecks at one of the nation’s busiest airports.

But in the year and a half since that celebratory event, delays have been even more common than in the five years before the strip opened, according to an analysis by The Associated Press.

From the runway’s opening in October 2013 through this past March, nearly 28 percent of departures have been delayed, compared with 22 percent over the five previous years, according to the latest available data from the Bureau of Transportation Statistics. Arrival delays tracked a similar 6 percentage point increase, hitting 26 percent. The jump was double the national increase.

The poor results raise the prospect that the complexity and enormity of O’Hare, combined with its vulnerability to problems originating elsewhere in the nation’s air system, will sometimes swamp whatever performance gains come from the more efficient design that planners are etching into the 72-year-old airfield.

Other U.S. airports, including the nation’s busiest, in Atlanta, are also seeking more capacity by adding concrete and are seeing some improvement. O’Hare’s $9 billion program, funded in large measure by fees passed on to the public in flight tickets, ultimately envisions eight runways, six of them parallel, compared with seven crisscrossing runways before.

Passenger advocates say Chicago officials might have set the stage for disappointment by making specific, bold promises on delays.

“It’s easy to hype and raise expectations, and the unfortunate thing is that the people who make these promises are not the ones actually doing the work and may not even know just how hard the work is,” said Douglas Kidd, director of the National Association of Airline Passengers.

As O’Hare prepares to open yet another parallel runway this October, the data points to the risks of attaching promises to costly improvements at airports when performance depends to a large degree on a multitude of factors beyond anyone’s control.

The winter that followed the runway’s opening brought the polar vortex and extreme travel disruptions. In May 2014, a malfunctioning ceiling fan led to the evacuation of a suburban air traffic site. Then, four months later, there was another crippling shutdown when an FAA contractor set fire to sensitive communications equipment in an act of sabotage.

However, the AP’s review found delay figures were still worse even when excluding the worst weather month and the three months affected by those air traffic stoppages.

Then, there were everyday problems such as too many planes and not enough available gates. The persistent disruptions have meant pain for individual travelers — sometimes stranded on tarmacs and in terminals for hours — and accelerating waves of air travel disruption from coast to coast.

“It was all the worlds colliding into what turned out to be this really miserable experience,” said trade association executive Ellen Davis of Arlington, Virginia, describing a February night stranded at O’Hare by multiple gate problems and having to sleep on a cold bench with her 4-year-old son.

In another troubling sign, flights out of O’Hare arrived on schedule at their destinations less than 68 percent of the time last year, the worst result out of the last seven years. A standard industry metric on delays — and the one the city promised would plummet — also worsened since the runway opened, approaching a level that aviation experts label as “very significant congestion.”

Karen Pride, a spokeswoman for the city’s Aviation Department, said she still believes the delay-reduction forecast from the new runway is achievable and pointed to an initial drop in disruptions following the modernization program’s first runway projects in 2008.

Yet the weaker performance recently comes despite the fact that the airport is also under far less strain today, with around 110,000 fewer takeoffs and landings last year, compared with a peak a decade earlier.

And the 2013 runway was supposed to bring the steepest drop in delays yet because that was the tipping point where air traffic shifted to a primarily east-west pattern, allowing for more landings and takeoffs even in low visibility.

Some of the trouble was directly related to the modernization work, which is shifting the airport’s footprint to a more-efficient side-by-side layout now that modern aircraft are equipped to handle the crosswinds that once made crisscrossing runways a necessity.

O’Hare’s busiest departure runway was closed for six months over the summer and fall of last year because of taxiway construction linked to the project.

But there were months when the runway closure by itself was evidently not much of a roadblock. Last July, one of the busiest travel times of the year, had a smaller percentage of delays than the year before, despite the runway shutdown.

There have been some signs of improvement, including the fact that even in poor visibility controllers are sometimes able to land the maximum 100 or so arrivals per hour thanks to the safer air pattern.

But at a massive hub as busy as O’Hare, any given year can bring the unexpected.

“It hasn’t been a typical year,” said Tony Molinaro, an FAA spokesman. “I don’t know if any year is ever going to be typical, but it hasn’t been.”