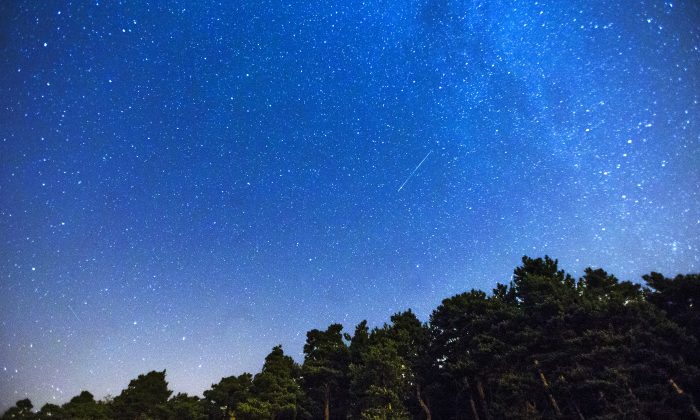 Two Perseid meteors, centre and lower left, streak across the sky during the annual Perseid meteor shower above a forest on the outskirts of Madrid, in the early hours of Monday, July 28, 2014. (AP Photo/Andres Kudacki)
Science

The Perseids Meteor Shower has started and now is the best time to view it because the peak dates will occur at the same time as the full “supermoon.”

A full moon, or a supermoon, will happen on August 12 into the morning of August 13–the same time that the Perseids is set to peak. A supermoon means that the full moon is closer to Earth than usual.

The moon will get brighter and brighter leading up to the full moon, meaning that the best time to see the Persides is the next couple days.

Peak dates for the Perseids typically see a meteor count of up to 100 meteors per hour, but meteors should be easily visible even outside the peak. The Perseides “meteor shower is known as one of the best meteor showers to observe, producing fast and bright meteors that frequently leave trains,” according to NASA.

The shower started producing meteors over the weekend, with at least five fireballs being detected by NASA cameras.

The fireballs as part of the shower are associated with the comet Swift-Tuttle. Each year around this time, Earth passes through a cloud of the comet’s debris.

“These bits of ice and dust — most over 1,000 years old — burn up in the Earth’s atmosphere to create one of the best meteor showers of the year. The Perseids can be seen all over the sky, but the best viewing opportunities will be across the northern hemisphere,” NASA says. It also recommends going to a dark place away from city lights. Astronomers also recommend not using cell phones to enable eyes to adjust faster.

The meteors radiate from the direction of the constellation Perseus.

The next meteor shower will be the Orionids, which start on October 2 and run through November 7. The shower is slated to peak on October 21 and October 22.

“With no moon to interfere with the dark skies, 2014 promised to be a favorable year for viewing the meteor shower,” according to NASA. “The Orionids, formed from the debris of Halley’s comet, are known for being bright and quick meteors.”