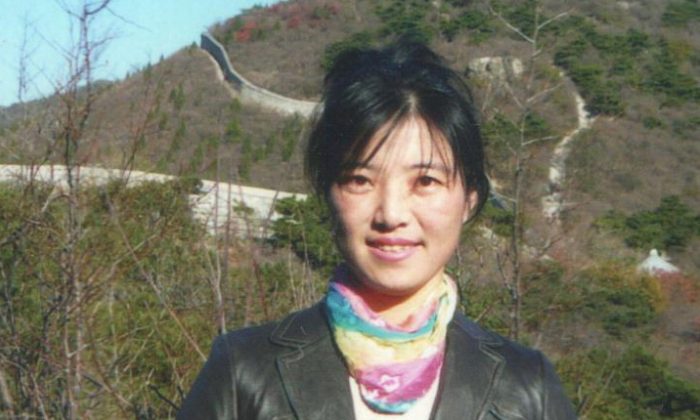 Ma Chunling, a practitioner of Falun Gong, was released from Masanjia on Aug. 30, 2013. Her sister in the United States said the camp is on the way to closing down, as the 14-yearlong campaign against the Falun Gong spiritual practice seems increasingly difficult for the Communist Party leadership to sustain. (Ma Chunling)
China

The persecution of Falun Gong used to be the highest priority for the leadership of the Chinese Communist Party, when it started the campaign under the orders of Jiang Zemin, a former head of the Party, in 1999.

Now, over 14 years later, the campaign appears to be entering a new phase as the political clout of Jiang, who saw the persecution as a personal crusade, has waned significantly and his control over key positions in the security apparatus has been undercut by political infighting.

According to statistics produced by Minghui.org, a major Falun Gong website that tracks the persecution, the number of Falun Gong practitioners sentenced to labor camps and prisons has been decreasing steadily over the last 18 months.

Minghui has also documented that a number of labor camps in different regions of China appear to be shutting down. In some cases the Falun Gong practitioners detained there are being released.

This trend is a break from the past, where “eradicating” the peaceful spiritual discipline was the foremost political priority for the Chinese Communist Party, mass book burnings were held in the streets, and state television stations conducted 24-hour propaganda marathons.

Even so, the changes over the last year do not mean the persecution has stopped, according to experts. But they indicate that the campaign is not being given the intensive political emphasis it was once given, and that in certain regions of China it is unable to be sustained.

This year the new Chinese Communist Party leadership, under Xi Jinping, announced that it would halt or reform the labor camp system. The claim was initially met with some skepticism, but human rights groups said that some changes are taking place, with particular labor camps being shut down. In other cases they are simply renamed as drug rehabilitation centers, while the same abuses inside them take place.

In mid July two forced labor camps in southern Beijing released a number of Falun Gong practitioners who were detained there, according to Minghui, the Falun Gong website.

Separately, the Xidayingzi Labor Camp in Chaoyang City, Liaoning Province, in July released over 10 practitioners, according to Minghui.

Some Falun Gong adherents have also reportedly been released from the most notorious of the labor camps, Masanjia, in the northeast of China. Minghui reported in late August that all male detainees from Masanjia had been released, and that the camp has not taken in new detainees since October of last year. By late August, it said, only eight female practitioners were left.

“My younger sister was released from Masanjia on Aug. 30,” wrote Ma Chunmei, a Falun Gong practitioner in the Washington, D.C. area, in an email. “The Masanjia Forced Labor Camp is basically disintegrated.” Epoch Times had previously reported on the Ma sisters, and the attempt by Ma Chunmei to have her younger sister released.

In an opinion article, Minghui said that despite these recent releases, and the regime’s promise to reform the labor system, “this does not mean the Chinese Communist Party (CCP) will stop doing evil.”

According to Levi Browde, the executive director of the Falun Dafa Information Center, the enormous resistance that Falun Gong practitioners have put up to the persecution has also had an impact.

“Literally hundreds of thousands of practitioners have been working day in and day out for years, telling their neighbors what’s going on. Everyone from housewives to high level officials has been told,” Browde said.

In the past year there have been half a dozen petitions launched by villagers in different parts of China, including one with 15,000 red-wax thumbprints in Heilongjiang, northeastern China, demanding that detained Falun Gong practitioners be released.

In recent years, too, Chinese rights lawyers have been defending Falun Gong practitioners in judicial prosecutions, something that would have been unthinkable earlier in the persecution, when they were prevented from entering the courtroom.

Minghui regularly carries reports of Chinese Communist Party officials saying that they will not participate in the persecution any longer.

“The Chinese people and cadres in the Communist Party are turning away from this persecution,” said Browde.

Despite the anecdotes, it is still impossible to get a complete picture of the status of the persecution in China, and even the news of labor camps being shut down should be treated with some circumspection, according to Corinna-Barbara Francis, a researcher on human rights in China with Amnesty International.

“I think we have to be very cautious about what is going on here. Are they shutting down the reform through labor camps, or are they just transforming them into drug camps?” she said in a telephone interview, referring to drug rehabilitation centers that can in some cases still be used to detain political prisoners.

Alongside the instances of releases, the number of Falun Gong practitioners sent to forced labor camps has declined over the last 18 months, according to data from Minghui. The number of prison sentences, and the number of cases recorded of persecution in general have also all declined this year relative to previous years.

Overall, all instances of persecution appear to have declined somewhat from previous years, with a total of 1,727 reported by early September this year, according to Minghui, where the yearly average for the last five years was close to 6,000.

Minghui’s data is believed to capture only a fraction of the cases of persecution in China, but over time the data does help identify trends. However, a time lag in reports—Minghui may receive reports months or years after events occur—complicates the picture.

Neither the releases nor the declining trend lines show that the policy itself of targeting Falun Gong practitioners is being reconsidered, according to Francis. “We’re continuing to see some very long prison sentences. There’s no significant backing away from the general policy.”

One of the major obstacles that Party officials faced in shutting down the labor camp system was resistance from the Political and Legal Affairs Committee (PLAC), the secretive and powerful Party agency that oversees the security apparatus, according to Yiyang Xia, a researcher at the Human Rights Law Foundation, a Washington, D.C.-based legal organization that has initiated litigation against Chinese officials for human rights abuses.

A long feature article in Caijing, a well-known business magazine in China, alluded to this: “Among those in the labor camp system now, a large portion are ‘heretical religious elements.’ How to deal with this group of people has become a difficult problem for the reform attempt. Researchers in the judicial system believe that the existence of this group may be the reason that there is no way to entirely get rid of the labor camp system.”

The group referred to is Falun Gong, said Xia.

“The security apparatus was using Falun Gong as an excuse not to do any reform,” he said. “But now it seems that the decision has been made.”

Out of the Labor Camp, into the Brainwashing Center

Aside from the aggregate data, the way the transition between forced labor and brainwashing center, or labor camp shutdowns operate across the country differs from region to region. In many cases, violence is still perpetrated.

Falun Gong practitioner Yue Chunhua, for example, was stripped naked, beaten, and had a tough-bristled toothbrush thrust into her vagina as torture, according to Minghui.

Liu Yongping, a practitioner from Beijing, refused to sign a statement renouncing his faith during the recent releases. He was transferred to Beijing brainwashing centers by personnel with a local 610 Office and the “zongzhi ban,” or comprehensive management office, which is part of the Party’s security apparatus, according to Minghui.

The 610 Office is an extralegal Party agency established for the purpose of carrying out the persecution of Falun Gong, while the “zongzhi ban” often use offices in residential areas for managing local Party affairs. Jiang Zemin, the former Party leader, personally oversaw the establishment of the 610 Office, and gave it its mandate.

“It was Jiang Zemin who drove the persecution, by promoting his lieutenants through the ranks and demanding quotas for brainwashing,” said Browde, of the Falun Dafa Information Center. “The persecution became a litmus test for allegiance to Jiang and to the Party. Now the security apparatus has been handed to other people.”

Browde, like Francis, was wary of speculating on elite Chinese political dynamics, but he said: “If there are areas that are persecuting less, maybe that speaks to the lessening influence of Jiang and his faction.”

The remnants of Jiang’s group, however, and in particular the officials in the security services who built their careers through persecuting Falun Gong, will continue carrying out the campaign despite the lack of new energy being injected by the central leadership, according to Yiyang Xia, the researcher.

“The policy hasn’t changed at all,” Xia said in a telephone interview. He said that the persecution would only officially end if the Standing Committee of the Chinese Communist Party held a meeting and issued a new policy.

The highly political nature of the campaign, however, and the abuses that have been conducted in the furtherance of it, are such that any Party leadership is unlikely to want to confront them, he said. “That wouldn’t happen before redressing the Tiananmen Square massacre, because this issue is much thornier.”

Francis from Amnesty International said that “any kind of formal overturning” of the campaign is unlikely because it would have “huge implications for the entire system, and all sorts of issues of accountability.” She continued, “There is a large number of officials and prison directors who could be targeted for prosecution for torture and mistreatment if there was a formal recognition.” This would be “a huge deterrent to any kind of formal overturning of the policy.”

Yiyang Xia said, “As long as the policy doesn’t change, those in the security apparatus, who have blood on their hands and are invested in the campaign, will continue the persecution.”

Correction: Liu Yongping, a Falun Gong practitioner from Beijing who earlier this year was sent to a brainwashing center after refusing to sign a statement renouncing his faith when the labor camp he was detained in closed down, is male, not female.