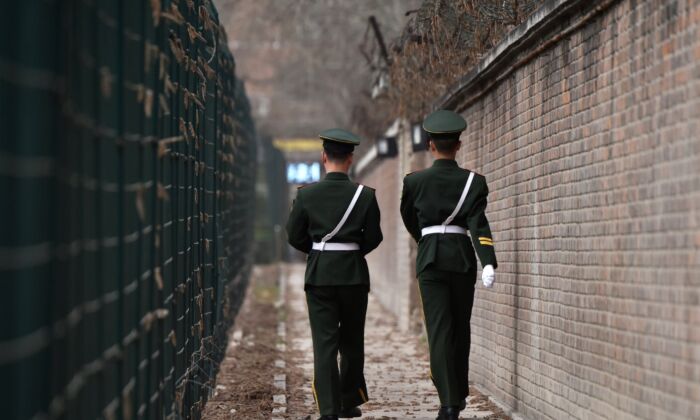 The persecution of Falun Gong, which started in July 1999 in China, is still going on today. Leaked Chinese Communist Party (CCP) internal documents indicate that Beijing is tightening up control of its political and legal system while keeping the persecution going.

Falun Gong, also known as Falun Dafa, is an ancient Chinese spiritual practice consisting of slow-moving meditation exercises and moral teachings that promote truthfulness, compassion, and tolerance in everyday life. Its popularity peaked in the late 1990s in China, with 70 million to 100 million adherents, according to official estimates.

The CCP’s top security agency, the Political and Legal Affairs Commission (PLAC), is a gigantic and powerful network of suppression. It’s the main tool in the CCP’s persecution of Falun Gong, and the PLAC’s power, as well as level of corruption, has grown incessantly as the persecution continues.

In January 2019, the “PLAC Regulations,” touted as the first-ever set of regulations for the PLAC by China’s state-run media, was released. It consists of three parts, with only the first part, “Regulations of CCP Political and Legal Work,” being made publicly available.

The Epoch Times obtained a 161-page document (pdf) that includes the first two parts and the index of the third “top secret” part.

The top-secret part is divided into “political security,” “social stability,” and “legal affairs.” Seven of the 17 articles under “political security” are directly related to the monitoring and “transforming” of Falun Gong practitioners. In the CCP’s language, “transforming” Falun Gong practitioners means forcing them to sign papers to denounce their belief and promise to stop practicing, according to FalunInfo.net.

According to state-run media reports, Beijing has been sending out inspection teams to tour the country and check on the implementation of the PLAC Regulations by provincial and municipal level PLACs. In CCP leader Xi Jinping’s view, when conducting political and legal work, the PLAC system must ensure the “absolute leadership” of the CCP.

Tasks to Carry Out the Persecution

Another 76-page document (pdf), leaked from Tieling city, Liaoning Province, offers some details about the top-secret section of the PLAC Regulations. Dated April 2020, it includes a series of tables detailing quantifiable tasks to “maintain political security.” The tasks, mainly targeting Falun Gong practitioners, are to be carried out by the municipal PLAC and public security bureau.

The major quantifying factor is the “transformation rate,” measured by the number of Falun Gong practitioners who signed a document saying they would give up the practice. The transformation rate is translated to scores for the agencies, and directly linked to their bonuses and compensation.

Cases of Persecution in Liaoning Province

Tieling city’s Public Security Bureau was headed by Wang Lijun for eight years. Wang later became the deputy mayor and police chief of Chongqing, the largest of the four direct-controlled municipalities in China.

In February 2012, Wang Lijun fled to a U.S. Consulate with incriminating documents about his boss Bo Xilai. This event triggered a murder trial, an avalanche in the PLAC system resulting in the purge of Bo Xilai and Zhou Yongkang, the heads of the PLAC.

In 2002, when Wang was the police chief of Tieling, he ordered the arrest of a group of Falun Gong practitioners who were secretly gathering video footage of persecution in local prisons and labor camps. The videos were supposed to be sent overseas. Through cell phone tapping, the police arrested the practitioners involved and confiscated the videos. Under Wang’s orders, the police brutally tortured the practitioners. Wang said it was an important case and that the police would be heftily rewarded, according to a minghui.org report.

Yin Liping, a Falun Gong practitioner from Tieling, was among those arrested and tortured. Before she left China, she was arrested and incarcerated six times in Tieling and other cities in Liaoning Province.

In April 2001, Yin and eight other female Falun Gong practitioners who refused to be transformed were secretly transferred from the Masanjia labor camp to another male-only labor camp. The female practitioners were sent to separate rooms where several male inmates were waiting. The guards at the labor camp gave the green light to the male inmates to do whatever they wished. After days of non-stop sexual abuse, some female practitioners died, some developed mental disorders, and some were permanently injured. Yin temporarily lost her memory and experienced mental breakdowns.

Yin survived. When she was in the labor camp, Yin made a promise with fellow practitioners that if one of them could get out alive, she would expose those heinous crimes to the entire world. And that is what she has been doing since 2016 when she came to the United States under asylum.

On April 14, 2016, 15 years after she was thrown into the male prison cells, she testified in Congress at the hearing on “China’s Pervasive Use of Torture.” Her written testimony is available here (pdf).

Falun Gong Practitioners Continue to Reveal the Truth in China

Despite the persecution, Falun Gong practitioners in China continue to clarify the facts to the public. The Epoch Times obtained several documents from Liaoning Province dated 2012 to 2019.

The document states that each year about $18,000 is allocated for purchasing tools and hiring people to remove Falun Gong materials. Teams specialized in surveying the neighborhoods and removing materials were created. For example, in five days, they mobilized about 300 people in a residential area and removed 102 wall slogans, 1,790 posters, 28 CDs, 24 banners, 145 brochures, and 124 booklets, according to the document.

Epoch Times commentator Li Linyi said that despite the 22-year-long ongoing persecution of Falun Gong, these internal documents show that Falun Gong has not been suppressed and that Falun Gong materials can still be found throughout China.

On multiple occasions, the U.S. government has passed resolutions condemning the CCP’s actions and has been calling for an end to the persecution.