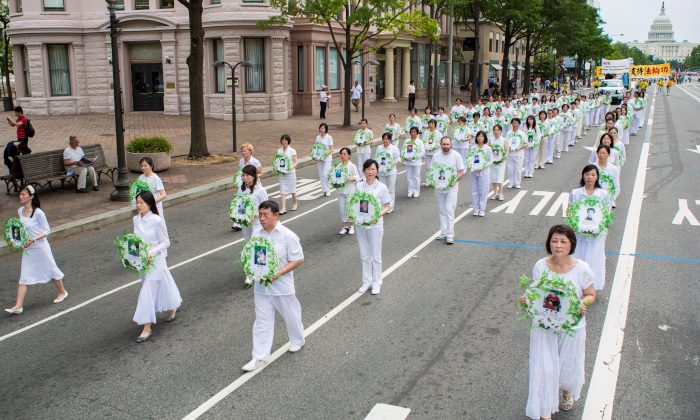 Falun Gong practitioners carry photos of practitioners who have died of torture or abuse in China as a result of the persecution, on July 13, 2012, in Washington, D.C. (Edward Dai/Epoch Times)
China

When Fu Hui heard that the Chinese regime had begun persecuting Falun Gong, she decided that she must appeal to the Beijing authorities. In 2000, shortly after the persecution began on July 20, 1999, Fu was arrested and detained for 12 months.

13 years later, Fu’s ordeal was not yet over. On March 21, 2013, Fu was arrested in Shenyang City, in northeastern China’s Liaoning Province and brought to the Shenyang No. 1 Detention Center, where she was interrogated and tortured by police.

The police repeatedly shocked her with electric batons, then hammered sharp bamboo sticks under her fingernails. When Fu passed out from the pain, the police poured cold water over her body to wake her, then continued torturing her.

From January 1 to June 30 this year, 2,100 other Falun Gong practitioners like Fu were arrested by local police bureaus and 610 offices across the country, according to a recent report by the Falun Gong website Minghui.org. The 610 office is an extralegal Communist Party agency established in 1999 for the purpose of executing the persecution of Falun Gong.

The Falun Dafa Information Center, the press office for Falun Gong, estimates that hundreds of thousands of Falun Gong practitioners are detained within China’s legal and extralegal detention facilities at any one time, making them the single largest group of prisoners of conscience in China.

Since the crackdown began in 1999, Minghui reported a total of 3,697 deaths, though the actual figures may be much higher. Due to heavy information censorship in China, the exact number of torture and death cases cannot be known, spokesperson for the Falun Dafa Information Center, Erping Zhang, said in an email interview.

“The cases documented by the Minghui website are only confirmed cases from sources in China. We often learn about some arrest or death cases months or even years later because of the censorship in China,” Zhang said. Falun Gong practitioners within China, as well as international NGOs and rights groups help provide the data that Minghui reports.

Many more practitioners are believed to have died from forced organ harvesting. In recent years, evidence has emerged of the systematic harvesting and selling of organs from China’s prisoners of conscience, most of them Falun Gong practitioners.

In a 2006 investigation conducted by human rights lawyer David Matas and former Canadian secretary of state (Asia-Pacific) David Kilgour, they confirmed that organs were being harvested from Falun Gong practitioners in China for sale to patients in need of organ transplants, killing the practitioners.

Although the number of organ transplantations performed in China remains a state secret, David Matas told the Epoch Times in a 2012 interview that he estimates 8,000 Falun Gong practitioners are killed each year for their organs. By that calculation, several thousand may have already perished this year from such organ harvesting practices.

Zhang noted that the newly released statistics demonstrate the regime has not eased its persecution of Falun Gong. “The numbers speak for themselves that the persecution against Falun Gong in China remains ruthless, if not worse, averaging at least seven deaths per month, 23 kidnapping cases every two days, and about five persons sentenced every two days via illegal procedures. We need to be mindful that the CCP [Chinese Communist Party] is resorting to all state machinery in an effort to eradicate Falun Gong practitioners over the past 14 years.”