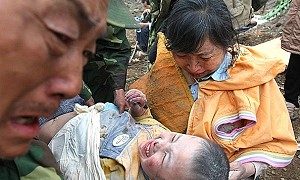 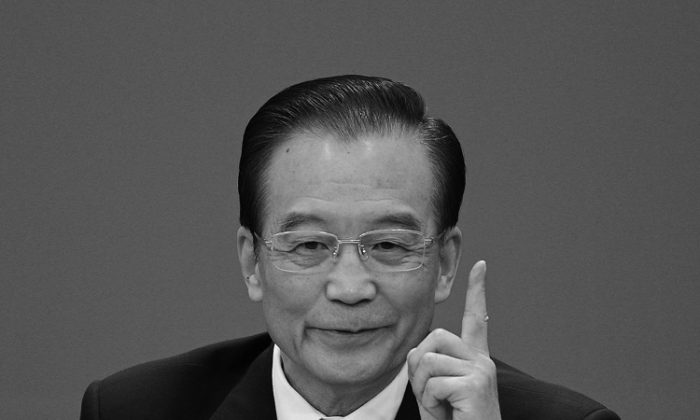 Chinese Premier Wen Jiabao speaks during a news conference following the close of China's National People's Congress (NPC) at The Great Hall Of The People on March 14 in Beijing, China. In his remarks, Wen harshly criticized Bo Xilai, who was arrested the next day. (Feng Li/Getty Images)
Opinion

The Wang Lijun/Bo Xilai scandal has ripped open the curtain of secrecy and silence that generally surrounds Chinese leaders. What makes the present political struggle at Zhongnanhai so intense, complex, and hard to resolve during this extra-sensitive year of power change is the deep involvement by some of the top Chinese leaders in the Falun Gong persecution.

Wang Lijun, former deputy Mayor and chief of police of Chongqing, fled to the U.S. Consulate in Chengdu to seek political asylum on Feb. 6—something unprecedented in recent Chinese history, and a humiliation for Chinese leaders obsessed with saving face. Twenty-four hours later, Wang was escorted to Beijing by senior officials of the Ministry of State Security and hasn’t been heard from since.

Chinese Communist Party (CCP) leaders belonging to different factions have been busy taking actions to secure their power positions. But except for a sense that the power struggle within CCP has intensified and reached a new peak, the exact reasons and motivations for their moves escape the outside world.

What has intensely frustrated and worried Beijing is that the U.S. government exposed one of the pieces of information provided by Wang Lijun, during Xi Jinping’s recent visit to the United States. Xi Jinping is ticketed to become head of the CCP at the 18th Party Congress in October. According to reporting by national security reporter Bill Gertz in the Washington Free Beacon, a U.S. government official indicated that Bo Xilai and Zhou Yongkang have been scheming to disrupt Xi’s assumption of power—polite language for Bo and Zhou deposing Xi and then taking power for themselves.

This has added fuel to the already heated and complex internal power struggle in the CCP’s top circle. The CCP leaders know very well that it’s not easy to keep the U.S. government quiet. It has become a serious matter of concern for the top officials as to what other unsavory secrets of theirs, contained in the bundle of documents handed over by Wang, will be exposed.

Naturally, every member of the Politburo, the 25-member body that oversees Communist Party affairs, has the common goal of maintaining the CCP’s rule. They also know that if they don’t handle the Wang Lijun affair well, it will have serious consequences. Not only could the regime fall, it could even cost them their lives.

What is known about Wang so far is that he has committed crimes as part of his job as chief of police in Chongqing, including the illegal arrest and torture of private business entrepreneurs under the “hitting the black” anti-crime campaign.

Wang was also deeply involved in the persecution of the Falun Gong spiritual group, including live organ harvesting from allegedly thousands of Falun Gong practitioners.

Behind many of Wang’s crimes stands the recently ousted Bo Xilai, who orchestrated the leftist “singing red songs and hitting the black” campaigns. Bo was removed from his post as Communist party chief of Chongqing on March 15, and is said to be under house arrest.

It can be said that the majority of cadres in the CCP’s top circle are not in support of Bo’s campaign, and they might be able to reach an agreement of how to deal with Wang and Bo based on this issue.

However, as to the issue of the Falun Gong persecution, especially the crime of live organ harvesting, the CCP top circle is divided into two groups, with Jiang Zemin, Zhou Yongkang, Li Changchun, Jia Qinglin, and Luo Gan on one side, and Hu Jintao, Wen Jiabao, Xi Jinping, Li Keqiang, and He Guoqiang on the other.

It’s obvious that the persecution of Falun Gong is the core issue that the CCP top circle cannot evade.

Who are the major players engaged in the current infighting among the upper echelon of the Chinese Communist Party?

Because of their active participation in the persecution of Falun Gong, Wang Lijun, Bo Xilai, Zhou Yongkang, Li Changchun, Jia Qinglin, and Luo Gan are bound together in the “Jiang [Zemin] faction.” It was Jiang who ordered the persecution in July 1999.

In order to continue the persecution and avoid being held accountable for their crimes after stepping down, Zhou Yongkang and others in the Jiang faction were hoping to bring the equally guilty Bo Xilai into the nine-member Politburo Standing Committee. Protecting Bo is to protect themselves. That’s why Zhou and Li and others are reluctant to have Bo Xilai punished, and are even making it more difficult to punish Bo.

Hu Jintao, Wen Jiabao, Xi Jinping, Li Keqiang, and He Guoqiang—of the Youth League faction, those who first came to power through their work in the Communist Youth League—have been silent or evasive on the issue of the persecution of Falun Gong. Trying to protect their smooth future rule, they want to take Bo down, but it seems they haven’t reached an agreement in terms of how to punish him.

Hu Jintao just wants to have a smooth transition of power. He doesn’t really want to engage in a life and death struggle with the Jiang faction, and hopes to pass the troubles down to his successor.

Wen Jiabao, according to an insider, is the one with the firmest stand among the ones who want to send Bo to jail. Wen seems to have the conscience to realize that live organ harvesting for profit is not a humane thing to do. Wen thinks they cannot answer to history for having condoned such an atrocity for more than 10 years. Therefore he hopes to solve this issue, starting with holding Bo accountable.

“Crown prince” Xi Jinping, after learning about Bo Xilai and Zhou Yongkang’s coup d’état scheme against him through the U.S. government, must know that in order to have a smooth rule in the future, he must get rid of Bo.

Every member in the CCP’s top circle has his own agenda and uses all kinds of ways to scheme against others. This makes the power struggle triggered by the Wang Lijun affair so complex and dramatic.

What will be the outcome of this heated infighting? It depends on several factors, such as whether Hu and Wen can be resolute enough, whether the Jiang faction will compromise, the attitude of a few CCP seniors in the top circle, how fast the U.S. government will publicize the documents provided by Wang Lijun, etc.

The punishment of Bo Xilai will be an important indicator of the outcome of the CCP’s power struggle. But as the Chinese saying goes: “the one who wins the hearts of people wins the country; the one who loses the hearts of the people loses the country.” Either way it goes, there don’t seem to be any winners. Regardless of how the CCP’s internal power struggle turns out, it doesn’t change the CCP’s ultimate destiny of disintegration.