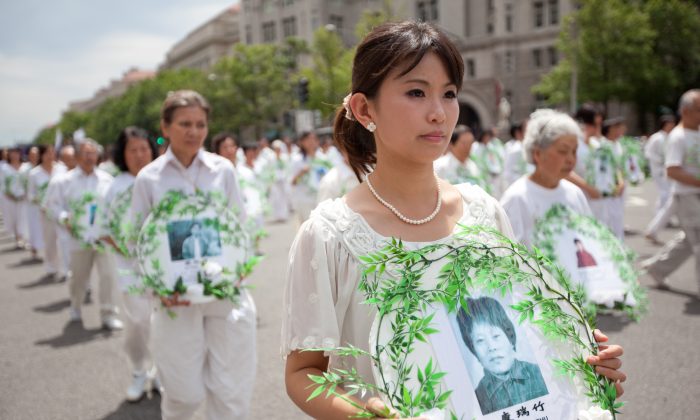 Marching Falun Gong practitioners hold photos of victims of the persecution during a parade in Washington, D.C., on July 18, 2011. (Epoch Times)
Chinese Regime in Crisis

The Chinese Communist Party is fighting a war with itself that it can’t acknowledge and doesn’t know how to end.

The latest news from Beijing is that Party heavyweight Zeng Qinghong was arrested, according to a source high up in the CCP.

The arrest of someone like Zeng was formerly unthinkable. He knows where too many bodies are buried, and is too rich, too powerful, and too well-connected.

Zeng was a member of the Politburo Standing Committee when it was the most powerful body in China. He also headed up the Chinese regime’s intelligence services, ran Hong Kong and Macau for the CCP, and was a godfather-like figure in China’s state-run, monopoly oil industry.

But Zeng is only the latest former top regime figure to be taken down by Party leader Xi Jinping. The former domestic security czar, the former No. 2 man in China’s military, former heads of the petroleum industry, and the head of the Party organ for persecuting Falun Gong have all been arrested.

Since Xi became general secretary in November 2013, well over 400 CCP officials have been purged, with some officials dying during interrogation and others committing suicide as the official net closed around them.

The world’s press has largely covered this institutional bloodletting under the rubric of “anti-corruption.”

While it is true that corruption has been the pretext for charging officials, corruption is not the reason for the CCP’s civil war. The seeds for it were planted on July 20, 1999, when then-Party leader Jiang Zemin launched a campaign to eradicate the Falun Gong spiritual practice.

According to official Chinese regime sources, there were at least 70 million Falun Gong (also known as Falun Dafa) practitioners in 1999, while practitioners say the actual number was over 100 million, or 1 in 12 Chinese.

In a letter circulated to Politburo members on the night of April 25, 1999, Jiang warned that Falun Gong was national in scope with practitioners in all parts of society, including Party cadres, members of the military and security apparatus, and intellectuals, as well as workers and peasants.

He also feared the attractive power of the beliefs of Falun Gong. Jiang wrote, “We must stick to the education of officials and the people with a correct outlook on the world, life, and values. Can the Marxism, Materialism and Atheism that our Communist Party members uphold not win the battle with what Falun Gong promotes?”

Jiang’s views were not widely shared. According to sources with access to top CCP officials, only Jiang among the seven-member Politburo Standing Committee voted to begin the persecution. Jiang nonetheless “unified” their opinions and proceeded over their objections.

The full weight of the totalitarian state came crashing down on the practitioners. Propaganda slandering Falun Gong filled the media. Workplaces, schools, apartment blocks, and villages were enlisted to inform on and pressure practitioners. Mass detentions began. With detention came brainwashing and torture.

According to the press office for Falun Gong, the Falun Dafa Information Center, at any one time hundreds of thousands of practitioners are detained. To date, the Information Center has confirmed 3,769 deaths from torture and abuse, but, given the difficulty of getting information out of China, the true number is believed to be far higher.

In addition, tens of thousands of practitioners are believed to have had their organs harvested for use in transplantation, killing them.

There are no estimates for how many practitioners have been left injured or disabled from torture or how many families have been shattered or individuals made homeless.

Jiang Zemin thought the campaign against Falun Gong would end in six months. In evaluating Falun Dafa, Jiang had been out of his depth. His “materialism and atheism” left him unprepared to understand how individuals might be willing to risk everything to hold true to their most precious beliefs.

He also had not understood how persistent and effective Falun Gong practitioners would be in changing hearts and minds in China. At the beginning of the persecution, Jiang sought to use the state-run media to turn the Chinese nation against Falun Gong. The practitioners risked their lives to tell people what Falun Gong is and how severe the persecution has been. Many people have started to understand, and many have renounced their association with the CCP.

In 2002 Jiang’s term as the head of the CCP came to an end, with the persecution in full swing. Jiang faced a dilemma. If he left power and his successor ended the persecution, then Jiang might be held accountable for the massive crimes committed against Falun Dafa practitioners. But formally keeping power was not an option.

Jiang sought to hold power through cronies who shared with him guilt for the persecution. His people headed the domestic security apparatus. He stacked the Politburo Standing Committee with individuals loyal to him and changed the rule for the committee so that it operated by consensus, stripping power from the general secretary.

He also filled the Central Military Commission with his people, assuring he would have control of China’s military long after this retirement. In addition, Jiang’s people controlled all of the major sectors of China’s economy. They held key positions at every point in the CCP.

These measures gave Jiang an extraordinary amount of influence throughout the 10-year term of his successor, Hu Jintao. The ending of Hu’s term, though, was a crisis for Jiang. His faction had not been able to maneuver anyone into position where they could be promoted as the next general secretary, and his cronies were retiring from top positions in 2012.

Without someone in the top slot, the dilemma faced by Jiang in 2002 returned in an even stronger form. There had been 10 more years of persecution, and Jiang and his faction would be at the mercy of officials who might have no connection to the persecution and might move to end it. If the CCP officially ended the persecution, the cries for holding accountable those responsible would resound from every part of China.

Top members of Jiang’s faction formed a plan. They would appear to accept the installation of Xi Jinping as general secretary, but then quickly move to unseat him.

In March 2012, Wang Lijun, the right-hand man of the conspirator Bo Xilai, fled for his life to the U.S. Consulate in Chengdu. The United States turned Wang over to Hu Jintao’s people, and, according to sources with knowledge of the situation, Wang blew the whistle on the planned coup.

When Xi Jinping took power, he immediately launched an “anti-corruption” campaign. Under the guise of rooting out corruption, Xi began rooting out the Jiang faction.

Xi knew that if he didn’t take action against those who had plotted against him, he would have no power in the CCP. Moreover, according to sources inside the Party, members of Jiang’s faction were now looking for an opportunity to kill him. They can’t risk that Xi might end the persecution.

While Xi has so far carried all before him, taking down one high-ranking Jiang loyalist after another, sources inside the Party say that he has not gained security or stability.

There is no faction loyal to Xi as there was to Jiang, and the CCP members as a whole are not enthusiastic about Xi disturbing the networks of corruption they profit from. Sources in the Party say the body of the CCP remains cold toward Xi’s efforts.

Meanwhile, counting the family members, friends, and close associates of Falun Gong practitioners, hundreds of millions of Chinese have been damaged by the persecution. Their voices will only grow louder as society as a whole turns against it. In turning against the persecution, society will also turn against the entrenched power of the CCP.

Xi Jinping will soon face a choice. He can reveal the extent of the persecution and demand that Jiang and his faction be held accountable. If he does so, he will unleash forces in Chinese society and in the Party that will spell the end of the CCP, as not only Falun Gong practitioners but also all those who have suffered at the hands of the Party will demand justice. But Xi would at least have the chance of leading those in China who want to stand for justice.

Or, Xi can continue his present course and find himself in the dangerous position of never securing a base in the Party, even as he removes one rival after another.