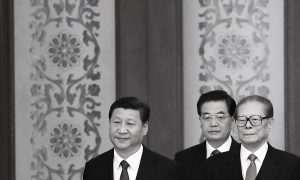 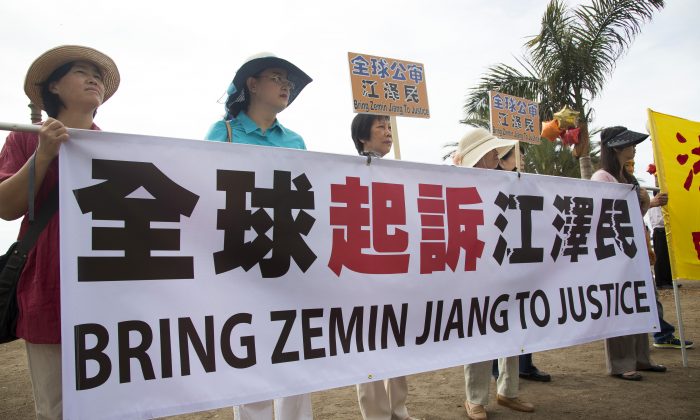 SANTA MONICA, Calif.—At a rally on Saturday English-speaking residents in the Los Angeles area were introduced to an eye-opening new trend in the Chinese community.

As of Sept. 9, more than 170,000 people inside China and around the world have filed lawsuits against the former leader of China with China’s highest court and the Supreme People’s Procuratorate, China’s state prosecutor. They have accused former General Secretary of the Chinese Communist Party (CCP) Jiang Zemin of a host of crimes associated with the brutal persecution of the mediation practice Falun Gong, also called Falun Dafa.

At the rally, Barry Simon, vice president of Resource Development at the Southern California Division of the United Nations Association, said the number of people suing such a high-ranking Chinese official is surprising.

“To hear these kinds of numbers of people being so impacted, it just brings tears to my eyes,” he said.

In July of 1999, Jiang  launched a nationwide persecution of Falun Gong in China over the objections of other CCP leaders. Falun Gong practitioners were arrested, tortured, placed in labor camps and brainwashing centers, and forced to sign statements renouncing their faith. According to the Falun Gong website Minghui, which serves as a clearinghouse for first-person reports by practitioners on the persecution, more than 3,800 practitioners have been confirmed tortured to death;  the actual number is believed to be much higher.

The persecution also led to a horrific system of forced organ harvesting, in which Falun Gong practitioners in prison were matched up with desperate Chinese and international citizens who needed organ transplants and were willing to pay. The prisoners of conscience were then killed on demand.

Simon said he is planning to join Falun Gong practitioners in suing Jiang Zemin, and compared the act to Jews suing Hitler.

“Personally, I believe in eliminating atrocities of this kind all over the world,” said Simon. “The persecution of Falun Gong and other minority faiths is something that’s not appropriate in 2015.”

Simon also called for more support for U.S. House Resolution 343, a bipartisan bill introduced in June of this year, which calls on the Chinese Communist Party to immediately end the 16-year persecution of Falun Gong practitioners. It also calls for the cessation of China’s state system of harvesting organs from Falun Gong practitioners and other prisoners of conscience, while demanding transparency and independent investigations into the Chinese organ transplant system.

“For the first time, the United States Congress would go on record as being against this activity, against the persecution of Falun Gong members, against the harvesting of organs,” said Simon.

For the first time, the United States Congress would go on record as being against this activity, against the persecution of Falun Gong members, against the harvesting of organs.
— Barry Simon, VP of Resource Development, United Nations Association

Dr. Dana Churchill, a representative of the group Doctors Against Organ Harvesting (DAFOH) who spoke at the rally, said researchers estimate 60,000 Falun Gong practitioners have been murdered for their organs. Tibetans, Uyghurs, and Christians have also been killed.

Audience members at the rally signed a petition to encourage legislators to support House Resolution 343.

“The people who instigate this type of crime anywhere in the world, and especially this case in China, should be held accountable,” said Simon. “It’s time.”

Ann Lau, president of the Visual Artists Guild, said the guild has in the past worked to raise awareness of the issue of organ harvesting with the United Nations Association, but China has blocked their efforts. She also expressed support at the rally for bringing Jiang to justice.

The president of the Tibetan Association of Southern California, Dolkar Gakyil Yangchen, said she came to the rally to show her support to Falun Gong practitioners, whom she called “brothers and sisters.”

“Just like them, Tibetans are also being persecuted, and under the Communist government, they are suffering every single day,” she said.

A total of 143 Tibetans have committed self-immolation in protest of oppression by the Chinese authorities, said Yangchen. She said it is known that organ harvesting is also happening in Tibetan prisons, and said it’s nearly unfathomable that the surgeries to remove the organs are often done without anesthesia.

Yangchen said she would encourage Tibetans to join Falun Gong practitioners and also sue Jiang Zemin and the Communist regime.

Earlier this year, China’s Supreme People’s Court implemented changes to protect citizens’ legal rights to submit written complaints, which cannot be automatically rejected as they were in the past. An immense wave of complaints followed.