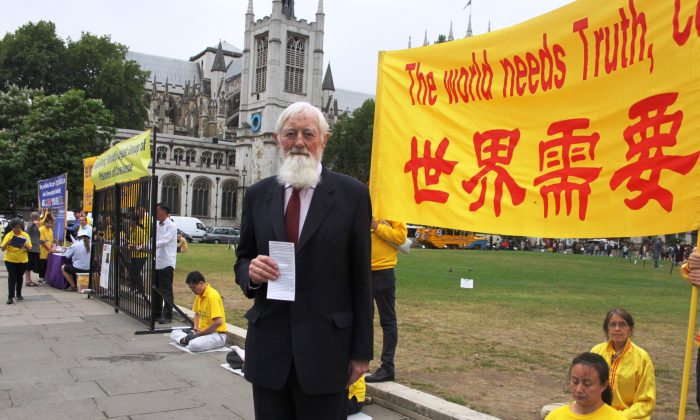 Persecuted for Sixteen Years, Meditators in London Call for Justice

“I want justice, and justice doesn’t seem to be prevailing at the moment,” said David Amess, Member of Parliament (MP) for Southend West, speaking of the unrelenting suppression of Falun Gong practitioners in China.

He joined a peaceful protest outside Parliament Square on July 15, where practitioners of Falun Gong, a spiritual discipline that originated in China, called for an end to the 16-year-long persecution of their practice instigated by the Chinese communist regime.

“I just want to make sure that people are treated decently and that due judicial process is followed,” Amess added.

The support of MPs like Amess is greatly welcomed by practitioners, who have been campaigning for the end to the state-run persecution that has seen hundreds of thousands of practitioners arrested and sentenced to labour camps without trial, according to Amnesty International and the New York-based Falun Dafa Information Centre (FDIC).

Today, Falun Gong practitioners form the largest group of prisoners of conscience in the world, says the FDIC. In the camps they face both mental and physical torture, with over 3,000 practitioners known to have died as a result.

This is just the tip of the iceberg according to international investigators who have studied the persecution and one of its spin offs: the forced harvesting and sale of organs for transplant operations from prisoners of conscience.

That is something that MP for Cambridge Daniel Zeichner described as “deeply troubling” at the July 15 protest.

Clare Moody, Member of the European Parliament, also expressed her concern about the reports of organ harvesting from practitioners of Falun Gong in a statement supporting the protest.

“We continue to press the British Government on this issue … We want to remind China that the World Health Organisation Guiding Principles on Human Organ Transplantation require transparency, accountability, and traceability,” read a portion of her statement.

In an independent report in 2006, David Kilgour, a former Canadian secretary of state, and David Matas, an international human rights lawyer, found evidence of organ harvesting from tens of thousands of living prisoners of conscience. They found Falun Gong practitioners were particularly targeted.

At the protest, many passers-by signed a petition organised by Doctors Against Forced Organ Harvesting aimed at stopping the illegal organ harvesting in China. They signed in front of a bright yellow banner that displayed the principles of Falun Gong: “Truth Compassion Tolerance”.

While some practitioners, both Chinese and Western, performed the slow-moving exercises of Falun Gong, a little further along the pavement others re-enacted a torture scene.

Lord Hylton, Independent Member of The House of Lords who came to support the event, said he had been concerned about the human rights situation in China for a long time.

“You are rightly demanding that those responsible for terrible abuses should be prosecuted and brought to justice,” he said, in reference to the protesters holding a banner that read: “Bring Former Chinese Dictator Jiang Zemin to Justice for Crimes Against Humanity”.

According to Minghui.org, a first-hand information source for Falun Gong, more than 60,000 Falun Gong practitioners and their family members have filed criminal complaints against Jiang between the end of May and July 9, 2015.

Jiang is known for initiating the violent persecution against Falun Gong on July 20, 1999. Before that, Falun Gong was practised freely in China by an estimated 70 million citizens.

Other MPs sent words to their constituents supporting the protest.

“The reported persecution of practitioners of Falun Gong in China is extremely troubling and I hope that amends can be made soon,” wrote Michael Ellis, MP for Northampton North.

Ian Murray, MP for Edinburgh South, wrote: “We should stand together and confront persecution wherever we find it.”

Ultimately, Falun Gong practitioners are asking for their fundamental human right: the freedom to believe.

Salil Tripathi, the director of policy at the Institute for Human Rights and Business, emphasised in a statement that a growing economy in a country does not necessarily denote a “fully developed” society.

“Both China and India are emerging powers; both need to learn that with power come human rights obligations,” he said. “A society is fully developed not when its gross domestic product rises, but when its people can think without fear, speak without fear, act without fear, and pray – if they wish – without fear.

“A government that fears those freedoms is fundamentally insecure, and even if it jails its own people, we should remember that the victory is the people’s.”

There will be additional events on Saturday, July 18, in London to raise awareness about the human rights violations against Falun Gong in China.

With additional reporting from Susan Chan and Molly Mosun.