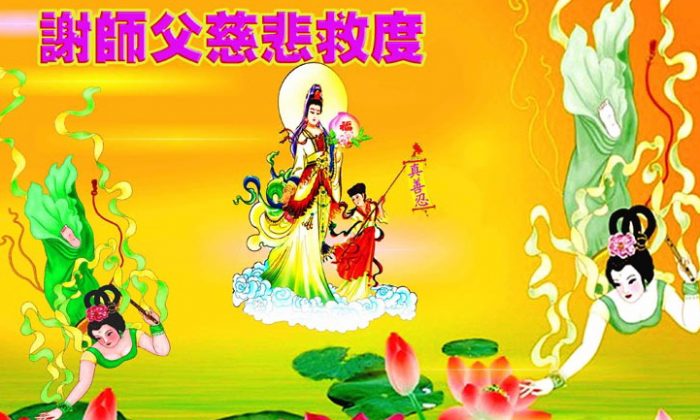 A greeting presented by Falun Gong practitioners at the Jiamusi 224 Hospital, in the far northeast of China, show a full moon shining upon cherry blossoms over an ocean, with greetings to the founder of the Falun Gong practice. (Minghui.org)
China

When the former leader of the Chinese Communist Party, Jiang Zemin, began his brutal crackdown on the Falun Gong spiritual practice in 1999, he started with the Party cadres—especially those in the military and security services.

“Jiang … accepts the threat of Falun Gong as an ideological one: spiritual beliefs against militant atheism and historical materialism,” wrote one scholar, Julie Ching, at the time. “He wishes to purge the government and the military of such beliefs.”

Now, first among a flood of greetings sent to the founder of the Falun Gong practice, Li Hongzhi, on the occasion of the Mid-Autumn Festival in China, are those hailing from the very state organs that Jiang had attacked with such vigor 13 years ago.

The Mid-Autumn Festival, which fell on Sept. 30 this year, is a significant traditional Chinese holiday where families reunite, often gifting each other the iconic Chinese treat of moon cakes. Falun Gong practitioners also take the opportunity of such holidays to post messages, on intricately adorned electronic cards, to their spiritual teacher.

“Falun Dafa practitioners from the judicial system wish Compassionate Great Master a Happy Mid-Autumn Festival. All the disciples dearly miss you!” says one note, accompanied by a radiant, golden-colored and sparkling boat, riding the ocean under a rainbow. The pictures were sent to the Falun Gong website Minghui.org, which posted them in multiple articles.

“Falun Dafa practitioners serving in the military industry wish Master a Happy Mid-Autumn Festival. Thank you Master, for your compassionate salvation,” says another message, which featured a Bodhisattva (in Buddhist tradition a female goddess) riding a celestial cloud, while a divine assistant holds a bright scroll imprinted with the Chinese characters of the principles of Falun Gong’s teachings: truthfulness, compassion, tolerance. The mention of “compassionate salvation” in the message refers to what Falun Gong practitioners believe is the power of its teachings to effect inner transformation and purity in those who adopt them.

Greetings regularly feature natural objects and scenes: a moon lighting up branches of cherry blossoms, bright pink and red flowers, sweeping landscapes of mountains and rivers, lotus flowers blooming in a pond, pagodas, and a glorious sunrise. They express hope for an end to the persecution in China, and gratitude to the founder of the practice for his fortitude in the face of the Communist Party’s campaign.

Levi Browde, executive director of the New York-based Falun Dafa Information Center, said that the greetings show the nature of the practice. “Falun Gong is something that people feel endeared to. It’s something that is very close to people’s hearts, and the fact that they would take the time to express the types of feelings shows clearly how, at its heart and soul, Falun Gong is highly personal, and something that touches one’s heart in a profound way.”

“People often have the misunderstanding that Falun Gong is a social movement,” Browde said. “It’s not.”

The greetings also exemplify the fact that Falun Gong practitioners are to be found in every corner of Chinese society, despite a 13-yearlong persecution that has sought to “defame their reputations, bankrupt them financially, and destroy them physically,” as it was put in an infamous internal Communist Party order that was passed down soon after the campaign began.

Apart from those in the judicial and military systems, greetings came from small and medium enterprise owners, employees of state banks, farmers, statisticians, financial sector workers, bureaucrats, real estate agents, employees in the railway, forestry, insurance, tax, electricity, and environmental sectors, among many others that were listed.

“You have a wide spectrum of Chinese society, geographically, socially, [and] economically, that are giving voice to the fact that not only do they practice Falun Gong, but feel strongly and positively about the practice,” Browde said. “That exposes as a lie the Communist Party’s claim that Falun Gong is a marginalized group that has been crushed. It’s really quite the opposite.”