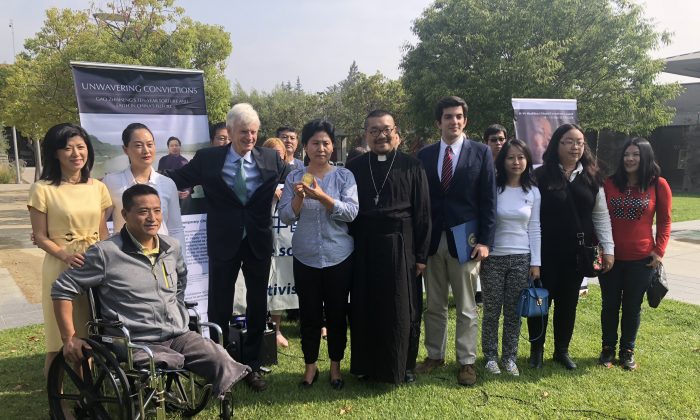 David Kilgour, a goodwill ambassador and a board member of the First Step Forum, presented the award to Gao’s wife, Geng He, on Aug. 24. Kilgour is a former Canadian member of parliament and served as Canadian Secretary of State, Asia-Pacific.

Gao reportedly was “disappeared” by Chinese authorities on Aug. 13, 2017, over a year before the award day.

The award was named after Clement Shahbaz Bhatti, Pakistan’s first federal minister of minorities affairs, who was assassinated on March 2, 2011. Among the previous winners of this award were Pope Francis and Egyptian Dr. Hany Hanna.

“Lawyer Gao is internationally respected enormously,” Kilgour said  at the event. “He was first targeted by the Party and the state in China in 2005 for standing up for various oppressed communities in China, including Christians, coal miners, and Falun Gong.”

Gao has been repeatedly detained, arrested, jailed, placed under house arrest, and reportedly “disappeared” by the Chinese communist regime since 2006.

International human rights groups and media have reported that Gao has suffered brutal torture at the hands of the Chinese regime’s security officials.

Kilgour said this included “three years in solitary confinement with no lights in a room.”

“Can you imagine what it would be like without lights?” Kilgour said. “He [Gao] writes that he was sustained by his faith and hopes for a different China.”

Gao lost most of his teeth at the age of 53 and reportedly suffers from other medical conditions as a result of years of physical and psychological abuse.

Geng gave an acceptance speech for her husband. She said that Gao prayed a lot, but 99 percent of his prayers were for the people who were persecuted in China, and for changes to take place in China.

In 2001, Gao was recognized by China’s Ministry of Justice as one of the 10 best lawyers in the country for his work defending victims of medical malpractice and dispossessed landowners.

However, in 2005, after Gao sent an open letter to Beijing’s leadership exposing the torture and inhuman treatment inflicted by the regime on practitioners of the spiritual practice Falun Gong, Gao and his family were put under 24-hour police surveillance.

In November 2005, after Gao sent out his second open letter about Falun Gong legal cases, Gao’s law firm operations were suspended. Gao was arrested in September 2006 and was sentenced to three years in prison on Sept. 22, 2006.

After he was released from jail, Gao continued his work on China’s religious freedom and human rights. He published the books “Unwavering Convictions” and “2016 Human Rights Report for China,” and a draft constitution for a future China.

In January 2009, Gao’s wife and two children escaped China with the help of underground faith groups. Since they left China, they have had a difficult time reaching Gao and their own families in China.

His family hasn’t been in touch with Gao since Aug. 13, 2017, and his whereabouts is unknown.

“Why has Gao today been missing for more than a year? Why is he disappeared? Why are none of his family members in China able or willing to answer their phones when Geng He calls them from America?” Kilgour asked in his speech. “Why were the identification papers for all of Gao’s family in Xinjiang taken away?”

“Gao is China’s Mahatma Gandhi and Nelson Mandela,” Kilgour said in an interview after the award event.

Gao has been nominated twice for the Nobel Peace Prize.