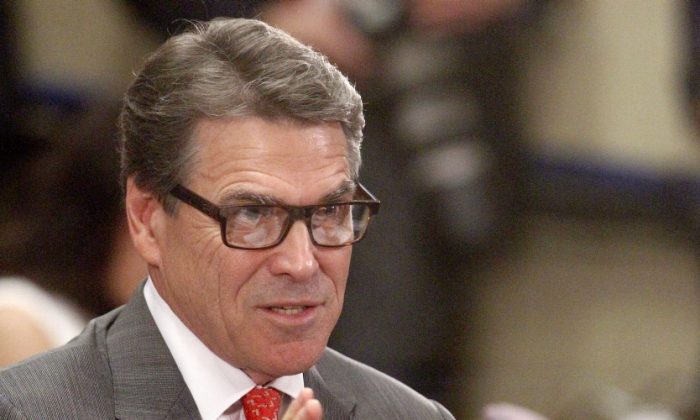 President Obama does not care about border security, according to Texas Gov. Rick Perry in an interview on ABC News July 6
By Epoch Times Staff

He said he has been asking the federal government to address problems on the border for years, with no response.

“In 2010 I asked for the president to put a thousand National Guard troops in place along the border to secure the border so that we could train up 3,000 border patrol agents to augment and to permanently secure that border.”

There are nowhere near enough resources along the border. Texas has only seven agents per mile. Other states have more, according to Perry.

He said the federal government is ignoring the law. “The rule of law is that the Constitution requires the United States to secure the border, and we’re not doing that.”

“We haven’t done it for years. And we are paying a huge price. When you have catch and release policies that send a message to people.”

Perry blames the president for encouraging migration, “By his policies, by nuances that it is okay to come to the United States and you can come across and you’ll be accepted in open arms.”

On Fox News, Perry said, “You either have an incredibly inept administration, or they’re in on this somehow. I mean I hate to be conspiratorial, but I mean how do you move that many people from Central America across Mexico and then into the United States without there being a fairly coordinated effort?

Perry would not address the idea of amending a 2008 law that protects children who might be victims of trafficking from being deported. It is one of the reasons juvenile migrants are not sent back when found. Perry said, “What has to be addressed is the security of the border. You know that. I know that. The president of the United States knows that.”

“It is clear that additional funding will be needed to ensure the proper care of these unaccompanied children, to enforce the law, and to further secure our border so that these problems can be mitigated in the short term.” — Hal Rogers, chairman, House Appropriations Committee

“The president’s own executive orders have led directly to the humanitarian crisis along the Southern border, giving false hope to children and their families that if they enter the country illegally they will be allowed to stay.” —  John Boehner, House speaker

“As our country faces an unprecedented surge in the arrival of unaccompanied alien children (UACs) at our southwestern border, we call on you to immediately end the failed policies that encourage young individuals to put themselves in peril, leave their home countries, and make a long and dangerous journey to enter our country illegally.” — Darrell Issa, congressman, California