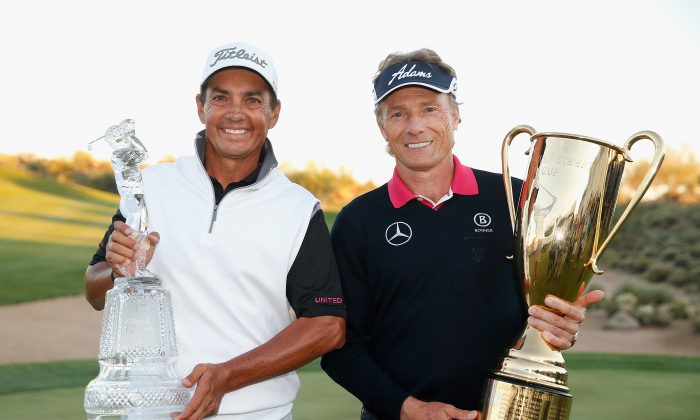 Scottsdale, Ariz.—Tom Pernice Jr. was a bit disappointed earlier this week when his hometown baseball team—the Kansas City Royals—came up narrowly short in losing to the San Francisco Giants. However, that earlier disappointment was put in his rearview mirror when the 55-year-old native of Kansas City outplayed Jay Haas over a four-hole sudden death playoff to capture the final event of the Champions Tour—the Charles Schwab Cup Championship.

Pernice stayed near the lead throughout the final round and ended the round with a 3-under-par 67 and a final 269 aggregate total. In the four-hole-playoff Pernice equaled birdies with Haas on the first playoff hole—the 18th hole—and matched pars on the next two holes, the 17th and 18th, before overcoming Haas with a birdie 4 when playing the 18th again for the final time.

The win is the fourth for Pernice in his career on the Champions Tour and the biggest to date. For Haas the defeat seemed unlikely as he jumped to the 36-hole lead—courtesy of a tournament-low 8-under-par 62 during Friday’s round. From all indicators it appeared Haas was in total command.

During Saturday’s third round Haas struck a spectator with a golf shot on the par-5 eighth and with his nerves being a bit tentative—failed to match par with a lackluster 5-over-par 75 dropping him from the lead. On Sunday’s final round, the consistency returned for the Wake Forest alum with a solid 4-under-par 66 only to be undone during the subsequent playoff with Pernice.

For many of the competitors the main storyline was the demanding nature of the firm putting surfaces encountered on the Cochise Course. In years past the greens have shown a receptive nature and low scores were often the rule. Not this week.

Two of the par-5 holes on the Cochise were reduced to lengthy par-4s and with pins tucked close to the edges the need for absolute soundness in ball striking was paramount.

Players also had to exhibit superlative ball control skills in handling vexing swirling winds, which also played a factor in the middle of the event. Shots not struck with utter precision were thwarted time and time again.

The other major storyline for the Schwab event was already determined prior to the first tee shot being hit as Bernhard Langer claimed an insurmountable 845-point pre-event lead to become the second player since Hale Irwin in 2002 to clinch the season-long Charles Schwab Cup before the season-ending event teed off.

Langer claimed the $1 million annuity for his stellar five wins among them being two majors earned during the season. The German got off to a fine start for the event with a 4-under-par 66 but only could match par-70 for the second and third rounds. In the final 18 holes, Langer played boldly and benefited from a putter that holed a range of putts with a closing 5-under-par 65 earning him a tie for fourth with Scotland’s Colin Montgomerie.

Credit Pernice in his dogged pursuit of Haas. After bogeying the par-4 14th, the Missourian birdied three of the final four holes to secure a playoff spot. For Haas the ending result was a clear disappointment—looking for a win on a course where he had finished second on three different past occasions. There were others in the hunt through the week. Kenny Perry played consistently through the week, earning a solo third place finish and missing the playoff by one stroke.

The Champions Tour now heads into hibernation with the new season to start in early 2015. The player-of-the-year will invariably go to Langer for a brilliant run of events throughout the campaign. His 13-stroke triumph in the Senior British Open at Royal Porthcawl was vintage stuff and the season’s ultimate highlight. Can Langer continue his peak form for the year ahead? That will be among the questions that need resolution but if anything this run has shown the German is far from heading into a sleepy retirement from competition.