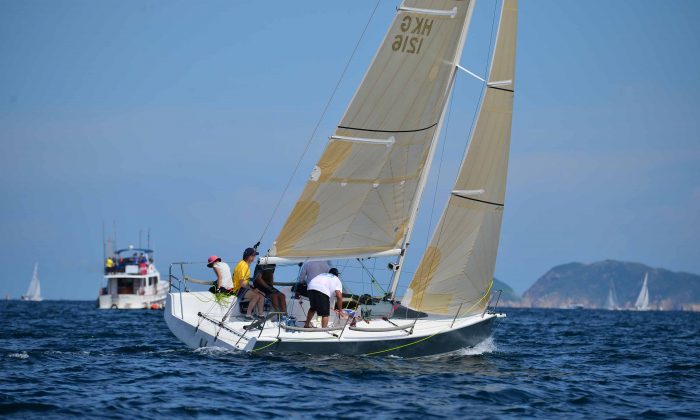 HONG KONG—Day-2 of the Hebe Haven Helly Hansen Summer Saturday Series 2014 took place on June 28 in glorious sunny weather accompanied by a steady 7-knt breeze, adequate to give the yachts a good turn of speed. There was a slight lull in conditions late in the afternoon during the second race of the day (Race-4 of the Series) but the wind soon picked up again – champagne sailing indeed.

Inge Stromf-Jepsen skipper of Helly Hansen sponsored Jive expressed her appreciation to the title sponsors after the race.

“We think it’s great that Helly Hansen is sponsoring the event. Today, there must have been nearly forty boats out there and it was sunny, clear skies, if we had a little more wind we would have been really happy,” Stromf-Jepsen told the Epoch Times.

Vice Commodore CK Chan set a windward/leeward sausage course and got the races off on target time: IRC and Sports Boats started at 2.30pm, HKPN followed at 2.35pm and Dragons started 5-minutes later.

IRC
In the IRC Category “Stella”, a Sydney 38, soon established and impressive lead in the first race (Race-3) and went on to take Line Honours, “Talkinghead[/i] also performed well finishing less than a minute later to take first place on corrected time. Impala “Taxi” although a few minutes behind the first two was placed 2nd on corrected time pushing Stella into 3rd place.

In the second race (Race-4) “Stella” and “Talkinghead” were again 1st and 2nd over the line, but it was Impala’s to the fore with “Taxi” taking 1st place and “Moll” 2nd. “Stella” was again placed 3rd on corrected time with “Talkinghead” 4th.

Sports Boats
In the Sports Boat category, Jim Daly and crew in his GP26 “Stingray” had a great run in Race-3 heading the field for his first Line Honours.

Discussing the race with Epoch Times before prize-giving, Daly, giving away a little on handicap to the rest of the Sports Boats (all Magic 25’s) was very pleased with their performance and was anticipating a possible first place finish in addition to the Line Honours.

“That was a beautiful day, the water was fantastic, everything went very well and I think we won the race. We certainly got Line Honours in the first race, which is great. I don’t think we did too well in the second race, but we did get a win so we are happy with that,” he explained.

“We didn’t make so many mistakes [today] everything seemed to work very well; we worked very well as a team. The things we wanted to do worked out very well. I had my wife back on board and she is really good, and of course Steve of North Sails, Glen and Mike, so we had a good team and the team worked well together.

“The weather was good the wind was nice,” he added.

“Good Vibrations”, another Sports Boat that is not so often on the winner’s podium sailed superbly to pull off a 1st place in Race-4. “Merlin” and “FreeFire It’s My Pleasure” swapped 2nd and 3rd places in the two races to stay well in touch in the series.

HKPN
In Races-3 and -4 “Kiasu” was the fastest of the HKPN boats taking double Line Honours. On corrected time, “Tara” took 1st place “Windseeker” was 2nd and “X-Terminator” was 3 rd in Race-3.
In Race-4 [i]Ichiban” took 1st place, “Tara” came in 2nd, “Bucephalus” was 3rd and “Windseeker” 4th.

Dragons
In the Dragon Class “Zephyr” won the first race with “Celine”, “Eaux Vives” 2nd and 3rd respectively. In the second race “Zephyr” went on to complete her double win ahead of “Eaux Vives” and “Wyuna”.