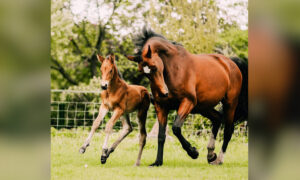 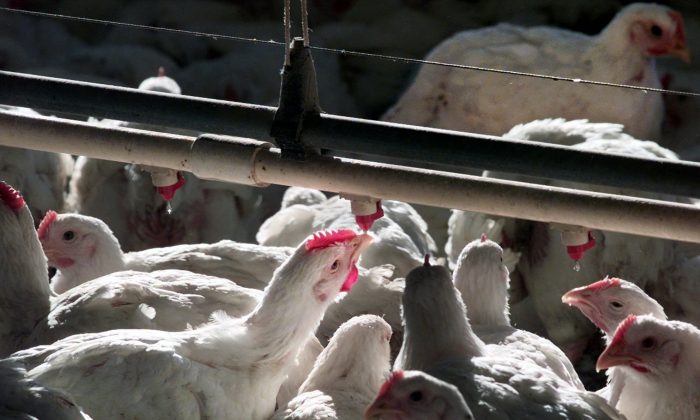 87 percent of chicken carcasses test positive for E. coli before they are sent to stores. (AP Photo/J.Scott Applewhite)
Animals

In a substantial move for one of the country’s largest chicken producers, Perdue will change its chicken slaughtering method.

While animal welfare advocates criticize many aspects of industrial chicken farming, the slaughter method has been a major bone of contention.

In most slaughterhouses around the country, the process is similar.

First, the chickens are hung by their feet to a metal rail.

The rail then drags the chickens through electrified water, stunning them. That renders them insensitive to pain, according to the National Chicken Council, but may leave them conscious, according to the Humane Society of the United States.

The chickens are then dragged to a machine that slits their throats. Some miss the blades and instead drown in tanks of scalding water, according to the Humane Society.

CAS means the chickens have oxygen gradually replaced with carbon dioxide—after or even during transport to the slaughterhouse. Because the change is gradual, the chickens lose consciousness, but don’t choke.

This method eliminates the need for electric shocks and the stress of hanging upside down. It also makes the process easier on the workers who hang the birds on the rail to slaughter.

The method is already used in slaughtering turkeys, according to Tracy Remain, executive vice president of PETA.

Almost 9 billion chickens were produced for meat last year in the United States, according to the National Chicken Council (NCC), a trade association. Perdue slaughtered over 650 million of them, according to WATT, a media focused on the animal industry.

But Perdue, the fourth largest chicken producer in the country, is the first major player to pursue CAS for killing chickens, the company says. Remain confirmed this assertion.

Perdue promised to convert one of its facilities by the end of 2017, “followed by gradual implementation” at all other facilities.

The move may have been influenced by media attention to farm animal welfare. When news about inhumane animal practices appears in the media, demand for poultry drops for more than three months afterwards, a 2010 Kansas State University study found.

Remain commended Perdue on the effort, but said PETA still advocates for all people going vegan.

“No matter what they do, they can’t eliminate all cruelty,” she said over the phone.

For example, the industry standard gives each chicken eight tenths of a square foot living space. That may be a playground for a tiny chick, but, as NCC notes, the birds “grow into this space.” Advocacy organizations deem the space insufficient.

They also criticize that the chicken sheds are windowless, poorly ventilated, and the animals live in their feces.

The industry contends the sheds are ventilated enough, some let the daylight in, and the ground is covered in dry litter.

The advocates also criticize the chicken are grown too big too fast.

That makes the birds prone to limping or even unable to stand, have difficulty breathing, and suffer heart attacks, advocates say.

The industry reported a mortality rate of 4.8 percent last year, meaning over 400 million chickens died without reaching the market.

Lastly, multiple undercover investigations, including at contract chicken farms for Perdue, revealed abuse of the animals by their handlers.