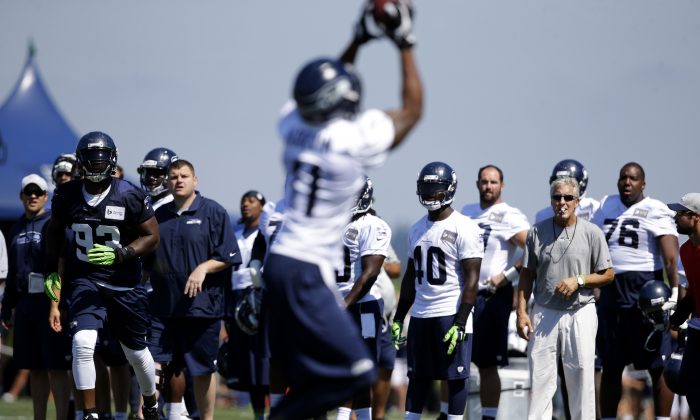 Percy Harvin appeared to get hurt during training camp on Tuesday, but has also appeared to have recovered.

The wide receiver limped off the field, moving slowly after an ankle injury, reported Mike Sando of ESPN.

Trainers worked on him on the field before he went to the locker room.

However, Sando later said that Harvin walked out of the locker room about 20 minutes later and jogged back onto the practice field.

Seahawks coach Pete Caroll told Liz Mathews of ESPN Seattle that Harvin got his foot stepped on but is okay.

RENTON, Wash.—The Seattle Seahawks say accusations that star running back Marshawn Lynch was involved in an assault and damage of personal property are “bogus.”

In a statement Tuesday morning the team says it has “the utmost respect for the investigative process,” but that after speaking with Lynch the Seahawks concluded the allegations were without merit.

The Bellevue Police Department released a statement Monday saying the alleged incident took place around 2:30 a.m. Sunday and that Lynch is alleged to have been involved. Bellevue police are investigating.

The incident was reported by a female about 12 hours after it allegedly took place at a downtown Bellevue apartment. Police say there was no domestic violence or sexual assault involved in the allegation.