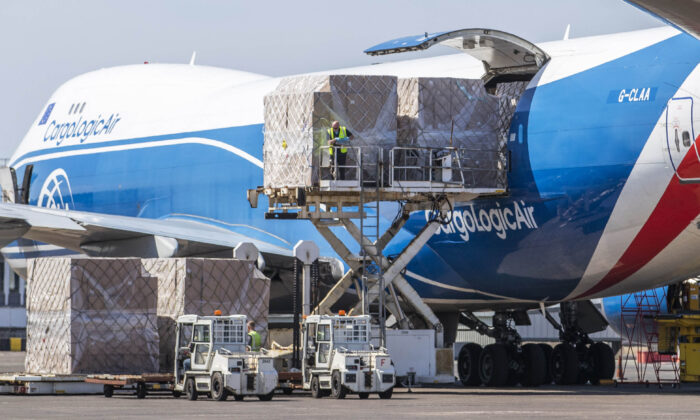 More than 17 percent of the imported health supplies on the UK’s “disaster relief list” came from China, a new report said.

The report (pdf), published on Tuesday by British think tank Civitas, said the figure was at 6 percent in 2019 but almost tripled since the CCP (Chinese Communist Party) virus pandemic.

More than half of the money (£3.45 billion or $4.3 billion) spent on Chinese supplies was for CCP virus test kits, 63 percent of which came from China.

In 2015, only two percent of testing and diagnostic supplies were from China, but the number has surged to 37 percent in 2021.

Among the imported products, the UK is most reliant on Chinese paper masks, with 90 percent of the supplies coming from the communist country.

The report also found that a quarter (24 percent) of all medical consumables such as oxygen, needles, and syringes, almost 80 percent of bandages, 54 percent of gloves, and 87 percent of Hydrocortisone were imported from China.

None of the bedside monitors came from China in 2015, but the situation changed in the last number of years, with almost half (45 percent) of imports in 2021 coming from China.

China also sold to the UK 43 percent of its imported emergency trolleys and wheelchairs in 2021.

The report said the reduced reliance on Chinese PPE is partly due to the government’s PPE strategy, showing “how targeted action can succeed.”

Civitas said more research is needed to assess the real extent of China’s presence in the UK’s health supply chain, for example, “especially on Active Pharmaceutical Ingredients manufactured in China for medicines made elsewhere.”

The think tank warned that over-relying on health supplies imported from China can give the country’s communist regime the chance to “switch off” medical supplies.

In their recommendations, authors Robert Clark and Richard Norrie called on the government to introduce a National Health Service (Security) Act that would “preferably include a registry whose data would include tracking APIs, and a commitment to report on medical supply chain vulnerabilities and the dependence and vulnerability of this supply chain to China, plus a future publication to update the Integrated Review on how the UK will address vulnerabilities in medical manufacturing.”

Clark, head of defence and security at Civitas, said the figures suggested the UK is “dangerously over reliant on China.”

“When the pandemic hit, we were caught napping and had to go ‘cap in hand’ to China to keep the NHS afloat—the health equivalent of going to the IMF [International Monetary Fund] for a loan in the 1970s. Because of this, we are now sending the Chinese government over £6 billion ($7.5 billion) a year in UK taxpayers cash to import basic medical supplies,” he said.

“Let’s not be naïve about China. This is an urgent issue for health bosses with the risk that future geo-political spats could lead to the Chinese switching off critical medical supplies destined for the NHS.”

In an email to The Epoch Times, a spokesperson for the Department of Health and Social Care said, “The NHS, through NHS Supply Chain, secures medical goods from a diverse range of sources.