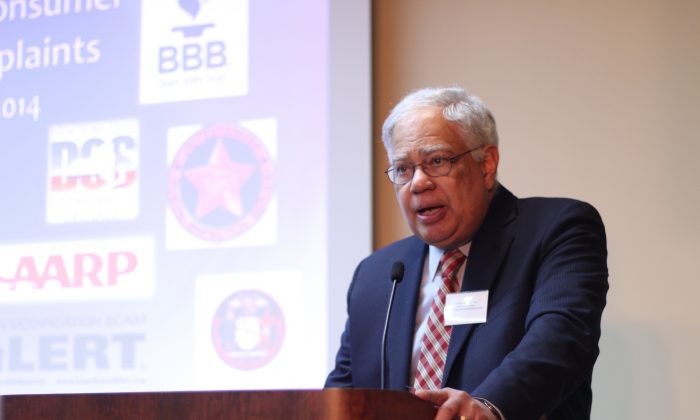 NEW YORK—New York Secretary of State Cesar A. Perales said scams that target immigrants were in the state’s top ten list of rip-offs that threaten the public.

“We’re talking now about very large amounts of money. We’re talking about people who will pay thousands of dollars to someone who will say, ‘I can help you’,” Perales said Thursday.

As immigrants try to navigate their way through the social, legal, and sometimes linguistic barriers to living in the US, they make easy prey for rip-off artists who take advantage of immigrants’ precarious legal situation.

Some scammers pose as lawyers offering legal help, some as state employees offering insider assistance, or travel agents who offer legal advice they are not authorized to give.

“It is very, very dangerous,” warned Perales. “Not only do they [immigrants] lose thousands of dollars that they pay to someone who is really not in a position to help them, but they put themselves in danger.”

Perales referred to the danger of being deported if they submit false information or use other illegal means to stay in the US. “So please, always go to a lawyer who is authorized to help you with your immigration problems or go to a not-for-profit agency established to provide you with the information,” he said.

State agencies caution immigrants to be wary of anyone claiming to give immigration help and to always check their credentials before trusting them. Demand a written contract for services that lists all fees, never pay cash, and beware of businesses that ask for large amounts of money up front, the New York Department of State (DOS) warns.

When dealing with paperwork the DOS recommends never signing blank documents or documents you do not understand. Ask for a copy of all the forms submitted on your behalf and a return of all original documentation. Do not give important legal documents like passports or birth certificates to anyone you don’t trust as they could be withheld as ransom.

Beware of websites ending in “.com” that pretend to be the government’s, or any agency that uses the term “Immigrant Naturalization Service” (INS). That agency closed in 2003 and is now the US Citizenship and Immigration Services (USCIS) under the Department of Homeland Security. Federal government websites end in “.gov.”

Emails announcing you have been selected in a visa lottery should be suspect, as should phone calls supposedly from the government asking for personal or financial info. Some swindlers also claim to have found a problem with your immigration records and ask for money or threaten you with arrest or deportation.

Immigrants from Spanish-speaking countries are particularly susceptible to “Notary scams.” “Notario” in Spanish is an attorney with special legal credentials or someone with a high position in the government. In the US, it is merely someone who witnesses and certifies legal documents with no immigration or legal expertise.
“Notario Publico” imposters have taken advantage of this Spanish cognate to trick immigrants.

Perales introduced a law in 2011 that would make false advertising a crime.

Senate Bill 5672 “requires non-attorney Notaries Public advertising services in a language other than English to prominently display a statement, in the advertisement in such language and in English, that they are not authorized to practice law and have no authority to give advice on immigration law or other legal matters.”

To verify if a person is a licensed lawyer in New York, call the New York Office of State Administration Registration Unit at 212-428-2800. To verify if an organization or person is licensed to help with immigration matters, call the Board of Immigration Appeals at 703-305-9029.

To report a fraud targeted at immigrants or get answers to questions, call the New American’s Hotline at 1-800- 566-7636. The hotline is open 9 am to 8 pm Monday through Friday and can help in over 200 languages. Callers remain anonymous and all calls are kept confidential.