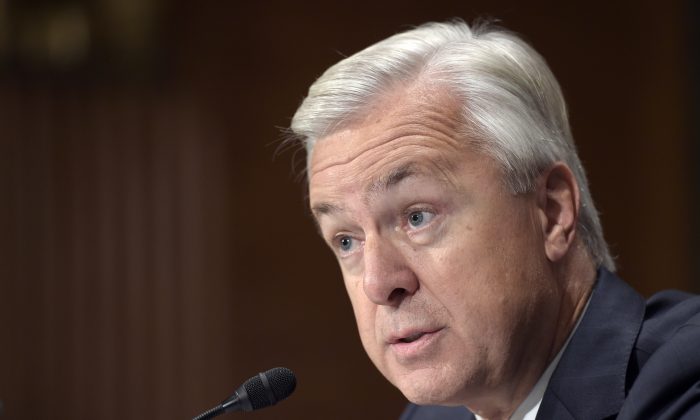 FILE - In this Tuesday, Sept. 20, 2016 file photo, Wells Fargo Chief Executive Officer John Stumpf testifies on Capitol Hill in Washington, before the Senate Banking Committee. Facing bipartisan outrage from a Senate panel over accusations of employee misconduct, Stumpf appeared taken aback by the intensity of the verbal lashing. He bristled at assertions that the alleged opening of millions of customer accounts without their permission was a "scam." (AP Photo/Susan Walsh, File)
US

WASHINGTON—Facing bipartisan outrage from a Senate panel over accusations of employee misconduct, Well Fargo CEO John Stumpf appeared taken aback by the intensity of the verbal lashing. At a few points, he seemed flustered and stumbled a bit over his words. He bristled at assertions that the alleged opening of millions of customer accounts without their permission was a “scam.”

Peppered with criticism for nearly three hours at a hearing Tuesday, the CEO of the nation’s second-largest bank faced calls for his resignation from harshly critical senators. They pressed Stumpf about claims from regulators that Wells Fargo employees opened the unauthorized accounts, transferred customers’ money into them, and even signed people up for online banking in a feverish drive to meet sales targets.

Debit cards were issued and activated, as well as PINs created, without customers knowing, U.S. and California regulators said as they fined San Francisco-based Wells Fargo a combined $185 million earlier this month.

While partly political theater, members of the Senate Banking Committee showed rare bipartisanship in their condemnation of Wells Fargo, and weren’t satisfied by Stumpf’s show of contrition.

“Words that come like a San Francisco fog on little cat feet won’t cut it,” Sen. Sherrod Brown of Ohio, the panel’s top Democrat, told Stumpf. “These were not magically delivered ‘unwanted products.’ This was fraud; fraud that you did not find or fix quickly enough.”

Stumpf said he was “deeply sorry” that the bank failed to meet its responsibility to customers and didn’t act sooner to stem “this unacceptable activity.” He promised to assist affected customers. The bank says it has already refunded to customers $2.6 million in fees charged for products that were sold without authorization.

After being lauded for navigating Wells through the financial crisis that struck in 2008, Stumpf faces what may be an even greater challenge.

Senators of both parties were unrelenting in their attacks. Sen. Bob Corker, a conservative Republican from Tennessee, said it would be “malpractice” if Wells Fargo did not claw back executives’ compensation. Elizabeth Warren, a Massachusetts Democrat and frequent critic of Wall Street, called for Stumpf and Wells Fargo to be criminally investigated and asserted that Stumpf had shown “gutless leadership” during the long-running sales misconduct.

“It struck me that he was berated in a way that shook him a bit,” said Chris Kotowski, an analyst at Oppenheimer & Co. He contrasted that with Stumpf’s usual “poised, deliberate” manner when speaking in other venues.

Wells Fargo, familiar to customers for its stagecoach logo, had also long been known in the banking industry for its aggressive sales goals. The average Wells Fargo household had on average more than six products with the bank, a metric Wells top executives would highlight every quarter with investors. The bank even had a “Gr-Eight” program aiming to raise that number to eight. Wells never reached that level.

Stumpf defended the cross-selling of products — trying to draw customers into taking on more — as “deepening relationships.”

Senators underscored the irony of bank executives boasting on one hand to investors about the profitability of cross-selling, while also firing 5,300 sales employees for related activities.

The senators also challenged assertions that Stumpf and other senior executives at the bank didn’t become aware of the problems until 2013 — when the sales misconduct was reported by The Los Angeles Times. The practices apparently began several years earlier, as Stumpf suggested under questioning.

A major figure at the hearing who was not present was Carrie Tolstedt, the former head of the retail banking business. She announced in July that she would retire from the bank this year and is expected to leave with as much as $125 million in salary, stock options and other compensation.

Senators hammered Stumpf on Tolstedt’s compensation, demanding that he explain why the bank’s board of directors — which he presides over as chairman — hasn’t exercised its authority to take it back from her.

Questioned again by Warren, Stumpf said the bank had not considered firing Tolstedt.

Under the settlement with regulators, Wells Fargo neither admitted nor denied the allegations. It later said it plans to eliminate the sales targets by Jan. 1.

Stumpf offered some detail at the hearing about who was fired, saying “bankers, bank managers, managers of managers, and even an area president.” They ranged in pay from about $35,000 to $65,000.

Not high enough up the chain, senators retorted.