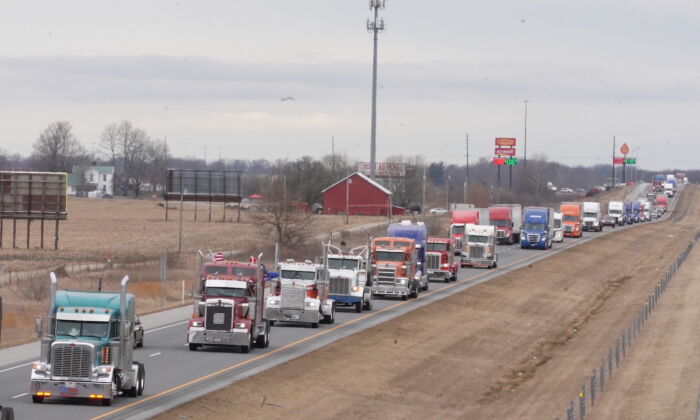 LOS ANGELES—The People’s Convoy is expected to reach Los Angeles in time for the Defeat the Mandates rally at Grand Park on April 10.

Brian Brase, a trucker and co-organizer of The People’s Convoy, told The Epoch Times he expects to reach Phoenix, Arizona, April 6.

“You’re looking at about 100 trucks constantly, but our convoy is made up of cars and campers and motorcycles, not just trucks. So, you’re probably looking at around 500 vehicles total right now that are pretty well sustained. But we grow and shrink throughout the day and multiple times a day,” Brase said.

Organizers announced last week that they were headed to California to protest proposed legislation related to COVID-19 mandates, including Assembly Bill (AB) 1993, before state Assemblywoman Buffy Wicks (D-Oakland) announced on March 29 the bill would be put on hold.

The Convoy has listed 10 bills that it opposes on its website.

“[AB] 1993 being thrown out was definitely a win. We’re happy to see that, but we’ve still got nine others that we need to fight,” Brase said. “I do consider that a win. I obviously can’t say it’s because of the convoy, but I like to think it’s the fact that the convoy is coming to town.”

The other nine bills are “equally as bad,” he said.

Had it passed, the AB 1993 would require proof of COVID-19 vaccinations for all employees and independent contractors to work in California, including truck drivers trying to cross states lines to deliver freight, Brase said.

Though many supporters wanted the truckers to remain in the Washington, D.C. area to demand an end to the emergency orders and special government powers that go along with them, Brase indicated the convoy will return to the D.C. area to finish the job after the California mission.

“Californians seem to very excited for us to come back, especially since we’re going there with a mission of fighting these bills,” he said.

“We are going to Sacramento,” he said “The hope is to meet with California legislators. Obviously, we want to do things diplomatically. We are a peaceful protest. We’re law-abiding [and] peaceful, and we want to have meetings just like we’ve had in D.C. to discuss these issues and hopefully convince many of them to vote against them.”

The convoy will stop in Los Angeles for a few days, then move north to Stockton and on to the Sacramento area, he said.

The convoy also hopes to hold a rally in Sacramento, “but that’s still a very fluid situation,” he said. “We’re still developing that.”

“The route hasn’t been 100 percent nailed down yet as far as California goes, but we’re coming in on the [Interstate] 10,” he said.

From Los Angeles, the convoy will likely head up the I-5, but Brase wasn’t certain.

“I don’t want to say that for sure. The 99 is obviously an option as well,” he said.

Organizers are hopeful they will be able to meet with California lawmakers when they reach Sacramento after the Los Angeles rally.

Though the truckers ran into some roadblocks when the D.C. Metro Police blocked exit ramps on the beltway, Brase said he doesn’t anticipate any problems with the police in Sacramento.

The People’s Convoy “would try to have permits in place for any rally or anything like that within Sacramento,” he said.

In D.C., convoy organizers met only with Republicans, but not for the lack of trying to meet with Democrats, Brase said.

“We definitely tried to get meetings with Democrats, and they just simply wouldn’t see us. They didn’t even give us the time of day,” he said.

“On our end, it’s not a left or right issue. This is an American issue, but our politicians are trying to make it a right issue or a left issue. They seem to be trying to paint us as being some alt-right or, or rightwing movement,” he said.

While many convoy supporters may lean to the right politically, “this movement isn’t about the Republicans and Democrats,” he said. “It’s not about being a conservative or a liberal. It’s about our rights as Americans—our constitutional rights against these mandates, and then, of course, our God-given rights as human beings walking this Earth,” Brase said.

Mike Landis, another trucker and lead organizer, flew back to California recently and met with Rep. Lou Correa (D-Calif.) in Santa Ana on March 21.

“It’s for the people, and it’s not a right or a left thing. It’s an American issue,” Landis said at the meeting which was live-streamed on YouTube.

“The whole point behind what we’re doing comes down to our freedoms, and to get that we need the Constitution. A lot of people don’t know that because of the Emergency Act due to COVID, the Constitution can be null at void at the hands of those in Washington. Right now with the Emergency Act in place, we technically could get in trouble with our convoy because they could say we don’t have the right to our First Amendment if they wanted to,” he said.

Landis thanked Correa for meeting with him. “I am actually extremely excited that you being in the Democratic side have come out to meet with us today,” he said.

Marcus Sommers, 51, also a trucker and co-organizer from Ohio, agreed that The People’s Convoy is about protecting the rights of future generations—for his own family and for every American.

“I’m committed and I’ll be here until the mission is completed,” Sommers told The Epoch Times.

The vaccine mandates are taking away the freedoms of every American, he said.

“It’s unconstitutional. It’s government tyranny. It’s control. It still is ‘We, The People. We still have a constitution, and the people need to stand up and fight back,” he said.

“People really need to understand the importance of how much power they have together in the community, fighting together as the same like-minded people,” Sommers said.

He encouraged community leaders to organize and demand responses from their state and local representatives to hold them accountable for the vaccine mandates.

Sommers said it “would be amazing,” if California Gov. Gavin Newsom met with the convoy organizers when they reach Sacramento.

‘We’ve had Democrats with us joining us on this convoy. It’s just been an amazing thing to watch happen and see how beautiful it can be when people are fighting [for] the same thing,” he said.

Sommers said he expects a “hardy” response from Californians as the convoy returns to the state.

The People’s Convoy left Adelanto, California, on its way to the D.C. area on Feb. 23.