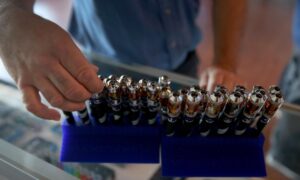 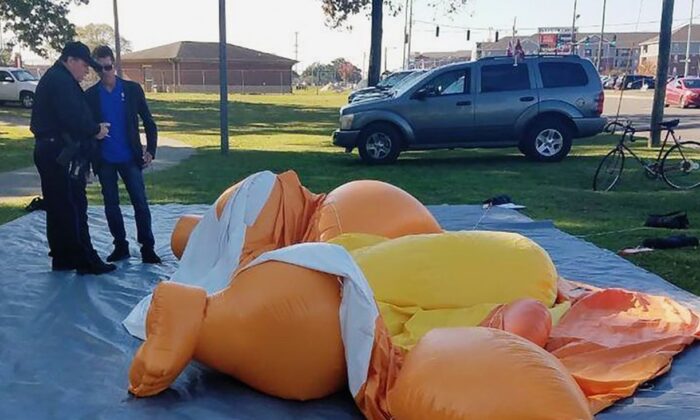 A responding officer and an unidentified man stands by a Baby Trump balloon deflated by someone at Monnish Park as people were protesting President Donald Trump's visit to an NCAA college football game between Louisiana State and Alabama playing nearby in Tuscaloosa, Ala., on Nov. 9, 2019. (Stephanie Taylor/The Tuscaloosa News via AP)
US News

Supporters of President Trump raised thousands of dollars for a man who allegedly popped the “Baby Trump” balloon near the Alabama-LSU game over the weekend.

But in an update on Monday morning, the organizer of the GoFundMe said that “we have been reported by the sympathizers. Apparently we didn’t read the fine print. Gofundme is not going to allow these generous donations to help Hoyt. They will soon likely refund all your support. Apologize for the inconvenience folks. Thanks for the kind words, prayer, and financial support. Reach out to Hoyt on Facebook we love hearing from fellow patriots.”

The update was referring to Hoyt Hutchinson, who was arrested on Saturday after he was allegedly observed by an officer when he cut into the 20-foot inflatable balloon that depicted Trump as a baby, WRIC reported.

Before the update, the page had raised more than $40,000 for Hutchinson’s legal defense fund.

The organizer also said on the GoFundMe page that users can donate to him via Cash App.

The money raised for legal fees would have been donated to Trump’s reelection campaign, according to the organizer.

In 2015, GoFundMe said that it would no longer support legal defense funds, saying it “will not allow campaigns that benefit individuals or groups facing formal charges or claims of serious violations of the law,” according to WRIC.

GoFundMe’s terms of service also has a clause that doesn’t allow any campaign it believes to be “for the legal defense of alleged crimes associated with hate, violence, harassment, bullying, discrimination, terrorism, or intolerance of any kind relating to race, ethnicity, national origin, religious affiliation, sexual orientation, sex, gender or gender identity, serious disabilities or diseases, or financial crimes or crimes of deception.”

The report said Hutchinson, 32, was charged with first-degree criminal mischief, which is a Class C felony.

“I got charged, but that’s alright,” Hutchinson said after he was released from jail. “I’d do it again if given the opportunity.”

According to AL.com, a group of protesters inflated the balloon for a demonstration at Monnish Park, located near the Bryant-Denny Stadium that Trump was attending.

The Tuscaloosa Police Department told the news website in a statement that police “officers apprehended the suspect and took him into custody on a charge of Criminal Mischief First Degree. Hoyt was transported to Tuscaloosa County Jail where he was held on a $2,500 bond.” He was later released on bond, reports have said.

During the LSU-Alabama game, Trump and First Lady Melania Trump received cheers from the crowd.