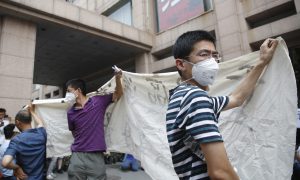 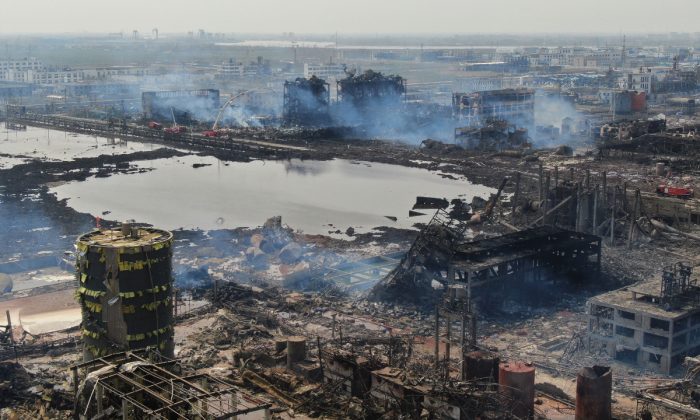 An aerial view shows a chemical plant after an explosion in Yancheng in China's eastern Jiangsu province, on March 23, 2019. - The death toll in a chemical plant explosion in China rose to 64 on March 23 but rescuers found a survivor among more than two dozen still missing in the debris of one of the country's worst industrial accidents in recent years. (STR/AFP/Getty Images)
Social Issues

The official death toll from the massive blast last week at a chemical plant in China’s Jiangsu Province is being questioned after the region’s fire chief suggested that individuals caught at the center of the explosion may have been vaporized, according to a report by state-run media The Global Times on March 24.

As of March 25, official numbers rose to 78 killed, and 13 critically injured by the blast. More than 600 others were injured, and 28 are missing.

The explosion occurred on March 21 at a pesticide factory in Chenjiagang Industrial Park in Yancheng City, Jiangsu Province, on China’s east coast. The blast created a crater and damaged neighboring buildings, while windows in buildings from as far as four miles away were shattered by the force of the explosion.

According to state media, 566 people are receiving treatment at local hospitals. One local individual who wished not to be identified told the Chinese edition of The Epoch Times that local hospitals were filled with people searching for missing loved ones.

Footage of the disaster, including the explosion, was caught by local residents and quickly shared on social media, fueling anger about safety hazards and industrial disasters in the country.

The cause of the explosion is under investigation.

The head of Jiangsu’s fire department, Lu Jun, who responded to the explosion, told the Global Times that 11 of the 17 buildings in the area have been cleared.

“From last night, some of the bodies could not be identified at all. We have to wait for the security bureau to do DNA testing,” Lu said.

“I think that, with such a huge explosive force, which affected a three-kilometer [1.9 miles] radius, I wouldn’t rule out that people at the center of the explosion were instantly vaporized.”

The interview drew widespread attention from the Chinese public, with netizens quickly expressing skepticism on social media about the official death toll, and posing the question, “How many people were vaporized?”

Such questions and doubts were swiftly deleted by the regime’s censors.

Meanwhile, local coverage of the incident has also reportedly been censored as the regime seeks to control information relating to the disaster. One reporter named Wang told Radio Free Asia (RFA) on March 23 that the Chinese regime has ordered all reporters away from the site, and directed media outlets to only re-produce official statements regarding the incident.

“All our reporters have been driven away [from the county]. We have no other choice than to use official reports,” Wang told RFA. “The local government is trying to cool down public attention. They are very experienced at it. You can understand why they wouldn’t allow us to report continually.”

One villager, named Lu Peiyu, told Red Star News that the blast shattered his windows and knocked the doors off their hinges. He said the other houses in his village were damaged in the same way.

Wang said his father was at a neighbor’s house at the time, and had his nose broken by falling debris. When his father came back to their house, he dug through the rubble to find his mother. When he found her, it was too late.

Children at nearby schools were also injured by the blast. Many children were bleeding from their noses and ears, according to state-run media The Paper. A kindergarten and a primary school are both located within a half-mile of the factory.

Locals also complained of the chemical stench after the blast.

“My throat and nose are very uncomfortable [because of air pollution made by the blast],” Chen, a businesswoman who operates a hotel just over a mile away from the blast site, told state-run Qianjiang Evening News.

The owner of the factory, Tianjiayi Chemical Company—which produces more than 30 organic chemical compounds, some of them highly flammable—has a history of work safety violations. In 2018, authorities fined and closed the factory for half a year after finding 13 safety violations, including improper storage of chemicals, local media said.

A similar blast at a chemical warehouse occurred in Tianjin, a port located not far from the capital of Beijing. The 2015 explosion killed more than 160 people, according to state media.