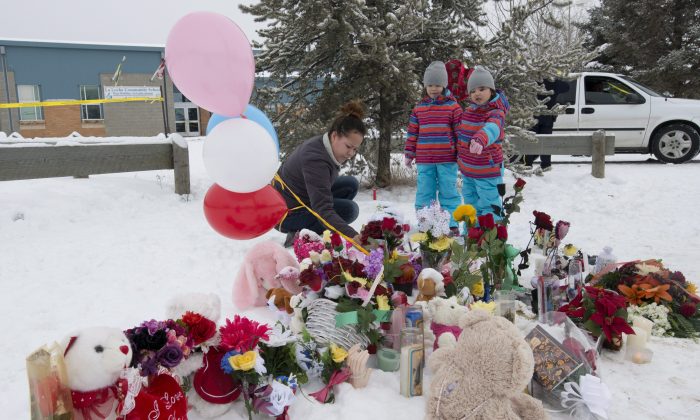 Tashina Montgrand lays flowers outside the La Loche Community School as her daughters look on, Jan. 25, 2016. The Saskatchewan community is struggling to recover after a shooting that left four dead and seven wounded. THE CANADIAN PRESS/Jonathan Hayward
Canada

LA LOCHE, Sask.—Despite the pain and grief following a mass shooting that has torn at the fabric of a northern Saskatchewan town, there is hope among its leaders that what happened will be a catalyst for change.

The violent deaths of four people at a school and in a home—and seven others wounded—have exposed La Loche and its social problems to national scrutiny.

Leonard Montgard, executive director of the La Loche Friendship Centre, suggests locals should look at it as a call to action.

“The stigma that comes with all the things that happen in our community—the negative things, it discourages people from coming to our community to set up,” he said a few days after the shooting.

“And now it’s dependent upon our community members to go forth and set up their own businesses. We have to take that direction.”

La Loche is a town, not a reserve. But more than 90 percent of the region’s population self-identify as aboriginal, the Keewatin Yatthe Regional Health Authority said in its 2014-15 annual report.

A lack of opportunity in the community of about 3,000 has been cited as a reason behind crime rates that are much higher than the provincial average.

Curtis Woloschuk, senior policy adviser for the Saskatchewan Ministry of Justice, said violent crime has dropped 50 percent in La Loche in the last decade. Rates have been dropping nationally as well.

However, a suicide rate triple the provincial average has received a lot of attention since the Jan. 22 shooting.

Kathy Willerth with the Saskatchewan Health Ministry said the suicide rate for the health authority that includes La Loche was 44.6 per 100,000 people from 2008 to 2012. The average provincial rate was 12.2.

But Willerth said the actual number of suicides in the region of about 11,000 people is much lower. There were two in 2010, three a year later, and two again in 2012.

La Loche is not a bad community. This is an isolated incident.
— Leonard Montgard, La Loche Friendship Centre

Resident Perry Herman said the community doesn’t want the outside world to focus on the negative.

“It takes a lot of time for them to realize, and then all of a sudden to step up and say, ‘OK, I need to do something to move on,” he said. “In those times, they need people like counsellors and whatnot. They need people who are going to [help them] get up and to be motivated to move on in life again.”

For Montgard, the problem is economic opportunity.

“La Loche is not a bad community. This is an isolated incident. This could happen to any community anywhere in Canada,” he said.

“But we have economic conditions and social conditions that are, bar none … really, really hurtful to our community and … they’ll take time to change.”

A 17-year-old boy has been charged with first-degree murder and attempted murder in the shootings.

From The Canadian Press, with files from Chinta Puxley in Winnipeg