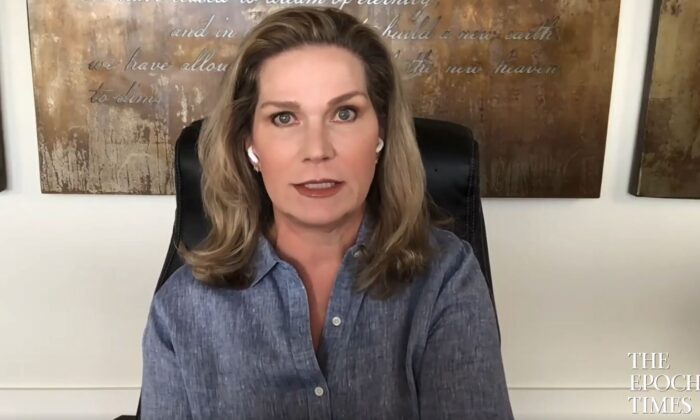 Catherine Engelbrecht, co-founder of True the Vote, is interviewed on EpochTV’s “Crossroads” program on Nov. 11, 2022. (Screenshot/ EpochTV)
By Ella Kietlinska

The most valuable lesson a True the Vote co-founder took from being jailed for contempt of court a week before the 2022 midterms was the realization of how important the right to vote is in protecting people’s freedoms.

Catherine Engelbrecht, co-founder of the election integrity group True the Vote, and Greg Philips, a True the Vote board member, were detained by the U.S. Marshals Service on the orders of the federal judge in connection with a civil lawsuit brought against True the Vote by Konnech, an election management software firm.

In September, Konnech sued True the Vote and its leaders, alleging that they gained unauthorized access to its computers and obtained information from them while defaming the company.

In the lawsuit (pdf) and a motion for a temporary restraining order (pdf), Konnech said that the defendants made “completely baseless claims” that Konnech’s CEO and employees were Chinese operatives and that the FBI was investigating Konnech.

The judge ordered the defendants in September to identify each person and group involved in accessing the computers and to disclose how the computers were accessed.

The defendants refused to reveal the source of their information, “arguing that to do so would hinder an FBI investigation concerning the matter, or jeopardizing ‘national security,’” according to the judge’s order.

At the end of October, Phillips said in an affidavit that defendants would “comply fully” with the order (pdf), and that the name of one person who was an FBI confidential informant and accessed information from a computer was revealed in court during a hearing.

Phillips also said that the only people who had “possession, custody, or control” of the information were the person whose name was revealed in court and the FBI and its agents.

When Phillips and Engelbrecht continued refusing to reveal other information, including the name of the second person who was present when Philips allegedly viewed some data on a computer, the judge ordered the defendants jailed “until they fully comply” with the order to disclose information.

Engelbrecht and Phillips were released from jail a day before the midterms through an emergency appeal to the 5th Circuit Court, which overturned the lower court’s order.

Two weeks after the election, the court of appeals cleared the two True the Vote leaders of contempt of court.

In October, Konnech’s CEO was arrested for allegedly stealing poll worker data and hosting it on servers in China. Those charges were dismissed by a California judge on Nov. 9 at the request of Los Angeles District Attorney George Gascón.

“We were held in contempt of court in a civil case where the federal judge decided to imprison us without bond in a medium security criminal penitentiary,” Engelbrecht said about the imprisonment of her and Phillips.

“When the sentence first was given in the courtroom and we were taken into custody, initially the U.S. marshals didn’t even know quite how to book us because what was happening was so unprecedented,” Engelbrecht said. “The term political prisoner comes to mind.”

Every station of law enforcement that Engelbrecht and Phillips came in contact with found their imprisonment unprecedented in the context of a civil lawsuit, Engelbrecht said.

They were put into solitary confinement, supposedly for their own safety, because they were sentenced to a criminal facility, she added.

“It [happened] the week before midterms when an organization like True the Vote is at its peak in terms of the work we’re doing on the ground. And it took us absolutely off the field.”

In jail, when Engelbrecht was pulled out into a line to undergo some “awkward” medical testing, an inmate who probably saw her “viscerally objecting” told Engelbrecht: “You need to understand that in here, your life is not your own.”

“That just sunk to the core of my being,“ Engelbrecht said. “I was in a place where my life was not my own. Yet, on the other side of those walls, I fight daily for people’s voices to be heard through the power of their vote and to engage in the process of good governance.”

Seeing “how quickly that can be lost, and how precious it really is,” Engelbrecht understood “how important it is that we realize the battle that we are in.”

To say that her resolve has redoubled would be an understatement, Engelbrecht continued. “I am more determined now than ever to stay this course because I think our country is in peril. We must stay engaged or we risk losing those freedoms that we so often take for granted.”

“Things like this are happening with increasing regularity,” she noted.

Engelbrecht shared that during the 2022 midterm elections, she observed what she described as “lawlessness of process,” referring to problems with mail-in ballots and issues of chain of custody as well as other problems.

There had been influential voices that had been cautioning people to only vote on Election Day, Engelbrecht said. However, True the Vote and others in their circle cautioned not to do that because it was not “the level playing field.”

“If everyone only votes on election day, then that would be a different matter,” Engelbrecht said, “but, in fact, when you have other camps getting out their votes early and being able to tactically anticipate that if votes coming out on Election Day are a large part of what needs to be focused on, it makes it much easier to throw a wrench into those plans and wreak all manner of havoc.”

“Being aware of what we face as a country,“ Engelbrecht hopes that “we maybe find our common humanity back as Americans and realize that we are a lot more alike than we are different.”

“It really doesn’t in the end matter if you are a Republican or a Democrat. If you love this country, you want the best for your kids, you want for freedoms for yourself and your fellow countrymen, then there’s common ground to be found.”

“We’ve got to find a way to work together where we can so that we can preserve the opportunity to argue at the elections, argue at the ballot box, but let’s argue, let’s not go to war.”

“I think that left to its current trajectory, there are some dark days and America needs to stand up now and unite.”