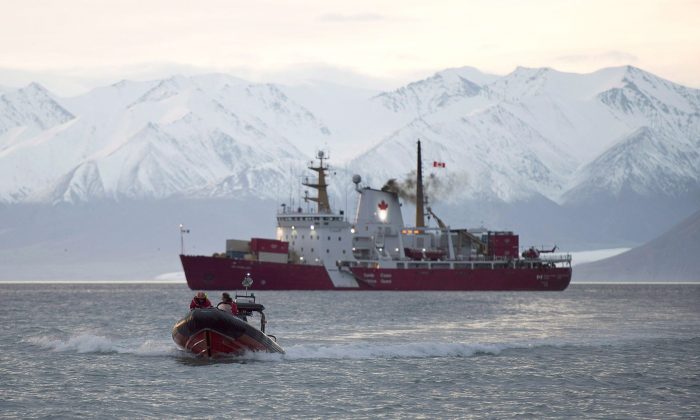 The CGS Des Groseilliers, an icebreaker in the Canadian Coast Guard, sits in Pond Inlet, Nunavut, on Aug. 23, 2014. As Canada prepares to hand off leadership of the Arctic Council to the United States this weekend, a new survey suggests security fears are growing among people in Arctic countries. (The Canadian Press/Adrian Wyld)
Canada

IQALUIT, Nunavut—Security fears in the Arctic are growing, suggests a new survey of people from the eight countries that ring the North Pole.

“There is a sense that there is a threat,” said Sara French of the Munk-Gordon Arctic Security program, which conducted the survey of 10,000 people as Canada prepares to hand off leadership of the Arctic Council to the United States this weekend.

The council, which organizes social and environmental research and regulation in the North, has been seen as a model of international cooperation. It has even negotiated a binding international treaty on search and rescue operations.

Many would even like to see Russia excluded from the council.

But Russia’s actions in Ukraine, as well as recent massive Arctic military exercises and bomber missions up to the edge of international airspace, may have thrown a chill into northern cooperation.

About one-third of the people surveyed in five of the eight Arctic countries believe the threat of armed conflict in the Arctic grew over the last year. That ranges from 24 percent in the continental U.S. to 35 percent in Norway.

Among Canadians, that percentage stands at 36 percent in the south and 30 percent among northerners. And in Iceland, Finland, and Russia, slight majorities agreed the Arctic is less peaceful this year than last.

Meanwhile, fewer than one in 10 surveyed in each country felt the threat had decreased in the region.

Many would even like to see Russia excluded from the council. About 38 percent of respondents in southern Canada felt that way, along with 32 percent of Americans and 44 percent of Swedes.

But French pointed out that none of the eight countries registered a majority wanting Russia out of the council. And she added that in Russia, only five percent of the people wanted to leave the council.

“There’s no doubt that the kind of politics (we’ve seen) is having a spillover effect,” she said. “The desire to want to continue to cooperate is still there.”

French said much of the political rhetoric over the Arctic from various leaders is intended for domestic political consumption. The real work of the Arctic Council is unaffected, she said.

One is held at conference tables and meetings, the other is with headlines and sound bites.

“This other discussion has tended to play into national myths,” French said. “Keen Arctic observers can separate the two.”