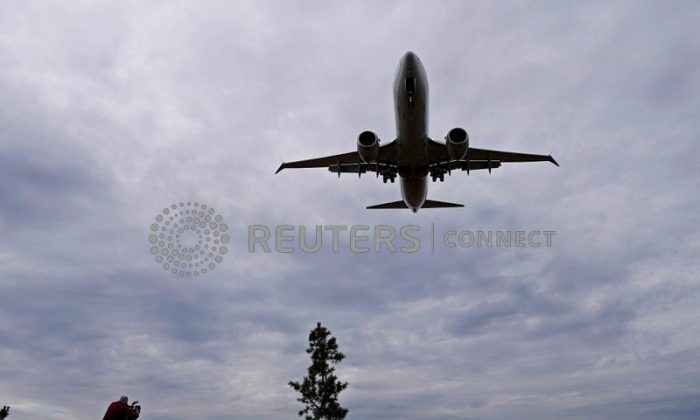 A stock photo of a plane. (Joshua Roberts/Reuters)
Trending

A teacher said that she was speaking to a seatmate on a plane about teaching at a low-income school is “heartbreaking.”

She said that other passengers gave her $530 to help students.

“We need donations in order to thrive at a school,” Bermudez told ABC News, adding she was “blown away” by all the donations. “Education is expensive. It’s nice to have these books, and it’s nice get to have one less thing that a parent has to buy.”

“We might not have all the same resources, but we fight for them,” she said.

The 14th District was on hand as Good Morning in America and @KidsInNeed surprised @ACEROSCHOOLS Carlos Fuentes School with a huge donation of school supplies. @GMA shared this wonderful story of teacher Kimber Bermudez’s efforts in school fundraising. https://t.co/mje5rMPVbb pic.twitter.com/eQ2ZYeK3Cy

ABC reported that the Kids in Need Foundation (KINF), which supplies school supplies to students, decided to help her, giving her a donation of more than $300,000.

“This is absolutely incredible,” Bermudez said. “I couldn’t think of a more deserving group of students.”

KINF said that it has distributed over $1 billion in supplies to kids in need. “I know firsthand what it’s like not to have the supplies that you need in the classroom,” said Renay Dossman, KINF’s executive director.

“This is our future,” Bermudez added on ABC, referring to the children.. “We need your help.”

“The man behind me tapped my shoulder. I turned around and he apologized for listening in to my conversation, and he handed me a wad of cash. He told me to “do something amazing” and sat back down. I was in complete awe that I had touched a stranger. I realized that there was $100 on top, and started to cry. I thanked him and told him how I would buy my students books and give back to the community. I didn’t count the money from that man, but I would later find out that he gave me $500.”

“The plane landed and the man on the aisle across from me told me that he listened as well. He said that he didn’t have much, but he gave me $20. As if my heart couldn’t be any happier the man in front turns around as well. He also handed me money, and said that he only had $10. I started crying on the plane. I told all four men that I would do something amazing for the kids.

“I was not telling my story to solicit money, and never intended to walk out of that flight with anything other than my carry on. I do however hope that posting this continues the chain reaction of people helping those in need, and especially the children in need. It doesn’t have to be a school in Chicago, and any bit helps!

“My heart is in complete shock and awe right now. When the world seems crazy there are always good people. I would do anything for my students, and want to thank these strangers. I don’t know the name of the man who gave me the $500 or the other generous strangers, but they deserve to be recognized. I am thankful for the good people in this world. No child should ever go without anything. This experience made me want to do more for the kids, and use my gift of speaking to help others in need. I want to pass this story around, and thank those strangers and their amazing hearts!”