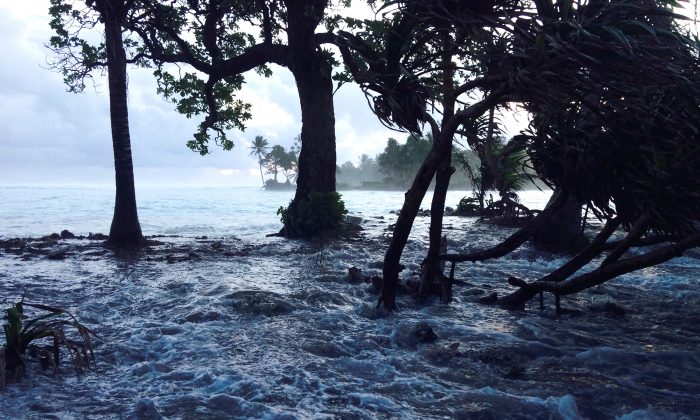 A high tide energized by storm surges washes across Ejit Island in Majuro Atoll, Marshall Islands on March 3, 2014, causing widespread flooding and damaging a number of homes. Climate change is a major concern for Pacific island states such as the Marshals, Kiribati and Tuvalu, where many atolls are barely three feet above sea level and risk being engulfed by rising waters. (Giff Johnson/AFP/Getty Images)
News

People Get Ready, the Train of Climate Change Is Coming

In the words of the 1965 Curtis Mayfield song: “People get ready, there’s a train a-coming.” There really is a train coming, according to the latest, biggest, most detailed report on climate change, released Tuesday.

“Global climate is projected to continue to change over this century and beyond, but there is still time to act to limit the amount of change and the extent of damaging impacts,” states the report.

As in the song, we don’t need a ticket. We just get on board. We can do things. We can build sea walls, we can reduce certain kinds of pollution, we can build reservoirs, and we had better get on board.

Weighing in at a whopping 840 pages, the “National Climate Assessment” documents changes already seen and projects those expected in the future. It talks about what America has done and should do to be resilient.

People who live near the sea or near rivers have seen more flooding. Droughts have broken records, winters have been meaner, and rains more violent. Wildfire seasons have started sooner and lasted longer. The years from 2001 to 2012 were warmer than any previous decade in history.

There is consensus among expert observers that industrial and human activity is causing this. “Nevertheless, a wide array of technological measures and behavioral changes could limit the increase in global mean temperature to two degrees Celsius above pre-industrial levels,” according to the report.

Even though climate change is in process and has already cost billions, it does not have to be a civilization-ender. But it could be.

My dear conservative brethren, my beloved fellow citizens who work in the oil industry, and respected Sen. Mary Landrieu: Let me address you all in sections.

Conservatives: If you dislike President Barack Hussein Obama, just put that aside for a couple of years. He’ll be gone, and this is a bigger thing than who is president. Don’t dismiss this report and its call to action because it’s not your guy in the White House right now.

What I want you to think about is the farmer in your state. Think about your elderly aunt who may not be able to withstand the next brutal heat wave. Think about the people who have already been driven from their homes by floods and wildfires. There is nothing partisan about that.

A very smart and very conservative relative of mine says there have been many climate changes in Earth’s history, so why should we think this one is caused by our activities? Because “they” have better ways to measure things than they used to.

For example, “It doesn’t matter where you are in the United States—climate change has the potential to make your air worse,” said scientist Gabriele Pfister, the lead author of a new study from National Center for Atmospheric Research (NCAR), in a press release.

The study found that ground level ozone has been increasing because of warmer weather. Yet it also found that a sharp reduction in the emissions of certain pollutants would lead to dramatically decreased levels of ozone even as temperatures warm.

The study was done on a new 1.5 petaflops Yellowstone supercomputer. Tools like that make it possible to figure things out in more detail than was possible before.

Another thought for my conservative friends: Consider how we are supposed to be a shining city on a hill. Won’t it be excellent if America shows the world the ingenious, resourceful way to face this challenge? If we could go to the moon in the 1960s, what could we do today?

Oil Industry: You know you are as rich as Croesus, but no amount of wealth will be enough if the whole society collapses. Kindly use some of your dragon’s hoard to build up an alternate energy infrastructure. You can get in on the ground floor!

Sen. Mary Landrieu, (D-La.), speaking of building the Keystone Pipeline to transfer oil from Canada to the Gulf of Mexico, said, “We cannot lose this opportunity to create tens of thousands of jobs and $20 billion in economic activity.”

I understand the urgency of creating jobs, and say to her what I would say to the oil industry: A whole raft of jobs can come from building the infrastructure to help mitigate climate change. We cannot lose that opportunity, either.

This new report is written in plain language, because “it is important that these findings and response options be shared broadly to inform citizens and communities across our nation.”

It also has zippy interactive graphics. Flying clouds and brightly colored charts liven it up a good bit.

So, fellow citizens, friends, take a look at the report, and ask your local leaders, your national leaders, and your businesses to work together on this. We’ve been in tight spots before. We can do it.