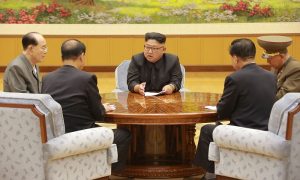 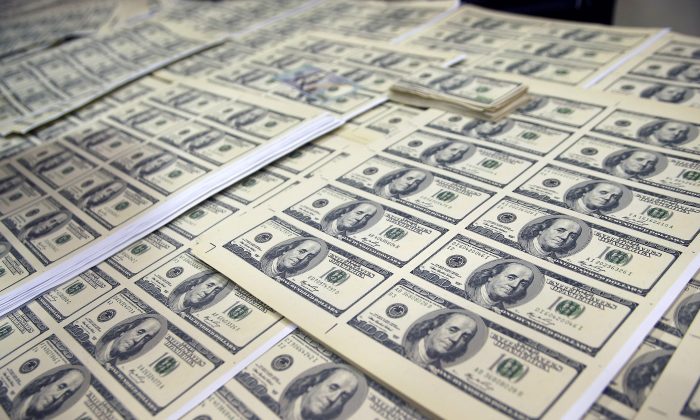 Sheets of counterfeit US dollar bills are displayed after a gang dedicated to forgery was dismantled in Lima, Peru on May 10, 2014. (AFP/Getty Images)
US News

People Arrested for Passing Counterfeit Cash in 11 States, Here’s How to Spot the Fakes

Counterfeiters printing cash in a variety of denominations have been found and arrested across 11 different states over the past six months. reported Fox Business.

The latest reports over the last week of counterfeit cash came out of New York City and Cedar Falls in Iowa.

A report by CBS New York revealed that local business owners in Manhattan had noticed an upsurge in fake $20, $5 and $1 dollar bills in the past few weeks.

Counterfeiters used to specialize in big bills, trying to buy cheap items and collect a lot of real money in change. That trend has changed to small bills that no one bothers to check. These seem to be the new preference of counterfeiters.

Two men who were being investigated for using fake $1 dollar bills at a Walmart in Cedar City, Iowa, back in October were arrested Jan. 16 for that crime.

Earlier in January, another four people were charged as part of a counterfeiting ring operating in Rochester, New York. Those four had defrauded at least 16 local businesses with fake currency over the last two months, reported Fox Business.

According to a 2006 report, the Treasury Department estimates that more than $70 million worth of U.S. bills in circulation are counterfeit—that works out to be approximately 1 fake bill in every 10,000.

“There have recently been concerns over whether North Korea might produce an uptick of their supernote counterfeit bills given the sanctions and pressure put on them recently,” Alex Reichmann, counterfeit money expert and CEO of iTestCash.com, told FOX Business.

“But in general, counterfeit money seems to a steady crime that is always going on around the U.S. and abroad.”

While the incidence of counterfeit bills is low, small business owners need to be aware that counterfeiters are out there, and learn how to spot fakes.

Alex Reichmann shared some of his methods.

First, he recommends feeling the money. Is a bill thicker or thinner than usual? All money is printed on the same paper and should feel about the same. They should all be the same size and weight—about one gram per bill.

Second, Reichmann suggests comparing the suspect fake with a good bill. Examine if the bills feel any different as well as the security features.

If you are still uncertain, get to a good light source and examine the print quality. No matter how old the bill, the printing should be sharp and the ink should be the same color on all bills. The Treasury Department uses very high-quality printing plates and doesn’t release sub-standard bills into circulation. If the printing on a bill isn’t perfect, it might be counterfeit cash.

If you are not sure about the authenticity of a bill, the Treasury Department has a list of steps to follow.

These may come in handy if you suspect you are dealing with a counterfeiter.