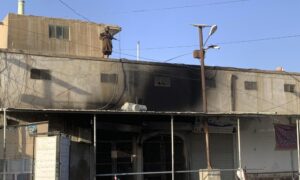 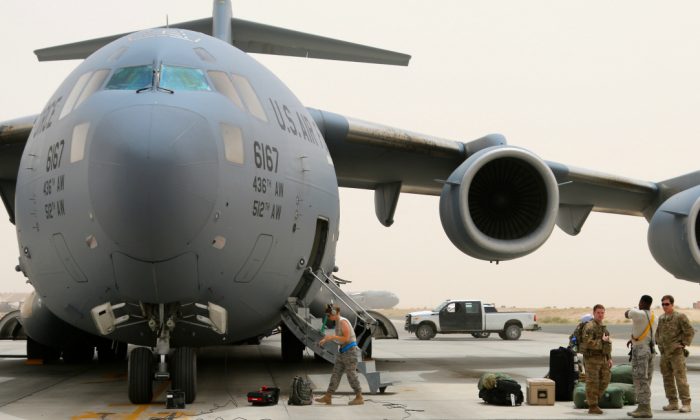 ‘People Are Going to Get Hurt’: America’s Quiet War in Iraq

U.S. ARMED FORCES, Iraq—The aircraft parked on the ramp at this military base in northern Iraq offers a symbolic counterpoint to the White House narrative that U.S. forces are on the sidelines of the ground war against the Islamic State.

U.S. Army medevac Blackhawk helicopters are based here, including the one that picked up mortally wounded Navy SEAL Charles Keating IV under heavy enemy fire during a May 3 battle north of Mosul.

Army Apache attack helicopters; intelligence, surveillance, and reconnaissance aircraft; and a variety of armed special operations aircraft from various military branches are also lined up on the tarmac.

This base is an operational hub for Operation Inherent Resolve, the U.S.-led, 66-nation coalition combating the Islamic State, the terrorist army also known as ISIS that holds territory in Iraq and Syria.

From the base, which is in the vicinity of Erbil, the capital of Iraqi Kurdistan, U.S. and coalition personnel coordinate airstrikes to support Kurdish peshmerga forces. U.S. special operations troops also stage operations from here to advise and assist the peshmerga during combat operations.

To accomplish the advise-and-assist mission, U.S. special operations troops frequently go into areas where combat is happening. Additionally, while embedded with the peshmerga on the ground, U.S. special operations troops sometimes call in airstrikes from coalition warplanes against ISIS forces, a U.S. Army officer told The Daily Signal on condition of anonymity due to security concerns and restrictions on media communication.

The White House, however, has insisted U.S. ground forces in Iraq are not in combat.

The day of Keating’s death, White House Press Secretary Josh Earnest told reporters in Washington: “The relatively small number of U.S. service members that are involved in these operations are not in combat but are in a dangerous place.”

With the Peshmerga on the Front Lines Against ISIS

The night after Keating was killed, the mood on the base in northern Iraq was somber, yet there was not a feeling of shock or surprise.

For many U.S. military personnel on the ground in Iraq, Keating’s death underscored something they’ve known for a long time—U.S. special operations forces are neck deep in the daily grind of the ground war against ISIS.

“Most people took it in stride,” the Army officer told The Daily Signal. “We’re in a war zone, and this place is dangerous. We know people are going to get hurt.”

This base in northern Iraq has all the trappings of other U.S. military installations spread across the Middle East, North Africa, and Central Asia.

It has the tent gym loaded with Crossfit equipment and truck tires stacked out back. There are the civilian contractors in khaki 5.11 Tactical cargo pants and button-down shirts. And inside the chow hall, called a DFAC, there is an eclectic mix of uniforms from various coalition countries and military branches.

There’s also a subgroup of oft-bearded, elite troops who tend to stick to themselves.

The infrastructure at the base has noticeably expanded since this correspondent last visited in September 2015. There are more troops, tents, aircraft, and equipment here than eight months ago.

The installation’s growth reflects the creeping increase in the U.S. presence in Iraq, and the increasingly indispensable role U.S. airpower and special operations support are playing in the ground war against ISIS.

“We can’t fight without U.S. airstrikes or U.S. support,” a Kurdish official at the Kurdistan Region Security Council told The Daily Signal on condition of anonymity due to security rules. “But the U.S. mission can’t exist without us. It’s a partnership.”

U.S. special operations forces in Iraq conducting the advise and assist mission are not sequestered inside fortified compounds impervious to attack.

The special operations forces, including Navy SEALs and Army Special Forces, deploy to team safe houses behind the front lines to carry out their mission and to forward stage as land-based, quick-reaction forces in case U.S. forces come under attack.

The Navy SEAL quick reaction force in which Keating served was stationed at one such team house outside Mosul. The Navy SEALs deployed to the firefight in “nontactical vehicles,” military jargon for civilian SUVs. The ensuing firefight lasted for hours, according to military personnel and news reports.

Keating was the third U.S. service member to die in Iraq from enemy fire since Operation Inherent Resolve began in 2014. And the May 3 battle wasn’t the first time U.S. aircraft have taken fire from ISIS over Iraq.

In September 2015, Air Force pararescuemen, also known as PJs, and combat rescue officers from the 57th Rescue Squadron, then deployed to this location, told The Daily Signal that ISIS forces frequently fired on the HH-60G Pave Hawk helicopters they used to forward position behind enemy lines.

“We take fire every time we go out,” a combat rescue officer said in September.

And last September, U.S. Air Force A-10 attack pilots flying missions over Iraq and Syria from a base in the Persian Gulf region said the volume of surface-to-air fire they faced was much higher than in Afghanistan.

“There’s a real threat here, unlike in Afghanistan,” an A-10 pilot told The Daily Signal in September. “I’ve had a few close calls. Do we respect the threat? Yes. Are we afraid of it? No.”

The Department of Defense said it officially maintains 4,087 troops or less in Iraq and has plans to increase the number of special operations troops and support personnel it has in Syria from 50 to 300.

The number of U.S. troops on the ground in Iraq and Syria is not, however, reflective of the aggregate U.S. war effort against ISIS.

To support Operation Inherent Resolve and military operations in North Africa, as well as operations in Afghanistan, the United States is standing up new bases and refurbishing old ones across the Middle East, reflecting a reversal of White House plans to draw down U.S. military forces in the region.

“It’s busier now than it was a year ago,” Air Force Lt. Col. Mike Cummings, a C-130 pilot from the Alaska National Guard, told The Daily Signal during an interview at an undisclosed location in the Persian Gulf region.

“We were drawing down and now we’re building back up,” Cummings said. “Now we’re moving in the opposite direction.”

As of the end of April, the U.S. has conducted 9,073 airstrikes in Iraq and Syria in support of Operation Inherent Resolve, according to the Pentagon. Nearly all the U.S. military aircraft, manned and unmanned, which conducted those airstrikes launched from bases and Navy vessels outside of Iraq and Syria.

U.S. Central Command, or CENTCOM, declined to disclose the number of bases U.S. forces use throughout the Middle East to support Operation Inherent Resolve.

In an emailed statement to The Daily Signal, a CENTCOM spokesperson said: “We maintain the necessary forces and capability throughout the region to assist our partners and respond to threats as appropriate.”

The current total number of U.S. troops throughout the entire Middle East region is still only a fraction of the approximately 170,000 U.S. troops in Iraq alone during the 2007 Iraq War surge.

And unlike the days of Operation Iraqi Freedom and Operation New Dawn, there is not a countrywide network of U.S. forward operating bases and combat outposts inside Iraq from which U.S. ground and air forces can currently project power.

The war against ISIS in Iraq is a frontal war, with a clear delineation between enemy and friendly territory. In Iraq, there is a 1,200-mile-long front line, which is defined in places by trenches and hilltop forts. Opposing camps trade potshots across no man’s land.

As Iraqi and Kurdish forces take back ground on ISIS, coalition air assets and advise and assist personnel are constantly moving to new bases closer to the shifting front lines. Some bases in the Persian Gulf region that were strategically positioned to launch warplanes a year ago are now inconveniently distant from the battlefield’s northward shifting center of gravity.

Bases in Turkey, consequently, have played a more important role due to their geographical proximity to the battle space.

The Turkish airbase at Incirlik, for example, was reopened to U.S. Air Force F-16s in August 2015 to conduct airstrikes against Islamic State targets. The F-16s were swapped out for A-10 attack planes in October. And, according to news reports, U.S. F-15C fighter jets and F-15E strike aircraft have also deployed to Incirlik since last August.

The total U.S. military force deployed at Incirlik has grown to nearly 2,500, up from about 1,300 last year, according to news reports.

The Daily Signal recently visited an Air Force base at an undisclosed location in the Persian Gulf region supporting Operation Inherent Resolve. According to military officials at the base, there are about 1,800 U.S. troops and about 2,200 civilian support personnel deployed to the facility.

The base is a key airlift hub for Operation Inherent Resolve and for supporting military operations in the Horn of Africa. The location is also the launching pad for U.S. and British drones flying missions over Iraq and Syria. Other coalition partner countries fly intelligence, surveillance, and reconnaissance missions from here.

Air Force Col. Clarence Lukes Jr., commander of the 386th Air Expeditionary Wing headquartered at the undisclosed base, said Pentagon planners drew up a three- to five-year plan to build up the base’s infrastructure after Operation Inherent Resolve kicked off in 2014. And, Lukes added, the Pentagon plans to use the base “for much longer.”

“This puts us in a perfect crossroads for different types of mission sets … regardless of the adversary,” Lukes said.

The base has a swimming pool, a movie theater, and a state of the art gym. Plans are under way to build brick and mortar dormitories to replace the tents and trailers in which most personnel now live.

There’s a recreation center called the “Drop Zone” with pingpong tables, flat screen TVs tuned to the Armed Forces Network, and cans of non-alcoholic Beck’s beer in the fridge.

A coffee shop called the “Green Bean” offers free Wi-Fi, mocha lattes, and protein shakes. Wi-Fi is available throughout the base, and self-serve ice cream and Krispy Kreme donuts are always available in the DFAC.

U.S. servicemen and servicewomen say there has been a noticeable uptick in operational tempo since Operation Inherent Resolve began almost two years ago. Yet, many also consider the battle against ISIS to be just the latest chapter in nearly 15 years of nonstop combat operations.

For many U.S. military members, combat deployments are now a way of life.

“It’s like the last one never ended,” Cummings, the C-130 pilot, said. “It’s not really the start of something new.”