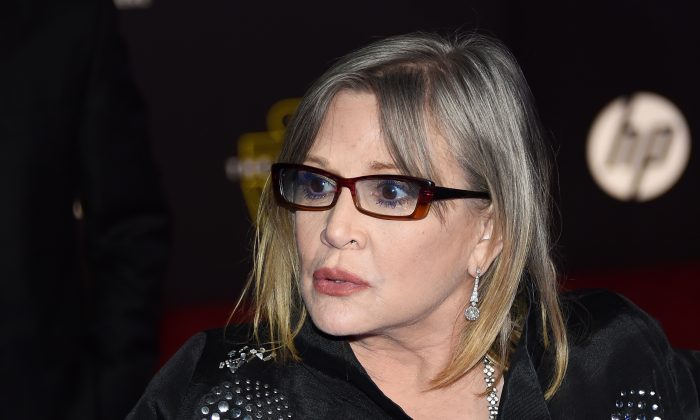 People Were Debating Whether or Not Star Wars’ Carrie Fisher Aged Well. Then She Chimed In…

Carrie Fisher, one of the three main stars of the Star Wars franchise, has hit back at critics in a series of tweets.

People have been debating whether or not Fisher, who played Princess Leia in the original trilogy and returned for the newest installment, “The Force Awakens,” has aged well. And Fisher decided it was time to add her thoughts.

“Please stop debating about whether or not I aged well,” she wrote on Twitter. “Unfortunately, it hurts all three of my feelings. My body hasn’t aged as well as I have.”

“Youth and beauty are not accomplishments, they’re the temporary happy by-products of time and/or DNA. Don’t hold your breath for either,” she added.

Fisher also retweeted a comment from another Twitter user that noted her male co-stars from the original trilogy, Harrison Ford and Mark Hamill, have faced fewer comments about their older appearances in the latest Star Wars movie.

Fisher has been vocal about the pressure she’s faced in terms of her body over her career.

She told Good Housekeeping magazine that she felt pressure to lose weight for her role as an older Leia, saying:

“They don’t want to hire all of me—only about three-quarters! Nothing changes, it’s an appearance-driven thing. I’m in a business where the only thing that matters is weight and appearance. That is so messed up. They might as well say, ‘Get younger,’ because that’s how easy it is.”

She added that she did lose weight, by eating less and exercising more.

“There is no other way to do it. I have a harder time eating properly than I do exercising,” she said. “It’s easier for me to add an activity than to deny myself something.”