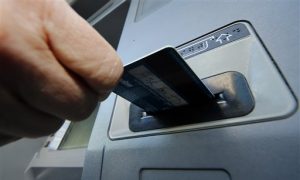 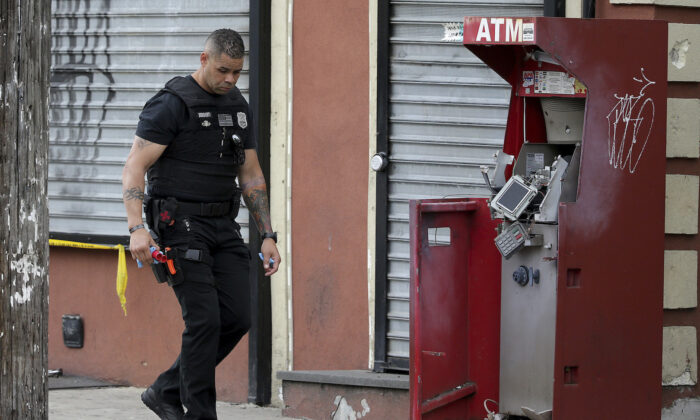 A member of the Philadelphia bomb squad surveys the scene after an ATM machine was blown-up at 2207 N. 2nd Street in Philadelphia, Pa. on June 2, 2020. (David Maialetti/The Philadelphia Inquirer/AP)
Crime and Incidents

People Are Blowing Up, or Just Taking, ATMs in Philadelphia

PHILADELPHIA—Explosions have destroyed or damaged 50 cash machines in and near Philadelphia since the weekend, and one man has died, in a coordinated effort to steal them or blow them up and take the money inside, authorities said.

The federal Bureau of Alcohol, Tobacco, Firearms, and Explosives is leading the investigation, and no arrests have been announced. A 24-year-old man died hours after trying to break into an ATM early Tuesday, and explosives were recovered, police said.

But the ATM hits have continued, with explosions echoing overnight into Wednesday in the city or just outside it. Police are asking businesses that host the machines to take the cash out to discourage further hits.

Outlaw made her comments Wednesday while taking follow-up questions at a news briefing about the unrest, noting a “marked increase in attempts to forcibly enter ATM machines.”

She and other officials have not hinted whether they believe the ATM hits might be a crime of opportunity during the unrest, could have some other connection, or are altogether unrelated.

Cash machines in some other cities, including Pittsburgh and Minneapolis, have been looted or damaged in recent days, but Philadelphia’s problem appears to be on a larger scale.

Thieves have blown up the machines, usually at convenience stores and gas stations, in at least 50 cases to get to the cash, while sometimes the entire machines are stolen, officials said.

Around 5 a.m. Wednesday, the ATM hits spread outside the city for the first time to neighboring Upper Darby Township when an explosion was reported at a machine outside a strip-mall nail salon.