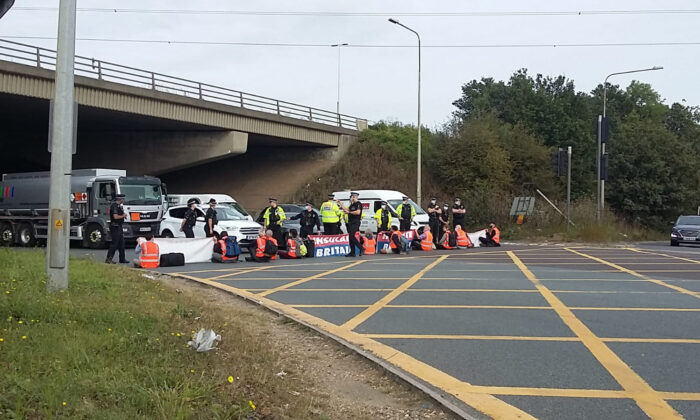 Those who missed work, medical appointments, or other significant things due to protest-related traffic disruptions on parts of the UK’s motorways have been asked to contact the police.

Essex Police on Wednesday called on people affected by eco-activist group Insulate Britain’s road-blocking tactic on the M25 and M11 motorways in Essex to come forward and talk to the police.

Insulate Britain, a climate change campaign group loosely related to Extinction Rebellion that uses traffic disruption tactics to demand the UK government insulate all British homes, started its campaign on Sept. 13 by blocking junctions on M25, Britain’s busiest motorway. It has continued doing so on a number of motorways and busy London roads despite court injunctions and convictions.

The force said officers had spoken to a number of people affected by the disruption, and are looking to speak to more people.

“We are aware these incidents have caused a significant amount of disruption to motorists and many people have been significantly inconvenienced by them,” Detective Sergeant Christopher Arnold, who is leading the investigation, said in a statement.

“Our complex investigations are progressing and we would now like to hear from anyone who has not yet spoken to us but believes they have been inconvenienced by the disruption,” he added.

Arnold said the investigation would like to hear from people who “could not attend medical appointments, could not attend planned work and therefore missed out on payment,” and those who “missed, or were severely delayed, attending any significant life events.”

People who were simply delayed by the congestion but didn’t miss anything important are not expected to come forward, the police added.

On Nov. 17, nine activists aged between 20 to 58 were jailed for breaching court orders, with more expected to appear in court soon.

The nine defendants were given sentences of between three to six months, and police forces affected are working with the Crown Prosecution Service in relation to the other traffic disruption incidents and arrests.

After the sentencing, Insulate Britain called on members of the public to join its campaign, saying they “also have a duty to act.”

Three days later, up to 200 activists blocked a London bridge, resulting in a further 124 arrests.