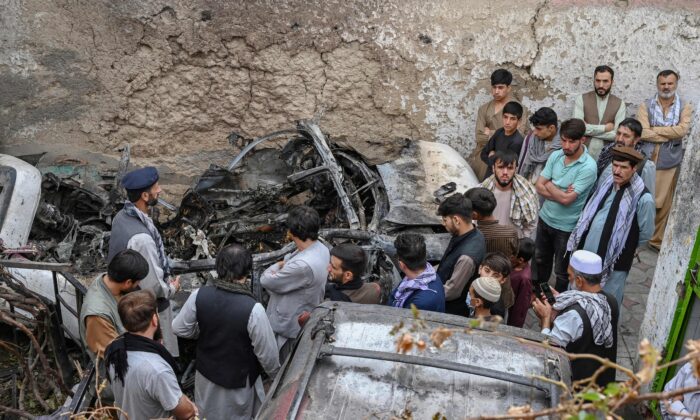 Afghan residents and family members of the victims gather next to a damaged vehicle inside a house, day after a U.S. drone airstrike in Kabul, Afghanistan, on Aug. 30, 2021. (Wakil Kohsar/AFP via Getty Images)
US

In the immediate aftermath of the attack, CENTCOM Commander Gen. Kenneth “Frank” McKenzie described the bombing as a successful blow to ISIS-K, while Gen. Mark Milley called it a “righteous strike.”

Not to be outdone, President Joe Biden referenced the strike in his Aug. 31 speech in a warning to ISIS-K: “We’re not done with you yet.”

It took weeks before the Pentagon acknowledged, on Sept. 17, 2021, that the drone strike killed innocents and failed to kill any terrorists. Until then, officials continued to insist that the bombing was a justifiable retaliation for the Kabul airport terrorist attack days earlier, which had killed 170 Afghan civilians and 13 members of the U.S. military.

At a Feb. 9 Senate Judiciary Committee hearing on the Pentagon’s use of drone strikes, Sen. Josh Hawley (R-Mo.) called for answers about the discrepancies between what military officials knew and what they told the public about the events surrounding Aug. 29.

Hawley said he knows mistakes can be made that result in tragic civilian deaths. But he said he doesn’t understand why the U.S. government seemingly attempted to deny killing civilians for weeks in the wake of the Aug. 29 strike.

“Here’s what I don’t understand entirely: The CIA is warning, ‘You got it wrong, you’re targeting civilians,’ and they ended up killing civilians,” Hawley said, referencing a Sept. 18 CNN report about the CIA purportedly warning Pentagon officials immediately after the attack that they may have killed civilians.

“However, the next day—after the CIA warning, after the deadly strike on civilians—Gen. McKenzie goes out and says that the strike had dealt ISIS-K a crushing blow. The chairman of the Joint Chiefs of Staff (Milley) calls it a righteous strike.”

Hawley called for military leaders to appear in front of Congress.

“These folks ought to be testifying under oath about what happened,” he said. “I suspect that when [Gen. McKenzie] is asked what he knew and when he knew it, I suspect you’ll find they were informed at a very early time that they had gotten the wrong target.”

Some of Hawley’s questions already have been answered. McKenzie, Milley, and Defense Secretary Lloyd Austin said at a Sept. 29 House Armed Services Committee (HASC) hearing that they realized within hours that the Kabul strike killed civilians.

“We knew the strike hit civilians within four to five hours after the strike occurred, and U.S. Central Command issued a press release saying that,” McKenzie said at the hearing, responding to questions from Rep. Trent Kelly (R-Miss.).

However, as The Epoch Times reported at the time, the latter part of McKenzie’s statement is false. CENTCOM statements following the drone strike don’t note civilian deaths.

The first Aug. 29 CENTCOM statement regarding the incident said CENTCOM was “assessing the possibilities of civilian casualties, though we have no indications at this time.”

When media reports trickled out later that day about civilian deaths, CENTCOM issued a follow-up statement that also failed to acknowledge the deaths.

“We are aware of reports of civilian casualties following our strike on a vehicle in Kabul today,” the second statement reads. “It is unclear what may have happened, and we are investigating further.”

The same statements from CENTCOM also say the drone strike eliminated an “imminent ISIS-K threat” to the airport in Kabul, Afghanistan, and that secondary explosions may have occurred—both of which also proved to be untrue.

At the Feb. 9 hearing, Hawley said he found it hard to fathom that such major communication failures could occur between the Pentagon and other government agencies.

“You have the Chairman of the Joint Chiefs of Staff and the President of the United States out there claiming victory. That suggests to me a severe breakdown in process: You’re not informing the President of the United States before he goes out and claims victory that you may have, in fact, killed civilians—or else he did it knowingly anyway,” Hawley said.

“Either way, we have a big, big problem.”