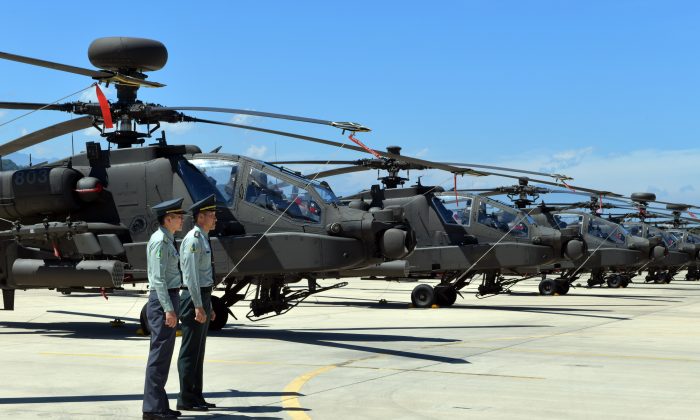 Two Taiwan servicemen stand in front of U.S.-made Apache AH-64E attack helicopters during a commissioning ceremony at a military base in Taoyuan City, Taiwan, on July 17, 2018. (Sam Yeh/AFP/Getty Images)
US

Randall Schriver, the Pentagon’s top Asia official, reaffirmed the strong relationship between the United States and Taiwan, while discussing Taiwan’s important role in the United States’ defense strategy in the Asia-Pacific, in a talk given at the Heritage Foundation in Washington on July 18.

Schriver, assistant secretary of defense for Asian and Pacific security affairs, was at a seminar entitled “The Opportunities and Challenges of Cross-Strait Relation,” attended by several American and Taiwanese scholars, as well as Cheng Ming-tong, minister of Taiwan’s Mainland Affairs Council, which is in charge of policies concerning China relations.

Back in June, U.S. Defense Secretary Gen. Jim Mattis spoke at defense summit in Singapore about U.S. commitments to “deepening alliances and partnerships” in the Indo-Pacific region.

Schriver said that Taiwan plays an integral part in that strategy.

“Taiwan is a partner in promoting a free and open Indo-Pacific and can make valuable contributions,” said Shriver, who added that the U.S strategy is about “freedom from undue pressure or coercion.”

Schriver was alluding to recent tactics by the Chinese regime to pressure Taiwan, including urging Taiwan’s diplomatic allies to drop relations with the island nation, encouraging the isolation of Taiwan from international organizations, conducting military exercises in the Taiwan Strait, and having Chinese bombers circle Taiwan in May.

“Beijing is taking a path that is not as constructive as the path of dialogue. So this is of concern to us,” Schriver said.

Beijing views Taiwan as a renegade province that is part of China’s territory, even though Taiwan is a multiparty democracy with its own elected president, constitution, currency, and military.

The United States, after severing official diplomatic ties with Taiwan in recognition of Beijing in 1979, has maintained a non-diplomatic relationship with the island country based on the Taiwan Relations Act, passed by Congress and signed into law by former U.S. President Jimmy Carter in April 1979.

The United States has also continually sold military weapons and equipment to Taiwan for its defense, much to Beijing’s ire.

This year, Taiwan lost two diplomatic allies—the Dominican Republic and Burkina Faso—after China promised mass sums of investments and loans and pressured them to break ties with the island.

Taiwan could potentially lose more allies among the Pacific Islands as China has stepped up its political, economic, and military presence in the region, according to a report by the U.S.–China Economic and Security Review Commission (USCC) in June.

The relationship between the United States and Taiwan deepened in March, when President Donald Trump signed into law the Taiwan Travel Act, which allows more high-level exchanges between officials of both countries.

Taiwan has also been a reliable partner in the United States’ denuclearization efforts in North Korea, said Schriver, who explained that Taiwanese authorities have been helpful in investigating North Korean front companies and shady transactions designed to evade sanctions.