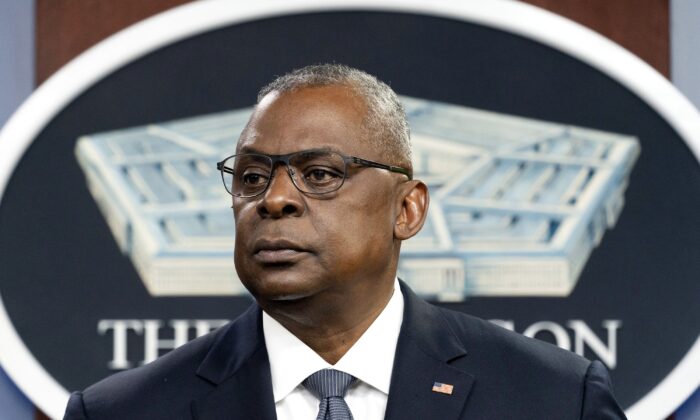 Secretary of Defense Lloyd Austin pauses while speaking during a media briefing at the Pentagon, on Nov. 17, 2021. (Alex Brandon/AP Photo)
Executive Branch

The Department of Defense (DOD) on Friday tightened its COVID-19 restrictions in the midst of a rise in cases nationwide and days after Secretary Lloyd Austin tested positive for the virus.

Starting Jan. 10 at 5:00 a.m., the Pentagon will reduce its occupancy limit to 25 percent or fewer, while social distancing will stay at six feet. Personnel, including fully vaccinated people, will have to wear a mask indoors unless alone in an office, eating or drinking, or in several other circumstances, according to two memorandums issued by the DOD.

In a memo to staff (pdf), Deputy Defense Secretary Kathleen Hicks told all supervisors to use the maximum number of telework opportunities as well as flexible scheduling.

“It is my intent for you to comply with this limit to the fullest extent possible,” Hicks wrote in the directive. “We are experiencing a rapidly evolving situation and your carefully considered requests for exception from the occupancy rate may be granted by the [Director of Administration and Management of the U.S. Department of Defense]  but must be limited to mission-critical activities and must explain why alternatives to a higher occupancy rate are insufficient.”

For the past several months, the Pentagon operated under a directive that allows 40 percent of personnel to work in the building while the rest teleworked.

“Significant upward trends, the rise in positive case counts, including the current spread of the Omicron variant, as well as the consideration that the majority of our workforce is fully vaccinated, weighed heavily in the decision to adjust safety plans,” Michael Donley, the Director of Administration and Management, in a memo to senior Pentagon leadership, wrote in a separate memo (pdf).

An official with the World Health Organization, citing studies, said earlier this week that because Omicron primarily infects the upper respiratory tract, it’s less likely to cause severe pneumonia.

And the latest directive will allow the DOD to “maintain force health protection measures mitigating the spread of COVID-19 in our own communities, among our military personnel, DOD civilian employees, and on-site contractor workforce,” Donley also wrote.

Earlier this week, Austin confirmed that he tested positive for COVID-19, caused by the CCP (Chinese Communist Party) virus. Austin, who is fully vaccinated and received a booster dose in October 2021, said he has mild symptoms.