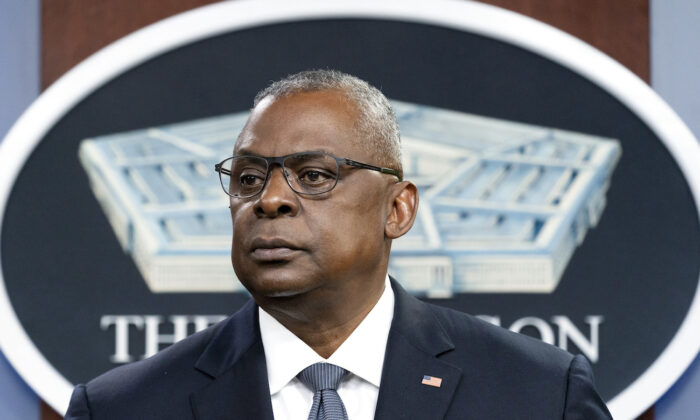 Secretary of Defense Lloyd Austin pauses while speaking during a media briefing at the Pentagon, in Washington, on Nov. 17, 2021. (Alex Brandon/AP Photo)
US News

Defense Secretary Lloyd Austin ordered the Department of Defense to develop an action plan to improve how it can prevent, mitigate, and respond to civilian casualties caused by U.S. airstrikes.

In a two-page directive (pdf), Austin asked top civilian and military officials to provide him within 90 days a “Civilian Harm Mitigation and Response Action Plan.”

The action plan would outline steps and resources required to implement recommendations that had been issued from recently-completed, Pentagon-sponsored studies of civilian harm, as well as evaluations from the DoD’s Office of the Inspector General, and independent reviews that Austin had directed into strikes that led to civilian casualties.

The move comes after a botched drone airstrike on Aug. 29 in Kabul, Afghanistan, that killed 10 innocent Afghan civilians, including seven children.

U.S. Central Command had initially announced the strike targeted a member of the ISIS terrorist group, after the group had claimed responsibility for an attack that took place on Aug. 26 outside the gates of Hamid Karzai International Airport in Kabul, killing 13 American troops and more than 100 Afghan nationals.

McKenzie in September 2021 apologized for the strike.

“We now assess that it is unlikely that the vehicle and those who died were associated with ISIS-K or were a direct threat to U.S. forces,” he said at the time. “I offer my profound condolences to the family and friends of those who were killed.

“This strike was taken in the earnest belief that it would prevent an imminent threat to our forces and the evacuees at the airport. But it was a mistake, and I offer my sincere apology. As the combatant commander, I am fully responsible for the strike and this tragic outcome.”

Austin said in his memo on Thursday that the end of the U.S. military’s mission in Afghanistan, alongside other factors, offers new opportunities to improve on preventing and mitigating civilian harm.

“We will revisit the ways in which we assess incidents that may have resulted in civilian harm, acknowledge the harm to civilians that resulted from such incidents, and incorporate lessons learned into the planning and execution of future combat operations and into our tactics, techniques, and procedures,” he said.

Earlier on Thursday, the RAND Corporation, a nonpartisan think tank funded in part by the federal government, released a report that said the Pentagon “is not adequately organized or resourced to sufficiently assess, reduce, and respond to civilian-harm incidents.”

Per the RAND Corp. report, institutional changes include creating positions in the military that are dedicated to protecting civilians; improving data collection and analysis; and having an improved guidance to investigate and respond to civilian-harm incidents.

The report says there should be a standardized civilian-harm operational reporting process put in place, which should retain critical information to enhance learning from previous incidents.

Researchers also said in the report that the Pentagon had limited distribution of their investigations of civilian harm-incidents, which limits the ability of military members to avoid repeating mistakes.

“In interviews, RAND researchers found that even personnel involved in an incident often never received investigation results, and thus could not learn anything from them,” the think tank announced in a release.