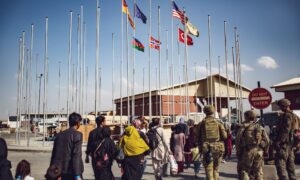 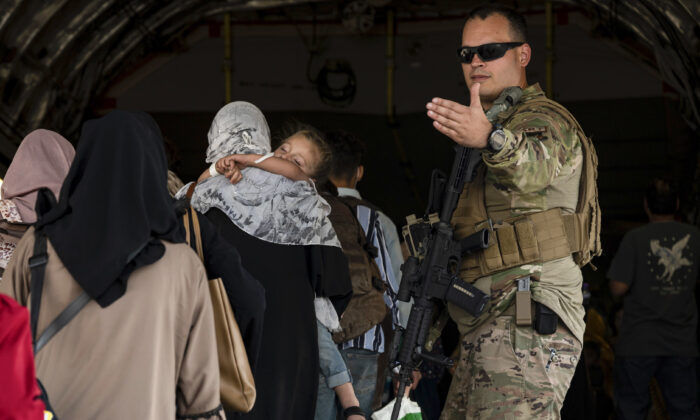 Pentagon Starts Drawing Down US Forces From Afghanistan as Deadline Looms

The troops were a mix of soldiers flown in after the Taliban took over the country to help with evacuations of noncombatants and soldiers who were already there before the terrorist group pummeled the Afghan military and took the presidential palace in Kabul.

Navy Rear Adm. Peter Vasely, “in trying to manage time and space at the airport, determined that it was the prudent thing to do,” Pentagon spokesman John Kirby told reporters in Washington on Wednesday. Vasely decided that “he didn’t need them any more.”

Kirby described the troops as “headquarters staff personnel, maintainers, and some other enabling forces.”

Vasely is overseeing the mission in Afghanistan, where U.S. troops are racing to evacuate Americans and Afghans before the Aug. 31 withdrawal deadline that President Joe Biden imposed earlier this year and reaffirmed on Tuesday.

The force in Kabul now numbers 5,400, down approximately 400 from its peak.

Most U.S. troops had left Afghanistan by Aug. 14, when the Taliban seized the country, but thousands flew back to help secure Hamid Karzai International Airport and evacuate American citizens and others.

Some troops have been conducting missions to grab people who are unable to reach the airport, which is surrounded by Taliban militants.

A helicopter mission was launched overnight “under the cover of darkness,” Major Gen. Hank Taylor told reporters in Washington on Wednesday. U.S. troops rescued a group of less than 20 and got them to the airport safely, he said.

It wasn’t clear if any of the group were Americans.

Similar missions have been launched in prior days, including a multi-chopper mission to the nearby Baron Hotel to rescue a group of 169.

Plans on Tuesday were thrown off by a secret visit by two congressmen, Reps. Seth Moulton (D-Mass.) and Peter Meijer (R-Mich.), Kirby said. The representatives spoke with troops and commanders and needed to be protected.

Moulton and Meijer said in a joint statement that it wouldn’t be possible to complete evacuations even by Sept. 11, much less the Aug. 31 deadline. But the United States is moving forward with the aim of getting out by the end of the month, after President Joe Biden said in Washington on Tuesday that the deadline is remaining in place for now.

The current pace of evacuations is contingent on coordination with the Taliban, Biden said, and there’s increasing danger from outside groups, including ISIS-K, an ISIS affiliate. Taliban militants have stopped some Americans and Afghans, with some assaulting those trying to get through checkpoints.

If the deadline doesn’t change, the drawdown will likely continue, as the military needs at least several days to get their forces and equipment “safely and effectively retrograded,” Kirby said this week.

Taylor said that the final days before the deadline would include evacuations but would focus on removing troops and equipment.

U.S. allies have tried convincing Biden to push back the deadline but have so far been unsuccessful. When U.S. troops leave, other countries will have to as well, even if they want to continue evacuations, German Chancellor Angela Merkel told reporters on Tuesday.

And a French official added Wednesday that the country would likely have to end French evacuations “a few days or a few days” before Aug. 31, given the “full pullback” of foreign forces.