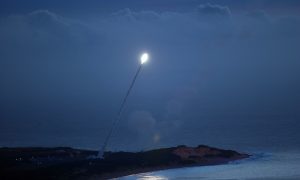 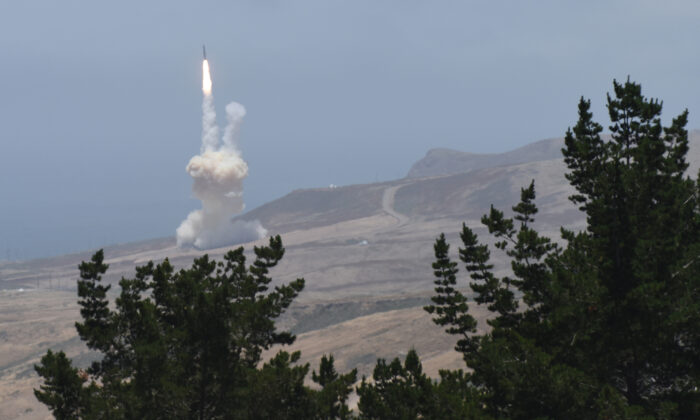 A ground-based interceptor is launched from Vandenberg Air Force Base, Calif., on March 25, 2019. (Department of Defense)
National Security

Pentagon Starting from Scratch With Next Generation Missile Interceptors

The forty-four interceptors that stand sentinel over the American homeland, ready to shoot down a rogue nuclear missile, are getting tired and old.

After pulling the plug on the upgrade last year, the Pentagon is now starting from scratch with the development of a next-generation replacement.

Details of that top-secret Next Generation Interceptor (NGI) are deliberately scant, but it will need to neutralize threats from future advances in missile technology from North Korea or Iran.

Some analysts, however, are worried whether the fresh watch of interceptors—with their as yet unproven technology—will be ready in time to replace the old ones.

The NGI was announced on April 24 by the Missile Defense Agency (MDA)—the heir to the Reagan-era Strategic Defense Initiative commonly known as Star Wars.

The 1980s Star Wars vision of being able to destroy thousands of incoming nuclear missiles has long since faded, but the MDA says it has since developed the capability to strike down a limited number of primitive ballistic nuclear missiles as they arc through space.

That program is known as the Ground-based Midcourse Defense (GMD)(pdf).

“The Missile Defense Agency has expressed confidence in its ability to employ ground-based interceptors against current threats posed by North Korea and Iran,” Timothy Walton, a defense analyst at the Hudson Institute, told The Epoch Times.

“The future challenge, however, is that North Korea and Iran develop and improve countermeasure capabilities, develop a larger salvo size, and improve their ability to fire multiple missiles simultaneously.”

Thus, it would be helpful for the future missile interceptors to have multiple kill vehicles, says Walton, and to be able to distinguish decoys and actual warheads.  “Each missile we fire would fly out of the atmosphere into space, and then release multiple individual kill vehicles that could engage the multiple maneuvering reentry vehicles.”

The capability to intercept multiple warheads with one interceptor missile is likely to be included in the NGI specification, according to Patty-Jane Gellar, a policy analyst in nuclear deterrence and missile defense at The Heritage Foundation. “But we still don’t know much about that because the RFP just came out a few days ago and it’s classified,” she told the Epoch Times.

The Pentagon is seeking proposals and then in July will whittle them down to two that will compete for the final program of record. Northrop and Raytheon have already thrown their hats in the ring with a combined proposal.

Whilst the current interceptors have had minor tweaks and upgrades, some of them have been sitting in their silos in Alaska and California since the system was first deployed in 2004.

The Pentagon was previously working on an upgrade to the business end of the interceptor missile—the third and final stage of the missile called the “kill vehicle” that hones in on and strikes the ICBM out in space.

But the development of that upgrade, called the Redesigned Kill Vehicle, was abruptly ended last year.

“After spending a few billion dollars on that program, the conclusion was that it was a more prudent approach to stop that program and start a new program for the next-generation interceptor—instead of trying to redesign the current one,” said Walton.

But some analysts are worried that the new breed of interceptors, generically known as Exoatmospheric Kill Vehicles (EKVs), might not come fast enough to fix current issues.

“We still have these old EKVs and they’re aging, and we know that by around 2025 they’re going start to have more problems.”

“And then at the same time, North Korea’s arsenal is advancing. We don’t know for sure, but we would expect them to figure out how to deploy more countermeasures, like decoys and penetrating devices to overcome our missile defenses.”

The NGI’s original 2030 fielding date has been pulled to 2028, she says. “But we’re still going to have this short term problem of what to do with our EKVs in the mid-2020s.”

Geller says this should be ringing alarm bells in Congress and the administration.

“I worry about hedging our bets on getting this next generation interceptor by 2028, regardless of whether it’s a great program or not,” she says. “I think we need to do more in the short term.”

But the NGI isn’t the only ICBM defense being developed by the MDA.

“The Missile Defense Agency has also stressed that they’re going to be deploying a layered homeland ballistic missile defense system,” says Walton. “They want to have what they call an underlay to the ground-based interceptors.”

That underlay would use adapted Aegis and THAAD missile defense systems to destroy ICBMs that leak through the first line of defense.

The Aegis SM3 IIA missile, currently deployed in Japan, can pick off ballistic missiles in space and is due to be pitted against an ICBM surrogate in a test flight this year.

“We’re very confident that this will be able to intercept an incoming ICBM,” says Geller.

The MDA also hopes to adopt THAAD interceptors, which destroy missiles in their terminal phase within the atmosphere, that can be adapted to form a third and final shield.

Walton says that if the SM3 IIA tests are successful, it “would provide an important capability throughout the first half of these 2020s and mid-2020s, while the Next Generation Interceptor is developed.”

The need for a couple of safety nets also chimes with some skepticism about the effectiveness of current systems.

“Although the GMD system is praised by senior military leaders and is generally viewed in successful terms, it does have a somewhat mixed flight test record,” according to a 2019 primer (PDF) by the Congressional Research Service.

Hitting a Bullet with a Bullet

Walton says that kind of chequered track-record of test flights is to be expected with this kind of program.

He says that there are other criticisms around the limitations of the tests.

“Sometimes individuals allege that the flight tests aren’t operationally representative for a number of reasons. In particular, they will contend that they don’t account for a realistic adversary launch doctrine,” he says. For example, the tests may not replicate the difficulty in predicting a launch or the number and type of countermeasures, such as decoys and jammers that accompany an actual nuclear ICBM attack.

Geller agrees that some of the short-falls come from the technical challenges. “You’re having to hit an incoming bullet with your own bullet. So it’s no secret that it’s very challenging.”

But she thinks there are other historical reasons for the technology lag: namely, the influence of treaties and politics. “I think that started with the anti-ballistic missile treaty, the ABM treaty, that was signed with the Soviet Union in 1972.

“There’s been this battle since the 1960s: Should we restrict U.S. defenses against Russia, the Soviet Union, in favor of mutually assured destruction (MAD) and strategic stability? Or should we keep advancing our missile defense to try to protect the United States, which is what President Reagan initially proposed in his Strategic Defense Initiative?

Although the ABM treaty allows for one hundred,  the U.S. currently only has forty-four interceptors, with twenty more on the way—enough to cope with rogue states, and maybe the odd trigger-slip from a friend or foe.

“If Russia launches an accidental attack or something like that, of course, we would try to intercept that as well,” says Geller.