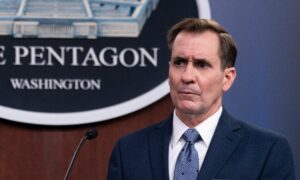 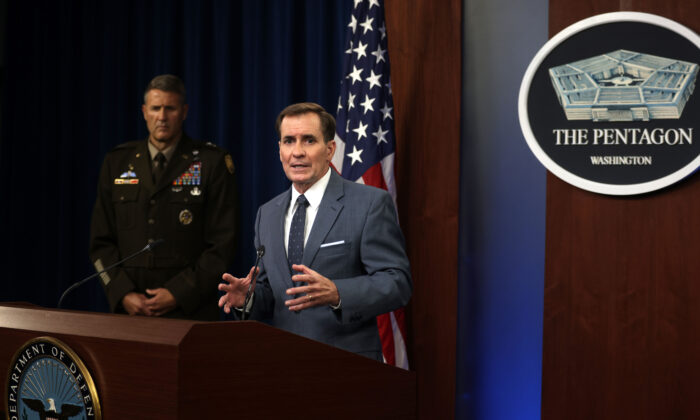 Department of Defense (DOD) spokesman John Kirby denied claims Wednesday that U.S. military forces are relying on the assurances of the Taliban extremist group in its mission to evacuate thousands of Americans still trapped in Afghanistan.

“I’m not going to walk you away from the idea that that’s not important. Of course it’s important,” Kirby told reporters Wednesday in a non-televised briefing, according to a DOD transcript. “But to say that the evacuation all hinges on [the] goodwill of the Taliban I think is to overstate all the efforts that have to go into this.”

There have been reports of Taliban members preventing people from accessing the Kabul airport, where thousands of people have gathered in the hopes of catching a military evacuation flight out of the beleaguered country. In one instance, Taliban members attacked people gathering around the facility, coming in contrast to previous statements that the Biden administration brokered a deal with the group for the safe passage of people.

Meanwhile, the White House is aware of reports that the Taliban have imposed checkpoints across Kabul, making freedom of movement difficult, Kirby said. Some Afghan nationals told CNN’s Clarrissa Ward that the U.S. Embassy has confusing documentation requirements.

“This is one of the reasons why communication with the Taliban is so important. And what I can tell you is we’re not unaware that there [have] been issues out in town and harassment of individuals,” Kirby told reporters. He didn’t go into detail about whether the U.S. military would assist evacuees to reach the airport.

It also comes as the Taliban, which is designated as a terrorist group by some federal agencies, issued a warning that the United States has until Sept. 11—the anniversary of the terrorist attacks that toppled the World Trade Center towers—to evacuate Americans. Suhail Shaheen, a member of the Taliban’s political office, told Sky News on Tuesday that “we are committed not to attack them” in the meantime but didn’t elaborate on the consequences if the deadline passes.

The Biden administration has faced significant backlash from even Democrats over how the withdrawal of American troops is being handled, saying that video footage showing people falling off U.S. military planes while attempting to evacuate will mar the remainder of President Joe Biden’s presidency. Some, including former CIA Director Leon Panetta, said that Biden needs to take responsibility for the sudden collapse of Afghanistan’s government and the botched pullout.

“In many ways, I think of John Kennedy and the Bay of Pigs, you know?” Panetta told CNN on Monday, referring to then-President John F. Kennedy. “It unfolded quickly and the president thought that everything would be fine and that was not the case. But President Kennedy took responsibility for what took place.”

“I strongly recommend to President Biden that he take responsibility and admit the mistakes that were made,” added Panetta, who also served as the Obama administration’s secretary of Defense for two years.

During his only comments on the Taliban takeover on Monday, Biden made little mention of the thousands of Americans reportedly trapped in Afghanistan. While acknowledging that the Taliban’s victory caught the White House by surprise, the president defended his move to withdraw and blamed the Afghan army and government for lacking the willpower to fight back, which also drew condemnation.

On Wednesday, Biden returned to the White House from the Camp David presidential retreat.