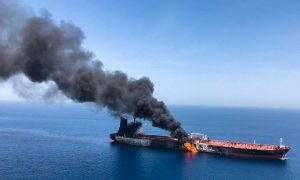 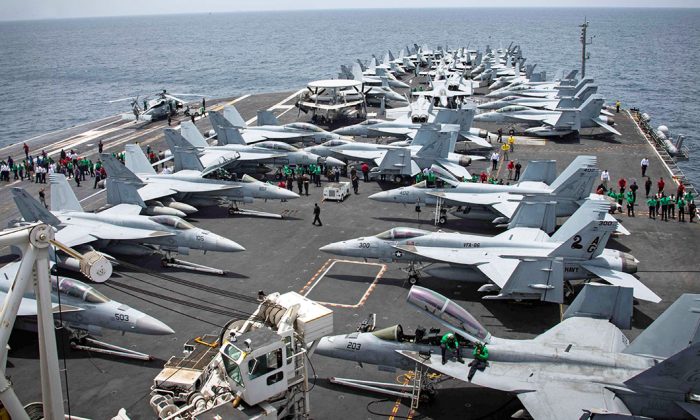 Flight deck of the U.S. aircraft carrier USS Abraham Lincoln in the Arabian Sea, on May 19, 2019. (Garrett LaBarge/U.S. Navy/Handout via Reuters)
US News

A key U.S. Department of Defense official has approved the deployment of extra troops to the Middle East for defensive purposes on June 17.

Acting Secretary of Defense Patrick Shanahan has endorsed a request from the U.S. Central Command (CENTCOM) for additional forces.

“With the advice of the chairman of the joint chiefs of staff and in consultation with the White House, I have authorized approximately 1,000 additional troops for defensive purposes to address air, naval, and ground-based threats in the Middle East,” Shanahan said in a statement.

4 of 4: We will continue to monitor the situation diligently & make adjustments to force levels as necessary given intelligence reporting & credible threats.

The announcement came in response to escalating concerns about a June 13 attack on two oil tankers that Washington suspects Tehran of orchestrating.

U.S. military’s Central Command recently released a video that it claims shows Iran’s Revolutionary Guard removing evidence in the form of an unexploded limpet mine from one of the tankers near the Strait of Hormuz that was set ablaze.

“Iran is responsible for the attack based on video evidence and the resources and proficiency needed to quickly remove the unexploded limpet mine,” Central Command said in a statement, according to Reuters.

Video Shows Iranian Forces Removing Unexploded Mine From Tanker in Gulf of Oman: US Military

“Recent Iranian attacks validate the reliable, credible intelligence we have received on hostile behavior by Iranian forces and their proxy groups that threaten United States personnel and interests across the region,” Shanahan said.

An anonymous U.S. defense official told Reuters the new deployment includes personnel who can strengthen protection of U.S. troops already deployed to the region. It is in addition to a 1,500-troop increase announced last month in response to tanker attacks in May, according to the news wire.

The deployment also includes forces who operate the U.S. military’s airborne intelligence, surveillance, and reconnaissance capabilities, a defense official told Reuters, speaking on condition of anonymity. These capabilities help detect threats and collect sensitive imagery and intelligence, according to the source.

The Trump administration tightened sanctions last May after it withdrew from Obama’s 2015 Iran nuclear deal, ordering trade entities to halt imports of Iranian oil or face being banned from the American markets and financial institutions.

Iran said on June 17 it would soon breach the limits outlined by the deal on how much enriched uranium it could stockpile, which White House National Security Council spokesman Garrett Marquis described as “nuclear blackmail.”

The United Kingdom, Russia, France, China, Germany, and the European Union are still part of the accord, which capped Iran’s stock of low-enriched uranium at 660 pounds (300 kilograms) of uranium hexafluoride enriched to 3.67 percent.

However, Iran’s Atomic Energy Organization (AEO) says that it now intends to store more than the limit.

“We have quadrupled the rate of enrichment (of uranium) and even increased it more recently, so that in 10 days it will bypass the 300 kg limit,” AEO Spokesperson Behrouz Kamalvandi told the country’s state television network. “Iran’s reserves are every day increasing at a more rapid rate … the move will be reversed once other parties fulfil their commitments.”

The Pentagon just announced it’s sending an additional 1000 troops to the Middle East amid heightened tensions with Iran. Comes less than 24 hours after Iran announced it’s going to violate the 2015 nuclear deal, which Trump withdrew from in May 2018. pic.twitter.com/nVqlG0FaAh

The United Kingdom said if Iran breached the agreed limits, London would consider “all options.”

Israel urged world powers to step up sanctions against Tehran swiftly should it exceed the enriched uranium limit.

European Union Foreign policy chief Federica Mogherini said the EU would only react to a breach if the International Atomic Energy Agency formally identified one.

The Hezbollah Cover-Up, and the Bruce Ohr Connection