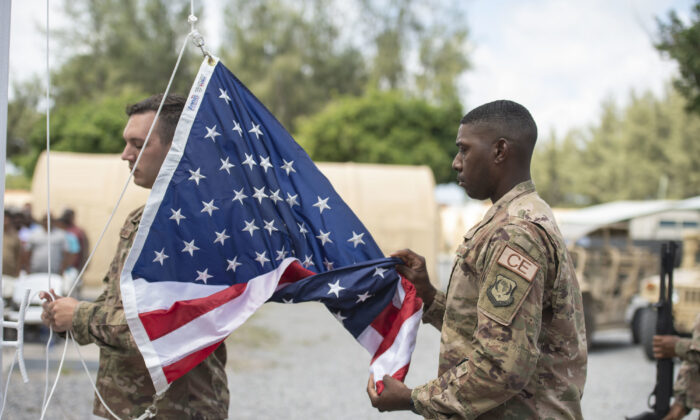 Pentagon Says Terrorists Attacked US Base in Kenya

The U.S. military said an Al-Qaeda-affiliated terror group has claimed responsibility for an attack on a military base in Kenya that houses some American personnel.

There were no reports of casualties among Kenyan or U.S. forces, but several attackers were said to have been killed.

“U.S. Africa Command acknowledges there was an attack at Manda Bay Airfield, Kenya, and is monitoring the situation,” the American military said in a statement.

“Al-Shabaab has claimed responsibility for the incident,” the statement said. “As facts and details emerge, we will provide an update.”

The Kenyan military base, called Camp Simba, has housed U.S. military personnel for years. It’s unclear how many Americans are stationed at the base, which has reportedly been a site for U.S. special operations forces operating in Somalia.

Al-Shabaab is a jihadist terror group based in East Africa that’s affiliated with Al-Qaeda.

The terror group claimed in a statement that attackers had “successfully stormed the heavily fortified military base and have now taken effective control of a part of the base.”

Kenyan military spokesman Col. Paul Njuguna said at least four of the terrorists were killed as their raid was repulsed. Njuguna was further cited as saying that a fire affected fuel tanks at the airstrip, but that’s been brought under control.

“A suicide car bomb reportedly breached the entry to Camp Simba, Manda Bay,” according to a tweet by Voice of America editor Harun Maruf, who posted photos showing a plume of dark smoke rising that was said to be from the scene.

A Twitter user shared footage of flames and dark smoke billowing, allegedly from the affected location.

Al-Shabaab published pictures of masked gunmen standing next to aircraft in flames, Reuters reported, though the images couldn’t be immediately verified.

“Seven aircraft and three military vehicles were destroyed in the attack,” the terror group said in a statement that included photos of damage allegedly from the scene. The jihadist organization also claimed that the raid caused “severe casualties on both American and Kenyan troops stationed there,” although neither Kenyan nor U.S. authorities confirmed they had suffered any casualties.

The Kenya Defence Forces said in a statement that the terror attack had been “successfully repulsed” and that “the airstrip is safe.”

Kenyan authorities said some U.S. aircraft and vehicles had been destroyed.

Lamu county commissioner Irungu Macharia told The Associated Press that five suspects were arrested and were being interrogated.

Based in neighboring Somalia, Al-Shabaab often carries out attacks in Kenya, whose military has committed thousands of troops to fight the terror group.

Kenya sent troops into Somalia in 2011 after a spate of cross-border attacks and kidnappings. The troops were later absorbed into an African Union peacekeeping force, now 21,000-strong, that supports the Western-backed Somali government.

This week, Al-Shabaab gunmen killed three passengers during an attack on a bus in Lamu County, police said.

Kenya’s Indian Ocean coast is a major tourist destination but, given its location close to Somalia, is vulnerable to attacks perpetrated by jihadi extremists.

According to the U.S. military, Camp Simba is operated by the Air Force’s 475th Expeditionary Air Base Squadron, part of the 435th Air Expeditionary Wing.

U.S. Africa Command is responsible for military relations with nations and regional organizations in Africa.