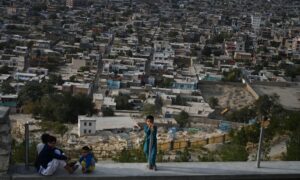 The Pentagon logo seen during a media briefing in the Press Room of the Pentagon in Washington on Oct. 21, 2014. (Paul J. Richards/AFP via Getty Images)
US News

Pentagon Says Taliban Have ‘Not Met Their Commitments’ in Peace Deal

The Pentagon said Thursday that the Taliban have “not met their commitments” in the Afghan peace deal with the United States, including reducing violence and cutting ties with terrorist organizations.

Pentagon spokesperson John Kirby told reporters that the Biden administration believes it is hard to see a way forward for a negotiated settlement with the militant group unless it meets its commitments under the 2020 deal.

Kirby was referring to a four-component peace pact between the United States and the Taliban (pdf) signed in February 2020, which included a Trump administration commitment to the Taliban to remove all U.S. military, intelligence, and contractor personnel from Afghanistan by May if peace-keeping conditions were honored.

The Taliban promised to prevent the use of Afghanistan territory to launch attacks against the United States and its allies, and committed to engage in peace talks with the Afghan government that would eventually lead to a “permanent and comprehensive ceasefire.”

“The Taliban have not met their commitments,” Kirby said at a news briefing. “Without them meeting their commitments to renounce terrorism and to stop the violent attacks on the Afghan National Security Forces … it’s very hard to see a specific way forward for the negotiated settlement, but we’re still committed to that.”

Kirby noted that the Biden administration remains committed to the peace deal, saying that there is “no change” to the U.S. commitments made.

But “the Taliban are not meeting their commitments to reduce violence, and to renounce their ties to Al-Qaeda,” he said.

As long as this is the case, Kirby said, “it’s going to be difficult for anybody at that negotiating table” to remain committed to their promises.

Last year, according to Afghanistan’s human rights commission, killings of civilians in the country’ conflict rose to more than 2,900 last year.

Some senior U.S. commanders have been skeptical of the Taliban’s stated commitment to peace, with the Pentagon noting continued high levels of Taliban violence against the Afghan government and other targets.

In the latest deadly attack in the capital of Kabul, two female Supreme Court judges were gunned down on Jan. 17 on their way to work, according to a statement from the country’s Presidential Palace.

Former President Donald Trump, in a bid to move the process further down the roadmap to a peace settlement, in November ordered a reduction of U.S. troop levels in Afghanistan to 2,500 from 4,500. Military officials have said they are mainly conducting counterterrorism operations.

Christopher Miller, in his final days as the acting secretary of defense said on Jan. 17 that the Pentagon is planning for additional troop reductions to zero by May, adding that “any such future drawdowns remain conditions-based.”

However, Kirby told reporters Thursday that no decision had been made by Biden’s administration about future troop levels in Afghanistan, noting that the Defense Department is currently comfortable with the troop level in the country.

“I would say this to the leaders of the Taliban, that … they make it that much more difficult for final decisions to be made about force presence by their reticence to commit to reasonable, sustainable, and credible negotiations at the table,” Kirby said.