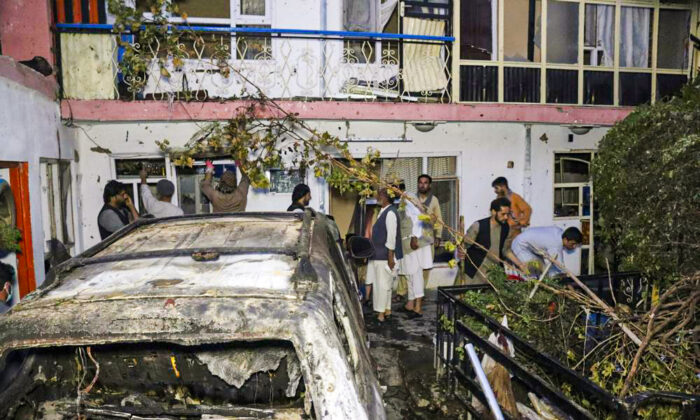 FILE - Afghans inspect damage of Ahmadi family house after U.S. drone strike on Aug. 29, 2021, in Kabul, Afghanistan. An independent Pentagon review has concluded that the U.S. drone strike that killed innocent Kabul civilians and children in the final days of the Afghanistan war was not caused by misconduct or negligence, and it doesn't recommend any disciplinary action, The Associated Press has learned. (AP Photo/Khwaja Tawfiq Sediqi, File)
US News

An investigation into a United States’ airstrike that killed 10 Afghan civilians has found that no war crime was committed in carrying out the attack, a top military official said Nov. 3.

The probe into the Aug. 29 airstrike near the Kabul International Airport was directed by the Secretary of Defense, Lloyd Austen, and carried out by the Inspector General of the Department of the Air Force, Lt. Gen. Sami D. Said.

“It was a mistake,” Said told reporters Nov. 3 when speaking of the strike.

The airstrike killed Zemerai Ahmadi and nine family members, including seven children. Ahmadi, 37, was a longtime employee of an American humanitarian organization.

Under international law—military necessity, distinction, and proportionality—broadly dictate what is considered legal use of force in armed conflict.

“Had I found an individual that failed to perform to the level of criminal misconduct, or criminal negligence, and that was the cause of failure of this whole thing, we would’ve spun that off into an investigation into an individual,” said Said.

The lieutenant general added it was execution errors and communication breakdowns that lead to the loss of civilian life, and that the conclusions of the investigation do not prevent the chain of command from performing disciplinary actions against those involved in the strike.

The report of the investigation remains classified as the procedures for executing such strikes are classified.

Said said the probe examined all the relevant imagery, intelligence streams, and chat communications between those in the strike cell, and conducted 29 interviews under oath, including 22 with individuals directly involved with the strike.

The defensive over-the-horizon strike took place days after two suicide bombers attacked crowds flocking to the Kabul airport Aug. 26 to flee the Taliban takeover of Afghanistan in the wake of U.S. troop withdrawal from the country. The bombers killed 13 U.S. troops and at least 60 Afghans.

The airstrike was launched against a white Toyota Corolla sedan roughly 1.8 miles from the airport.

A misinterpretation of intelligence led to the vehicle being designated as an imminent threat that had explosives in its trunk. The vehicle was also confirmed to have had a laptop bag inside of it similar to that used to carry out the suicide bombing days earlier, according to Said.

The lieutenant general said the airstrike against the vehicle was unique in that it was executed in self-defense, in a limited time window under a “dynamic” situation, making it different to traditional over-the-horizon air strikes.

He said there have been no other strikes like it in the past year.

Said said those operating the strike cells were monitoring multiple threat streams simultaneously at the time of the attack. The white Corolla was monitored for eight hours before the strike was launched.

“I had the luxury of time to review that data over weeks, [those conducting the strike] didn’t …” he said.

“They had the same data, but they had to assimilate it, digest it, and make a decision in a matter of hours. So, I have to acknowledge that.”

Said told reporters that if the classified information could be shared “you would agree with me” that the attack was made in error and without malicious intent.

However, he admitted there was physical evidence of a child in the vehicle about two minutes before the launch of the strike.

The lieutenant general said the child is not obvious, unless you are looking for it.

Gen. Mark Milley, chairman of the Joint Chiefs of Staff, told reporters two days after the attack that it appeared to have been a “righteous” strike and that at least one of the people killed was a “facilitator” for the Islamic State group that carried out the suicide bombing.

Marine Gen. Frank McKenzie, head of U.S. Central Command, admitted at a Sept. 17 news conference that the attack was launched in error.

Said said an analysis of secondary explosions caused by the strike shows that they were muted, but he added the consensus among everyone he interviewed was that “this one was more pronounced than usual,” referring to the explosion.

He suggested it could be caused by something other than explosives in the trunk, like a propane tank.

The investigation’s report makes three recommendations on how to avoid future loss of civilian life during time-restrained, over-the-horizon strikes.

They are: implementing procedures in a strike cell that mitigate the risk of confirmation bias; sharing information outside of the cell to crosscheck situational awareness; and review the process of how assessments of the presence of women and children are conducted during an attack that involves an imminent threat.