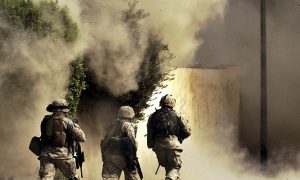 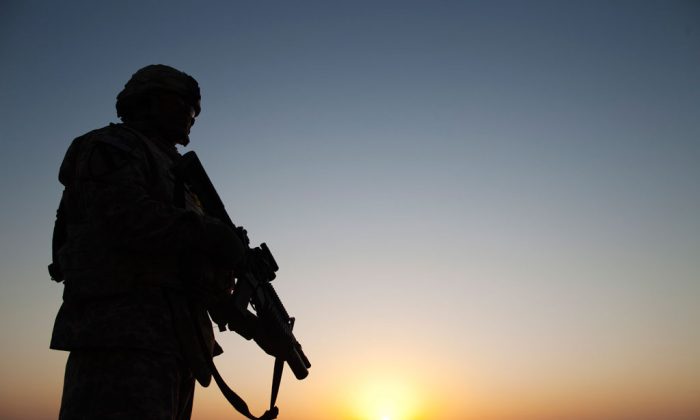 Specialist Dante Battle from the 3rd Brigade Combat Team, 1st Cavalry Division, secures the perimeter outside of a Mine Resistant Ambush Protected (MRAP) vehicle on the way to cross the Kuwaiti border as part of the last US military convoy to leave Iraq on Dec. 18, 2011, near Nasiriyah, Iraq. (Lucas Jackson/Getty Images)
Middle East

WASHINGTON—The Pentagon warned Congress on Thursday that the long, drawn-out military campaign against Islamic State militants is just beginning and could expand to include modest numbers of U.S. forces fighting alongside Iraqi troops.

Defense Secretary Chuck Hagel and Army Gen. Martin Dempsey, the chairman of the Joint Chiefs of Staff, delivered a cautious assessment of the progress in the three-month-old war against Islamic extremists who brutally rule large sections of Iraq and Syria.

It was more than a status report. President Barack Obama is seeking congressional approval for $5.6 billion to expand the U.S. mission in Iraq and send up to 1,500 more American troops. The administration is also pressing for reauthorization of its plan to train and equip moderate Syrian rebels, with that mandate expiring Dec. 11.

Hagel said the coalition, which has grown with 16 new members since September, has made progress, with the militants’ advances stalling and in some instances, reversed by air strikes and other military operations.

But he maintained that the struggle will be long and difficult in what could be a multi-year campaign.

Dempsey said the Iraqi forces are doing a better job, but he said an effort to move into Mosul, now held by IS, or to restore the border with Syria would require more complex operations.

“I’m not predicting at this point that I would recommend that those forces in Mosul and along the border would need to be accompanied by U.S. forces, but we’re certainly considering it,” Dempsey told the House Armed Services Committee.

He added that the U.S. has a modest force in Iraq now, serving as advisers and trainers, and “any expansion of that, I think, would be equally modest. I just don’t foresee a circumstance when it would be in our interest to take this fight on ourselves with a large military contingent.”

Dempsey’s comments echoed his testimony to Congress in September when he raised the possibility of an expanded U.S. role. Obama has said the operation will not involve U.S. ground troops. The types of troops likely to accompany Iraqi forces would be there to call in or direct airstrikes or other close air support.

U.S. and coalition forces have conducted about 900 air strikes in Iraq and Syria as they contend with a core militant force of 15,000 to 18,000 fighters.

“This pressure is having an effect on potential ISIL recruits and collaborators — striking a blow to morale and recruitment,” Hagel said. “We know that. Our intelligence is very clear on that. And as Iraqi forces build strength, the tempo and intensity of our coalition’s air campaign will accelerate in tandem.”

He used the term ISIL, an acronym for the group’s former name, the Islamic State of Iraq and the Levant.

His testimony came as the leader of the Islamic State group, Abu Bakr al-Baghdadi, said in an audio recording posted Thursday that the organization will fight to the last man. It was his first public statement since coalition forces launched airstrikes against his fighters in Iraq and Syria, in which al-Baghdadi allegedly was wounded.

Officials told The Associated Press that Islamic militants and al-Qaeda have agreed on a plan to stop fighting each other and work together against their opponents. That accord could present serious problems for U.S. strategy against the militants.

Dempsey acknowledged the complicated trajectory of the fight.

“This campaign will be marked or characterized … three steps forward, two steps back, and at every step forward or back we’ll debate about the size of the step,” he said.

Obama has authorized the deployment of advisory teams and trainers to bolster struggling Iraqi forces across the country, including into Iraq’s western Anbar province where fighting with Islamic State militants has been fierce. Obama’s plan could boost the total number of American troops in Iraq to 3,100. There are currently about 1,400 U.S. troops there, out of the 1,600 previously authorized.

Lawmakers expressed skepticism about limiting the U.S. deployment to advisers and trainers, with Rep. Howard “Buck” McKeon, R-Calif., the chairman of the Armed Services Committee, arguing that “limiting our advisers to headquarters buildings will not help newly trained Iraqi and Syrian opposition forces hold terrain, much less defeat ISIL in the field. Yet the president has doubled down on his policy of ‘no boots on the ground,’ despite any advice you give him.”

Other lawmakers expressed concerns about the United States getting dragged back into the fight in Iraq, with Rep. Niki Tsongas, D-Mass., pressing the Pentagon leaders about the exit strategy.

“ISIL has to continue to advance to succeed. It has to maintain momentum, and we’ve begun to break that momentum,” Dempsey said.