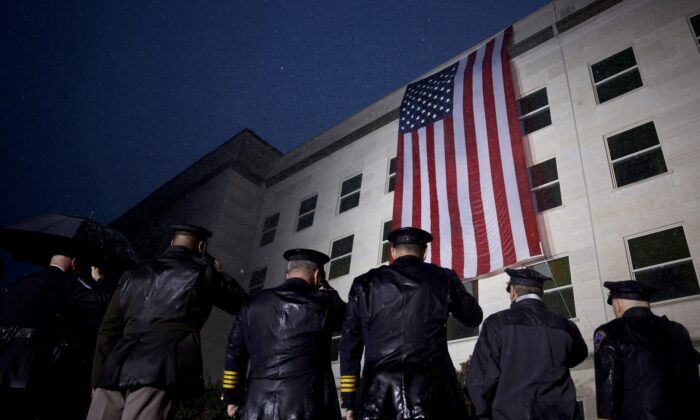 Members of the military and first responders stand in salute as an American flag is unfurled on the side of the Pentagon to commemorate the 21st anniversary of the 9/11 terrorist attacks, in Arlington, Va., on Sept. 11, 2022. (Anna Moneymaker/Getty Images)
US News

The number of sexual assault reports in the United States Armed Forces surged during the fiscal year 2021, according to an annual report released by the Department of Defense (DOD) in August.

The report (pdf) showed that the department received a total of 8,866 reports of sexual assault, which marks a roughly 13 percent increase from the 7,816 reports made in the fiscal year 2020.

Of the 8,866 reports, 7,260 were from active duty members making an “unrestricted or restricted report” of sexual assault for an incident they claimed to have experienced during military service.

The number of sexual assault cases is the highest reported by the department since it began tracking sexual assault and unwanted sexual contact cases in 2006.

“Based on these rates, the Department estimates that 35,875 active duty Service members experienced some form of unwanted sexual contact in the year prior to being surveyed,” the report states.

The department noted that it is unable to “scientifically determine if there was a true increase in the prevalence of unwanted sexual contact for Fiscal Year 2021 due to the change in the metric used to measure sexual assault.” That change was bought about by budget cuts prompted by the COVID-19 pandemic.

The report noted that the department had “sufficient evidence to take disciplinary action in 2,683 cases completed in Fiscal Year 2021.”

In a statement on Twitter on Sept. 2, Pentagon press secretary Air Force Brig. Gen. Patrick Ryder called the figures on sexual assault in the military “tragic and disappointing,” but said that “we can and will change this trajectory.”

He added that Defense Secretary Lloyd Austin and the DOD are “already undertaking unprecedented cultural and organizational change to directly address this problem.”

The report, which comes at a time when the Army is already struggling to take on new recruits, did note, however, that the overall rate of those reported experiencing sexual assault appeared to decrease compared to the fiscal year 2018.

Gen. Joseph Martin, vice chief of staff for the Army, told a House military personnel panel in July that the service may have as few as 466,400 troops in the force by the end of the 2022 fiscal year on Sept. 30, marking a drop of 6,600 from the original target.