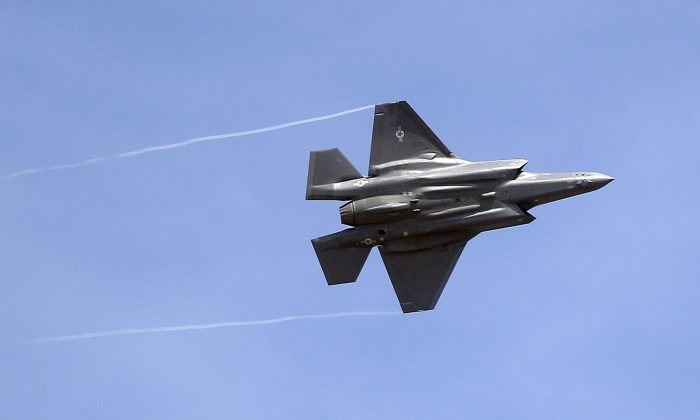 An F-35 jet arrives at its new operational base at Hill Air Force Base in northern Utah on Sept. 2, 2015. (Rick Bowmer/AP Photo)
National Security

The U.S. Department of Defense (DOD) is taking steps to ensure that U.S. defense companies decouple from supply chains involving China as much as possible.

The U.S. military’s reliance on Chinese inputs came into the spotlight earlier in September, when the Pentagon halted deliveries of fifth-generation F-35 fighter jets after it was found that a component used in the engines came from China. The component was a magnet made from a samarium and cobalt alloy originating in China.

The magnets are used on the plane’s turbomachine pumps, which are manufactured by U.S.-based Honeywell International. Honeywell has reportedly identified an alternate supplier for the materials while the Pentagon is expected to issue a waiver to resume F-35 deliveries for now.

William A. LaPlante, U.S. undersecretary of defense for acquisition and sustainment, was asked during a Sept. 9 press briefing why Honeywell hadn’t detected the Chinese component for the better part of the past two decades.

“Any company that says they know their supply chain is like a company saying they’ve never been hacked,” LaPlante said. “So it’s an endless battle.”

He suggested that artificial intelligence and open source tools might be used to track raw materials across supply chain networks in real time.

A big concern for the Pentagon is America’s reliance on China for rare-earth elements that are critical to manufacturing many electronic components in defense products. The United States lost two rare-earth mines in the past decade, located in California and Texas, following competition from China.

To resolve this vulnerability, the Pentagon has awarded contracts to develop a U.S. refinery for rare earth elements to Lynas Rare Earths. The facility is being built in Texas, with the Pentagon fully funding the $120 million price tag. The refinery is expected to start operation by 2025.

Over the past decade, U.S. manufacturing of many defense materials has fallen because of cheaper production in other nations, especially China.

“From 2010–2019, the number of Chinese suppliers in the [U.S. Defense] Department’s supplier base in the sample Govini assessed increased by a total of 420 percent, to 655, across numerous critical industries. In comparison, U.S. companies grew 97 percent, to 2,219,” the report reads (pdf).

The share of Chinese suppliers in critical industries grew from 6 percent to 9 percent during this period. The prevalence of Chinese companies in the Pentagon’s supplier base will make it difficult to identify all instances where these firms are a single-source supplier of key materials or technology, according to the report.

Chinese agents are posing as concerned local Texans online and opposing the construction of the rare earth processing mine in the state, according to an investigation by cybersecurity company Mandiant.

Fake accounts from the agents are spreading propaganda that the Lynas plant would cause environmental damage and expose the local population to radioactive contamination resulting in risks such as gene mutation and cancer.