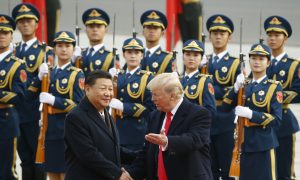 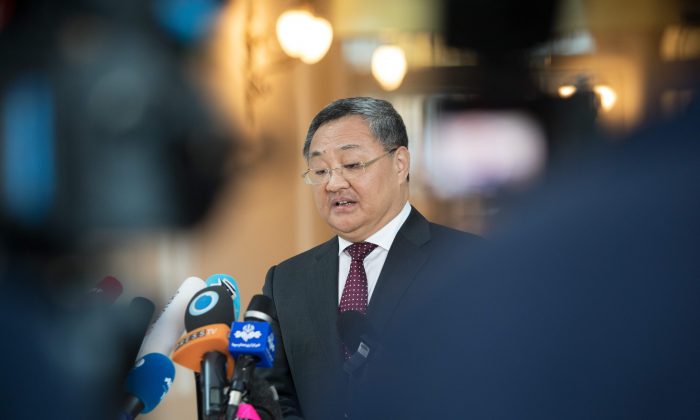 Fu Cong, Chinese military official at the Ministry of Foreign Affairs, speaks to the media at the Palais Coburg in Vienna, Austria, on July 28, 2019. (Alex Halada/AFP/Getty Images)
US-China Relations

China has vowed to take countermeasures if the United States follows through on a plan to deploy midrange ground-launched missiles in Asia.

The director of the Chinese foreign ministry’s Arms Control Department, Fu Cong, made the statement on Aug. 6 after the United States formally withdrew from the Intermediate-Range Nuclear Forces (INF) treaty with Russia on Aug. 2, and announced plans to deploy missiles in order to deter China.

“China will not stand idly by and be forced to take countermeasures should the U.S. deploy intermediate-range ground-based missiles in this part of the world,” Fu said.

U.S. Defense Secretary Mark Esper told reporters in Asia over the weekend that he wants to deploy ground-launched missiles “within months” and stressed these weapons’ importance to the military theater in the Asia-Pacific region. Esper and Secretary of State Mike Pompeo both stressed that the goal of the deployment is deterrence.

While the United States was bound by the INF treaty from possessing and flight-testing ground-launched intermediate-range missiles, China aggressively developed and deployed these weapons.

Fu argued that none of China’s intermediate-range missiles can reach the continental United States. The Chinese missiles are nevertheless within striking range of many U.S. allies and hundreds of U.S. military bases and installations in Europe, Asia-Pacific, and the Middle East.

“China has deployed hundreds of such missiles in the area when the United States had very little. So the country that is being the aggressor and causing the threats is China, not the United States,” said Peter Huessy, director for strategic deterrent studies at the Mitchell Institute for Aerospace Studies.

Fu didn’t give details on the countermeasures that China would take. Beijing has previously taken economic measures to punish South Korea for installing a U.S. anti-missile defense system.

Esper told reporters in Tokyo that he hadn’t discussed the deployment of the missiles with foreign leaders. An operational deployment would take “a few years,” he added.

“I have never asked anybody about the deployment of missiles in Asia,” Esper said. “I never asked, they never declined. We are quite some ways away from that.”

Russian President Vladimir Putin has called for urgent talks to prevent an arms race in the wake of the U.S. withdrawal from the INF. Russia also said it would take countermeasures if the United States deployed missiles in Asia.

When President Donald Trump ordered the withdrawal from the INF in 2018, he said the United States will have to develop treaty-barred weapons because both China and Russia were doing so. The president said that both nations would have to be part of any new arms pact.

After the United States formally withdrew from the treaty on Aug. 2, Trump said he had spoken to Putin and Chinese leader Xi Jinping about a nuclear arms treaty; both leaders were “excited” about the potential deal, Trump said. A nuclear deal won’t cover intermediate-range missiles armed with conventional warheads, the type of missile the Pentagon intends to deploy in Asia-Pacific.

Fu said on Aug. 6 that China doesn’t intend to enter into talks about reducing nuclear arms. He alleged that China has a much smaller nuclear force compared to the United States and Russia.

“I don’t think it is reasonable or even fair to expect China to participate in an arms reduction negotiation at this stage,” Fu said.

China has an estimated 290 nuclear warheads deployed, compared to 1,600 for Russia and 1,750 for the United States, according to the Federation of American Scientists.

China has never revealed how many nuclear warheads it has. According to a former commander of Russia’s Strategic Rocket Forces, China between 1,600 and 1,800 nuclear warheads.

The United States withdrew from the INF after years of alleged violations by Russia. Washington claims that Moscow flight-tested and deployed an intermediate-range ground-launched system. Moscow continues to deny the claim, but hasn’t allowed Washington to test the missile in question.

China, in the meantime, has continued to pour resources into the program and has made significant technological strides, including an anti-aircraft carrier missile. China’s missile arsenal is its ace-in-the-hole in the event of open conflict, as neither its air force nor navy can stand up to the United States and its allies.

“China’s threat to retaliate against U.S. missile deployments is real because its wants to retain superiority in Asian theater missile weapons,” Rick Fisher, a senior fellow at the International Assessment and Strategy Center, said in an email to The Epoch Times.