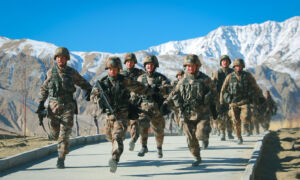 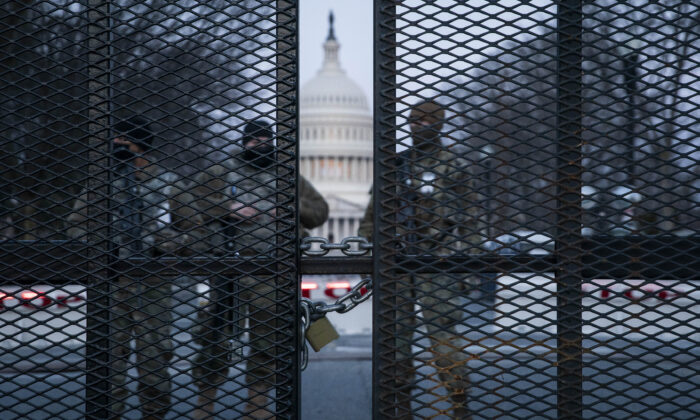 Before sunrise members of the National Guard stand behind a barbed wire fence permitter surrounding the Capitol in Washington on March 4, 2021. (Sarah Silbiger/Getty Images)
US News

Pentagon: National Guard Deployment at US Capitol to End

The Department of Defense confirmed on May 19 that the National Guard mission that was set up at the U.S. Capitol following the Jan. 6 breach will end on May 23.

Pentagon spokesman John Kirby told reporters during a briefing that the deployment is expected to wrap up by that date.

“We have received no request to extend it,” he said, referring to the National Guard deployment around the Capitol. He also said that around 2,100 National Guard troops remain from the original 5,000-plus that were positioned following the breach.

Secretary of Defense Lloyd Austin in March had received a request from the Capitol Police to extend the Guard’s deployment until May 23, which was approved.

In addition to the troops, fencing was also erected around the building. Both the fencing and military posture was criticized by Republicans, and several GOP governors ordered their Guard personnel to return home starting in late January.

“I’m not aware of any—any—threat to justify a continued presence today around the capital, much less into the fall,” Sen. Tom Cotton (R-Ark.), a former Army Ranger, told Fox News in February, adding that he believed the military was deployed for political purposes.

Keeping the National Guard there was “outrageous because that’s not their function. It’s not their mission,” Sen. James Inhofe (R-Okla.) told reporters in March.

Some Democrats also expressed alarm over the mission.

“We cannot ignore the financial costs associated with this prolonged deployment, nor can we turn a blind eye to the effects it will soon have on the National Guard’s overall readiness,” said Rep. Adam Smith (D-Wash.), chairman of the House Armed Services panel, earlier this year.

Gen. Daniel R. Hokanson, chief of the National Guard Bureau, wrote in a letter to the Pentagon that the National Guard shouldn’t adhere to a Capitol Police request to keep Guard members at the capitol. He noted that the Guard is overburdened due to civil disturbances, COVID-19, and wildfires.

“I am concerned that the continued indefinite nature of this requirement may also impede our ability to man future missions as both adjutants general and Guardsmen alike may be skeptical about committing to future endeavors,” he said in a March memo.

Amid the criticism in March, House Speaker Nancy Pelosi (D-Calif.) stated that the National Guard should remain “as long as they are needed.”

“We have to have what we need when we need it, and in the numbers that we need,” she said at the time. “But that’s a security decision.”