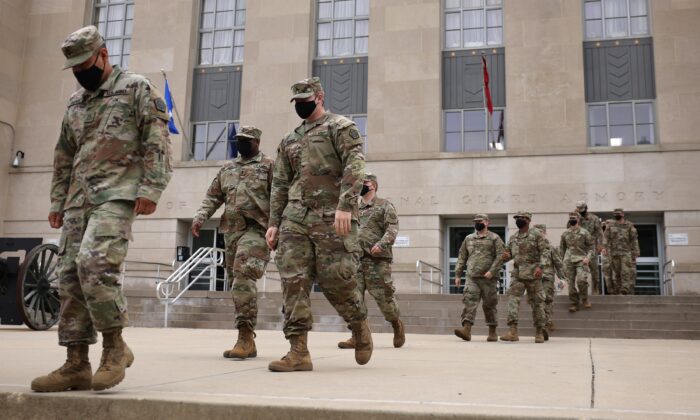 National Guard troops leave Washington after being stationed there for four months following the Jan. 6, 2021, breach of the U.S. Capitol, on May 24, 2021. (Kevin Dietsch/Getty Images)
District of Columbia

National Guard troops may be deployed in the Washington D.C. area to help deal with trucker convoys expected to arrive as soon as Feb. 23, a Pentagon official said Tuesday.

“The Department is analyzing a request for assistance from the US Capitol Police and the DC Homeland Security and Emergency Management Agency,” John Kirby, the Department of Defense’s spokesman, told news outlets in a statement.

“Those agencies have asked for National Guard personnel to provide support at traffic control points in and around the District to help the USCP and DC government address potential challenges stemming from possible disruptions at key traffic arteries. No decisions have been made yet to approve these requests,” Kirby added.

The Capitol Police and the Washington law enforcement agency did not respond to requests for comment.

Kirby did not detail how many Guard personnel have been requested.

Multiple convoys are planning treks to the Washington area, with one organizer telling The Epoch Times that his group plans to arrive on Wednesday.

Bob Bolus, the organizer, said the convoy he plans on leading will travel on the Capitol Beltway and not venture into downtown Washington due to concerns over how they’d be treated by law enforcement and the judicial system. Bolus said the convoy would “shut it down,” referring to the Beltway, which encircles Washington and runs through Maryland and Virginia.

Another convoy was scheduled to depart from California on Wednesday and reach the Washington area in early March.

Capitol Police officials said recently that they and other law enforcement officials in the nation’s capital were planning extra security ahead of President Joe Biden’s State of the Union address on March 1.

“Law enforcement agencies across the National Capital Region are aware of plans for a series of truck convoys arriving in Washington, D.C., around the time of the State of the Union,” the agency said, adding, “As with any demonstration, the USCP will facilitate lawful First Amendment activity.”

No decision had been made on whether to reerect fencing around the Capitol, according to USCP.

Spokespersons for the Maryland and Virginia state police told The Epoch Times in emails that they were aware of the convoys and were working to prepare for possible disruptions.

The U.S. convoys are inspired by convoys that gathered in Canada in January to protest against COVID-19 vaccine mandates.

On Feb. 19, the Canadian government moved to clear out protesters in Ottawa, arresting some. Prime Minister Justin Trudeau’s administration also imposed the first use in history of the Emergencies Act, using it to freeze the bank accounts of protesters.