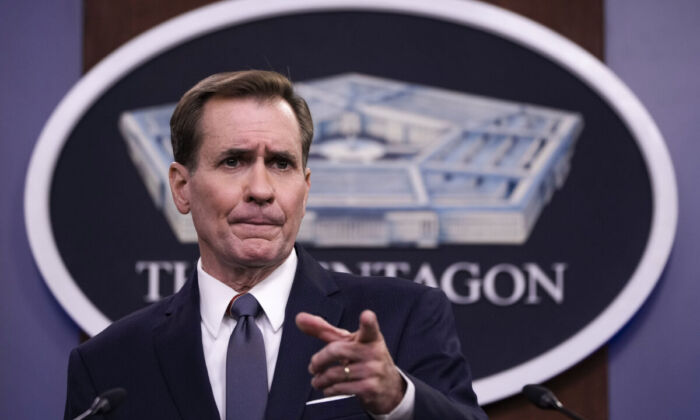 Department of Defense officials are reviewing their options after a federal judge this week blocked the military from punishing a group of Navy SEALs who are seeking religious exemptions to the Pentagon’s COVID-19 vaccine mandate.

“We are aware, of course, of the injunction and we’re reviewing it and in discussions with the Department of Justice as to what options might be available to us going forward,” Pentagon spokesman John Kirby told reporters in Washington on Tuesday.

A group of Navy personnel filed the suit last year, arguing the administration’s religious exemption process was a sham because none had been granted.

U.S. Judge Reed O’Connor, a George W. Bush nominee, agreed, alluding to how the Navy has granted just one religious accommodation request since 2015 and none for the COVID-19 vaccine mandate.

“The Navy provides a religious accommodation process, but by all accounts, it is theater. The Navy has not granted a religious exemption to any vaccine in recent memory. It merely rubber stamps each denial,” O’Connor wrote as he entered a preliminary injunction against the military branch.

The way the process for adjudicating exemption requests is set up, the judge added, means the requests “are denied the moment they begin.”

An appeal would send the case to an appeals court, which would decide whether to uphold the preliminary injunction or overturn it.

The case could eventually go to the Supreme Court, which has so far declined to intervene against any COVID-19 vaccine mandates.

The nation’s highest court, though, is scheduled on Jan. 7 to hear challenges to the Biden administration’s private employer vaccine mandate.

The military’s mandate received a fresh challenge from the state of Texas earlier Tuesday.

Texas Attorney General Ken Paxton sued over the attempt to compel National Guardsmen to get vaccinated, asserting the Guard is under state control unless mobilized by the federal government.

“Neither the President nor federal military officials can order the Governor of Texas and non-federalized National Guardsmen to comply with a vaccination mandate or to direct a particular disciplinary action for failure to comply,” Paxton, a Republican, said in a statement. “This is one of the many examples of federal overreach by the Biden Administration.”

Texas Gov. Greg Abbott, another Republican, ordered the state’s adjutant general not to punish any guardsmen for choosing not to get a COVID-19 vaccine.

The Pentagon has maintained that it does have the authority to force National Guard troops to get vaccinated and a federal judge last month rejected a bid by Oklahoma to block the mandate.